The following is an excerpt from Citizen Akoy: Basketball and the Making of a South Sudanese American by Steve Marantz (February 2019).

Eric Behrens called basketball a “trust game.” By that he meant that its flow—spontaneous and fluid—required teammates to intuit and sense one another. Behrens’s past teams were characterized by balance and distribution on offense, with shots and points spread among three or four players of roughly equal ability, knit by his gospel of trust.

This team was different in that Deverell Biggs was the singular talent, described by Behrens as the “alpha dog.” At 6-foot-1 and 175 pounds, Biggs was athletic enough to be the reigning state high jump champion. As an underclassman on the championship teams of 2007 and 2008 he had been teased about his skinny legs, but he had defended the best player, Josh Jones, in practice. As a junior he had averaged 16.6 points with a flamboyance that once got him a technical foul for hanging on the rim after a putback dunk.

As a senior Biggs would average 21.1 points and bring a dominant personality to the locker room. “Deverell could be demanding of his teammates; he was really competitive,” Behrens recalled. Junior varsity coach Jay Landstrom likened Biggs to nba star Russell Westbrook. “He was a freak athlete, hard-headed and stubborn,” Landstrom said. “He wanted to win at all cost.”

To Biggs, Akoy was the new kid with a huge wingspan and a too healthy self-regard. Akoy didn’t take it well when Behrens did not start him in the first three games. “I was pissed,” Akoy recalled. Nor was he happy with his limited number of “touches” while the offense flowed through Biggs. “If Behrens doesn’t give me the ball, I’m transferring,” he told Hammer.

Biggs may have detected, or imagined, a bit of attitude in Akoy. He may have thought Akoy was slow to catch on to Behrens’s system. “Early on Deverell would drop off nice passes and almost hit Akoy in the face,” Landstrom said. “He got after Akoy.” As Biggs later explained to the Lincoln Journal Star, “I told Akoy he had to watch big men to see how they played. He didn’t have a passion for it.”

The team lost its opener to Burke and its fifth game to Lincoln. Biggs pushed Akoy to raise his game, and by that he meant rebound and block shots. “Once Deverell knew a player was capable of doing something, he wanted it done all the time,” Akoy recalled. “I may not block a shot, and he would be in my face: ‘Akoy, block that shot.’ He was a passionate guy; he didn’t like to lose. Sometimes his tone was angry or he yelled.” After Akoy made a crucial turnover, Biggs exploded, “You can’t do that—what’s the matter with you?”

Akoy struggled with the criticism. One evening Hammer received a call about Akoy from Behrens. “He texted me seventy-five times; he wants to know where to drop off his uniform because he’s done,” Behrens said. “He’s mad because he probably missed a layup he should have made,” Hammer replied. They both chuckled. “Well, I’m going to shut my phone off,” Behrens said.

Behrens, for his part, saw Akoy improve with each game. His defense was ahead of his offense, in part because he was not yet strong enough to post up deep. Defensively he had a rare knack for blocking shots without fouling the shooter. “As soon as you saw him play in a game, you saw his impact in terms of blocking shots,” Behrens recalled.

Behrens pulled Biggs aside for a talk. “He’s a freshman and we need him, and you can’t always beat up on him mentally,” Behrens said. “If you’re hurting his self-confidence, you’re hurting our team. You’re trying to win, but you’re going about it too negative.”

“Look, if we’re going to be good, we need Akoy to be not only good but confident,” Behrens said. “Even if he makes a mistake, we have to say, ‘Don’t worry about it; next time.’ We have to be more positive.” 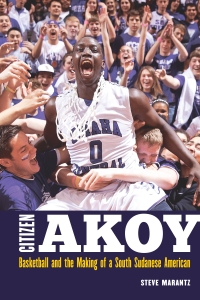 Biggs reconsidered. He knew he had to be a better leader to win state. He knew that wouldn’t happen unless he and Akoy were on the same page. He knew that Akoy’s defense and rebounding were luxuries that enabled him to gamble more on the press. He knew that Akoy’s upbringing was every bit as hard as his with a single mother on the Near North Side. Whatever resentments and misgivings he may have had about Akoy, he locked away. “Something clicked in him,” Behrens said.

From Akoy’s perspective, Biggs “cooled down and we got rolling.” They won five of their last six games after Biggs’s meltdown. They blew through the districts and first round of state with minimal resistance. Fast forward to the state semifinal—the game that forever defines the chemistry between Biggs and Akoy. Their opponent, Lincoln Southeast, was led by Derrius Vick, 6-foot-1 200-pounder whose first sport was football and who would go on to quarterback Ohio University. Southeast was 20–3 and had come to state on a roll.

As expected, the game was a struggle, marked by tenacious defense and numerous lead changes. Biggs carried Central with a career-best 35 points, including consecutive three-pointers that turned a 37–30 deficit into a 39–39 tie. “He might have hit four nba threes in the third quarter,” Behrens recalled. But when Vick sank a pair of free throws with 11.2 seconds to go, Southeast led 52–51.

Then it happened. Biggs took the inbounds pass and split two defenders in the backcourt. He darted across half court toward the basket. As he entered the lane, two defenders were in front of him and another at his left elbow. Biggs went up, and all three defenders lunged to mess up his shot. But the best offensive player in the state did not shoot. No, he flipped a soft pass to a teammate closing on the left side of the lane.

“I actually wasn’t ready,” Akoy recalled. “I was in position to rebound in case he missed. Next thing I know, the ball is coming to me.” Akoy caught the pass and put it in—no rim, only net. In Behrens’s words, he “put it up with a little touch.” Central won 53–52. Akoy scored the winning basket on an assist from Biggs!

As pandemonium overtook the Central crowd, the meaning of the play sank in. Biggs summed it up best when he told a reporter, “I was trying to shoot the rock, but I saw Akoy. He was right there and I trust him.”

Behrens saw it the same way. “I don’t know if Deverell makes that pass the first game of the year,” Behrens told me. “He scored 35 points, and he dished it off. Obviously he trusted Akoy at that point. And if Akoy misses, it was still the right play.”

The stunning semifinal finish made Central’s victory over Norfolk in the state final almost anticlimactic, except that Akoy’s stat line—18 points, 15 rebounds, 9 blocks—stamped his passport to stardom and gave him his first ring.

In the ensuing days, weeks, and months, the game everybody talked about was Lincoln Southeast. Years later, when members of the 2010 team got together, they talked about the Southeast game—and the pass from Biggs to Akoy, senior to freshman, with trust.

“I still can’t believe he passed me the ball,” Akoy said.