The following has been excerpted from Educated Tastes: Food, Drink, and Connoisseur Culture (Nebraska, 2011), a collection of essays edited by Jeremy Strong. This particular essay has been excerpted in honor of the picky eater at your Thanksgiving table.

From “Feeding Finn” by Lisa Harper

After a few months of raising a girl and a boy, it was clear to me that my son differed from my daughter in more than his genitalia. One child differed, fundamentally and biologically from another, in personality, behavior, and preferences in play. My son was more addicted to the human touch, and although I had been warned of this fact—boys are more cuddly, more attached, more sensitive than girls—by the mothers of boys, I’m still not able to say the difference is gender inflected as much as it is my son’s particular disposition and personality. Similarly, until Finn became a picky eater, I refused to believe that what kids were willing to eat was influenced by anything other than their earliest food culture. Hadn’t Misty’s half-Salvadoran children grown up on spicy salsa? Didn’t Yoriko have a child who downed raw fish and rice and shunned most sugar? Didn’t Michelle and Brandon, my most beloved farmers, have a child who ate any raw vegetable they put in front of him? And hadn’t my own culinary adventure with my daughter produced a girl willing to try almost anything?

The answer was yes. And no. Because the truth is closer to what very many parents  have long suspected: Being a neophobe is not simply a matter o nurture. It might be in your nature.

The most recent research into the science of taste has found that not only do we all taste differently (witness the phenomenon of “supertasters,” uncovered in the 1990s, especially by researcher Linda Bartoshuk), but how and what we taste may be genetically coded.10 The Human Genome Project has facilitated the identification of taste receptors, which are located all over the inside of the mouth, not simply on the tongue. And scientists have found further that there are many more than four basic tastes (sour, sweet, salty, bitter), more than four codes that are being sent to the brain. To complicate further the new physiology of taste, how these receptors receive and send information to the brain differs from person to person, within families, and even, it seems, across cultures.11 While it is true that most of these flavor chemists work for large multimillion-dollar corporations, whose job it is to advise the food industry about additives that will make your packaged, processed food taste better—by lowering sugar and sodium content without creating an aftertaste, by enhancing existing sweet flavors, by blocking bitter tastes in, say, cough medicine—the fundamental truth of their wok is important for understanding how our kids eat.

If it is true that how we taste has a genetic foundation, this information has resonance for understanding how young children behave at the table, what children eat and reject, whether or not your child has good taste, and whether the parent has anything to do with it anyway. But while most of these sensory scientists would probably acknowledge that we can learn to like tastes that may initially be unpalatable, the evidence is mounting that a truly picky child is not simply a stubborn, willful one. He is not testing your patience because he is in the midst of his terrible twos (or threes). She does not reject broccoli because it is just a hard vegetable to like. He is not simply a child who hasn’t had an equal opportunity in his food life. The rock-bottom truth may just be that your kid doesn’t have good taste. 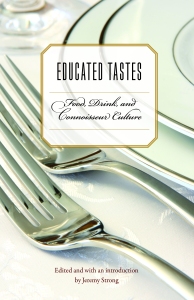 Somewhere in the middle of all the sturm und drang it dawned on me that Finn’s inordinate love of sugar—in any form—was not simply a child’s immature preference. Just as my husband will eat a bag of red licorice or a box of Girl Scout cookies in one sitting, Finn consumed pint after pint of berries, ate easily adult-sized helpings of pie, and lusted with uncommon fervor for chocolate. In fact, long before he could string together two words, before he had even twenty words in his vocabulary, “watermelon” and “chocolatey” were uttered accurately, frequently, and with much passion.

There is other recent research, too, that takes the blame off the parent, concluding that picky eating is inherited and not a product of the child’s environment. In the journal Nutrition, Dr. Lucy Cooke published her findings that seventy-eight percent of neophobic behavior is genetically determined, and only twenty-two percent determined by a child’s environment.12 This suggests clearly that whether or not Finn tried that plate of chard in front of him, it was not my fault. When he took one look at a perfectly well-cooked piece of pork tenderloin and declared emphatically, “Not I like that chicken,” there would be no way I could force, bribe, or cajole him into eating it. I shrugged my shoulders in attempted nonchalance. I let him eat rice. (And cake.) But it still bothered me.

It bothered me because feeding my kids was not simply about keeping them healthy, about giving hem enough nutrition for them to develop strong, healthy bodies and agile brains. Feeding them well was partly about getting ahead of the curve of contemporary American food culture and showing them what is pleasurable about real food, cooked at home. It was about giving them a diverse food culture before they were old enough to be seduced by fast food and take-out and meals on the run and junk food. I thought my children needed a food culture that would help them make good, healthy choices when they went out on their own. I thought it was important to give them a foundation that would ground them for the rest of their lives. Teaching them to eat well was as important to me as teaching them to sleep, to walk, to talk, to read. It would certainly be as important.