C. Richard King is a professor of comparative ethnic studies at Washington State University. He is the author or editor of more than a dozen books, including Redskins: Insult and Brand (Nebraska, 2016), Team Spirits: The Native American Mascots Controversy (Nebraska, 2001), and Native Athletes in Sport and Society: A Reader (Nebraska, 2006).

Daniel Snyder, owner of the NFL franchise in Washington, DC has famously proclaimed that he will never change the name of the team. And, true to his word, the slur remains, accepted by the league, broadcasters, media, and a large portion of the public. Indeed, countless opinion pieces, a powerful new documentary, a growing body of scholarship that undermines the rhetoric and rationale offered by the team and its supporters, empirical evidence of the psychological harm of sport mascots, two decades of legal battles, and a 50 year tradition of resistance to the name by American Indians and their allies, including protests at home and away games, have proven unmoving to many.

In this context, many were understandably caught off guard by the sudden announcement that the team would be changing its name to Redhawks. A press release trumpeting the change announced, “In a time of deep divisions, football has always been and always will be a great unifier. Under the values of courage, commitment, and achievement, the Washington football team is proud to announce the…Washington Redhawks: A mascot everyone can cheer for.” More than cynical public relations move, the announcement continued, “Washington Redhawks” was inspired by team owner Dan Snyder’s deep admiration for Native Americans. “It is a symbol of everything we stand for: strength, courage, pride, and respect—the same values we know guide Native Americans and which are embedded throughout their rich history as the original Americans.”

The surprising news traveled quickly across Twitter and Facebook with links to stories at ESPN, the Washington Post, and Sports Illustrated. One could detect a kind of jubilance on social media—finally some good news, a modicum of justice, an important victory in the fight against anti-Indian racism. Shortly, however, the links were discovered to be simulations and these positive assessments of the announcement were joined by other, more dubious voices, calling it fake news or declaring it a hoax. Nevertheless, talk of the change had become loud enough the franchise felt compelled to issue a statement, “This morning, the Redskins organization was made aware of fraudulent websites about our team name. The name of the team is the Washington Redskins and will remain that for the future.” 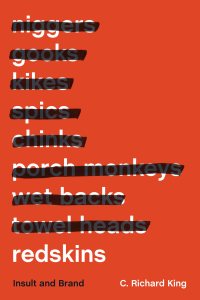 The franchise, of course, had not dropped its use of the slur. Instead, the Redhawks campaign was something of a form of serious play staged by the Rising Hearts Coalition. Its members had engaged in a complex act of brandalism or culture jamming, in which they not only challenged the established branding of the DC professional football team, but also countered many of the prevailing narratives about it as well. As Peggy Nagel, one of the participants in the action noted, “The goal of our action was to flip the conversation from Native advocates having to produce mountains upon mountains of evidence about why the name is offensive, to the NFL having to produce evidence for why the name is defensible”

In a press release, organizers explained their action. Far from fake news, they sought to reframe the team name and rekindle the struggle against it. In part, the action was an expression of a politics of hope, “Y’all the Washington Football team has not changed their name… Keep that brief moment of joy you had upon reading the news to keep fighting against their racist mascot.” As Rebecca Nagle (Cherokee Nation) put it, “We created this action to show the NFL and the Washington Football franchise how easy, popular and powerful changing the name could be.” In part, it was a testament to past efforts and their connection to future resistance, “We acknowledge the generations of Native people and communities who have come before us in fighting this mascot,” states Sebastian Medina-Tayac (Piscataway), whose ancestral lands the stadium currently stands on. “We hope this brief moment inspires our country to imagine a world without racist mascots.”

While derided, the force of this intervention cannot be disputed. The emergence of “Go Redhawks!” as a rallying cry, particularly on social media, speaks to the power of the action, made material at a rally before the DC hosted Arizona on the 17 December. More important, introducing the Redhawks not only has revived public discussion, making the trouble with the team more visible, it has also prompted new conversations. And, these conversations appear to be happening beyond the activist community. As Noah Frank notes, “The Redhawks made you look, now you should listen.”

Read in the broader context of the struggle against Native American imagery in sport, the unveiling of the Redhawks is a clear continuation of past efforts and a significant new development. In keeping with past litigation around trademarks and ongoing protests, the recent brandalism is a clear renunciation, making clear the slur used by the team is an unacceptable name, an insulting term that injures indigenous people. In a real sense, renaming the team, if only figuratively, says quite clearly that is not my name, that is not me. The act of substitution, moreover, becomes an affirmation that rewrites racism and domination and also writes indigenous identity and autonomy into the present. At the same time, tt marks a shift from questions about the offensiveness of images of American Indians to the assertion over the ownership over Indianness and the media producing it. Indeed, laying claim to the means of meaning production and exerting control over stories and symbols, Go Redhawks! issues a demand to be recognized as fully human. Neither the actions nor the demands at the heart of this intervention may convince Snyder to change the name, but they do make it more difficult for fans, the media, the NFL, and the public to by the brand or root for racism or accept the hollow and misleading narratives prompting them up.