Rick Bailey is a retired English instructor who taught writing for thirty-eight years at Henry Ford Community College in Michigan. He is the author of American English, Italian Chocolate: Small Subjects of Great Importance (Nebraska, 2017) and the newest, The Enjoy Agenda: At Home and Abroad (Nebraska, 2019).

“I hate airports,” my wife says.

We’re checked in for an early flight, sitting in a Leo’s Coney Island at Detroit Metro. Leo’s is a joint that, along with diner breakfasts and a vaguely Greek lunch and dinner menu, is famous for its eponymous hotdogs slathered with chili and onions and, if you want it, mustard. You can even get one at 6:00 a.m. Good morning.

We’re on our way to California for a wedding and some wine tasting. Our flight is delayed (bad), so we get to have breakfast (good). Outside the big picture window, passenger jets taxi toward takeoff. On the restaurant sound system, above the din, I can make out The Jackson Five singing “I Want You Back.” There’s a tickle in the back of my throat, a cold coming on.

The people sitting around us must all hate airports, too, I think, though you wouldn’t know it by looking at them.

My wife looks at the menu, shakes her head. “What are you going to have?”

“Everyone is smiling,” I say.

She says she wants poached eggs.

There is a lot of gratuitous smiling going on this morning. At the next table a guy sitting by himself, wearing dad jeans, a khaki shirt, and giant gray sneakers and tube socks looks up from his omelet, takes a drink of orange juice, and smiles—at no one in particular. In the booth behind him the skinny kid having hotdogs and coffee for breakfast is smiling too. As our food arrives, a guy with a ZZ Top beard and his wife are seated at a table nearby. The guy is smiling. Mrs. Top is not.

I’m looking around the room, smiling at and about nothing in particular. I’m just smiling.

Some years ago, in an interview with Bill Moyer, the American poet Robert Bly said, “You can always tell an American in Europe. He’s smiling.” Well of course they are, you might say. They’re in Europe, not home. Most people want to be somewhere else. When they get there, if they’re lucky, they’re happy. 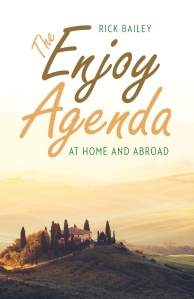 A recent Atlantic Monthly article reports that American businesses setting up shop in Europe have to calibrate their American smile setting to the local culture. An individual from Finland observes, “When a stranger on the street smiles at you, you assume he is a) drunk, b) insane, or c) American.” If Americans are among the smiling-est people, it might be a melting pot thing. Immigration, it turns out, is an important factor. The more diverse cultures that make up the population of a country, the more reliance on nonverbal communication. “When there are a lot of immigrants around,” the study cited in the Atlantic concluded, “you might have to smile more to build trust and cooperation, since you don’t all speak the same language.”

When I was a kid I rode in my father’s truck with him while he made deliveries. In town, out in country, every car we passed he smiled and waved.

“You wave at everyone,” I said one day.

“Sure,” he said. “It doesn’t cost you anything.” He was pretty much where he wanted to be, and he was smiling.

The host at the airport Leo’s greets every customer with a toothy smile. I seriously doubt he’s where he wants to be, but you can see his face, if not his heart, is in his work.

In the evolutionary process, the snarl becomes a smile. Yes, science tells us that the human smile, and our response to it, must have creatural origins. “Strange as it may seem,” says Janice Porteous, philosophy professor at Vancouver Island University, “the friendly human smile probably evolved from that much more aggressive display of fangs.” Animals, especially those of the predatory variety, greet each other with bared teeth. So do Americans. Across cultures people naturally learn to decode subtle facial presentations: the nervous smile, the fake smile; the shy, demure, forced, turn-away, drop-jaw, lop-sided, tight-lipped, toothy, pleased-to-meecha smile. The sneer and the smirk. The genuine smile. A person can have smiling eyes. One can smile and smile, Hamlet muses, and be a villain.

A quick scan of painted portraits reveals the cultural, visceral attitude about smiling—not cool. Angus Trumble, the director of the National Portrait Gallery in Canberra, Australia, observes that in portraiture, smiles were associated with “madness, lewdness, loudness, drunkenness, all sorts of states of being that were not particularly decorous.”

When our server sets down our eggs, I nod and smile. We eat, board our flight, and fly west into daybreak.

Off and on over the next few days, I catch myself smiling for no particular reason. It’s just gratuitous, nondescript idiotic smiling. Then there’s the wedding and two days of the wine-tasting, during which I feel worse and worse as my cold comes on. I blow my nose, I cough a lot, I eventually lose my voice completely. How are you? I smile. What’s new? I smile. How did you like the wine? Smile plus thumbs up (doubly idiotic). Any plans for the immediate future? Oh, not much. Just a lot of smiling.

Sometimes that’s all we’ve got.

4 thoughts on “From the Desk of Rick Bailey: This American Smile”