Mark Spitzer loves fish and he loves to fish. As a nationally known author (Seasons of the Gar, Return of the Gar), writing about fish and their issues is what he does best. In this blog series, Spitzer shares his experiences traveling the American West while researching a select number of freshwater fish that are often considered monstrous or freaky or hideously grotesque. Don’t miss the full version of this incredible tale, which can be found in Beautifully Grotesque Fish of the American West (heading downstream in 2017). 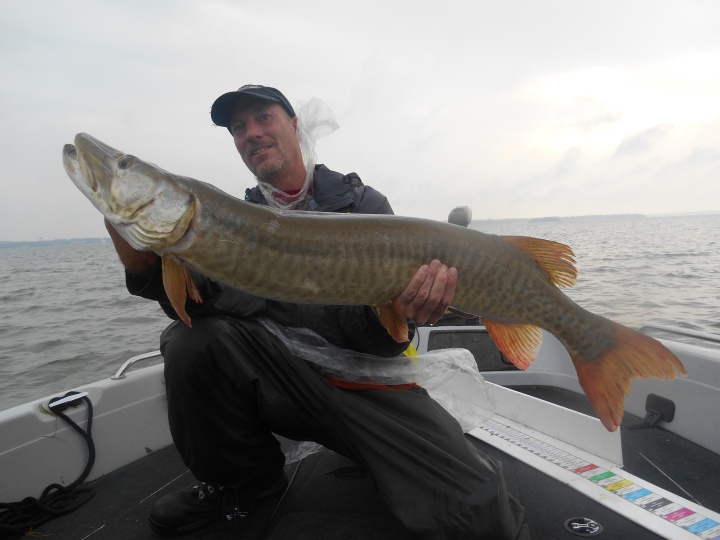 I caught this forty four-inch, thirty-pound grotesque in Iowa. Without question, pursuing the mythical muskellunge was the most difficult fish investigation I’ve ever conducted in my life.

The odyssey started on Leech Lake in Minnesota, where I fished for two days with two different guides. Casting supersized lures that exhausted the back and arms all day was a challenge in itself, but even more frustrating was watching those gigantic members of the pike family follow the lures in, then turn and swim away. Still, I got pretty good at the figure-eight technique, in which you swirl your lure around before bringing it into the boat, just in case a lunker decides to go for it at the last second.

Later that summer I fished with two more guides―one on a lake in the metro area, and one on the upper St. Croix. As was the case with Leech Lake, I received a maddening amount of follows, but no strikes to seal the deal. And on top of fishing with guides, I also bought a lot of equipment and went out on my own, to the point that I began to commiserate with anglers who target muskie all their lives and never connect.

Eventually, after about five thousand casts, I connected with “the fish of 10,000 casts,” as they’re infamously known in fishing lore. Or, I should say, after spending thousands of dollars on guides and gear and an entire summer driving and flying only to get skunked, I caught two in just ten minutes.

More importantly, though, I got a sense for this fishery, which has been exploding throughout the more northern states. Muskellunge management is now contributing to a booming tourist industry, and there are lessons we can take from the success of these fisheries to apply to others. Still, there’s no other phenomenon in western waters that can ignite every single molecule in an angler like the strike of a monster muskellunge.