Mark Spitzer loves fish and he loves to fish. As a nationally known author (Seasons of the Gar, Return of the Gar), writing about fish and their issues is what he does best. In this blog series, Spitzer shares his experiences traveling the American West while researching a select number of freshwater fish that are often considered monstrous or freaky or hideously grotesque. Don’t miss the full version of this incredible tale, which can be found in Beautifully Grotesque Fish of the American West, now available! 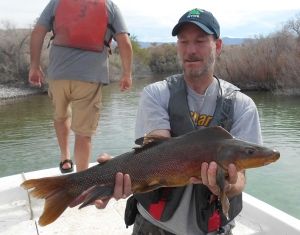 There’s this quasi-Quasimodo swimming around in what’s left of the Colorado River Basin. The critically endangered razorback sucker, also known as the humpback sucker, has a prominent hunchback which works as a keel to help them stay stabilized in the current. The thing is, though, there isn’t much of a current left in the systems where these big-lipped bottom feeders scour the detritus, because of all the dams that have led to reservoirs in lakes Mead, Mohave, Havasu, and Powell where fishermen favor transplanted smallmouth. In fact, there’s a war going on between conservationists and the tourism industry. That is, biologists are fighting to “repatriate” these extirpated grotesques, and chambers of commerce couldn’t care less.

That’s why I blasted out to the Arizona/Nevada border to investigate the Razorback Roundup. Every year, the US Fish & Wildlife Service, the Bureau of Reclamation, the US Geological Survey, the National Park Service, the state wildlife departments of Nevada and Arizona, and a number of universities and private fishery labs join up to sample as many of humpback fries as possible. Basically, this armada collects around 20,000 larval razorbacks then transports them to hatcheries where they compete with more desired fish for funds to grow large enough to get released.

But other things go on as well: like the mass-netting of adults for data, and maintaining man-made holding ponds for propagation purposes. It’s a slow-going process riddled by foul waterfowl raiding the juvenile stock and rogue rattlesnakes writhing through the wastelands where loyalists converge to commune about what can be done.

The big question then is why?—which is actually a political question. Why try to save these dopey-looking relics from a gone era? What does that give us? That’s what I set out to find out, and ultimately, the answer I discovered is as profound as that space between the vast networks of our own DNA and the faith that the sacrifices we make in the name of Bass will save us from ourselves. 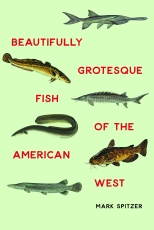 What the heck do I mean by that? Well, all I can say is that the Truth is written. Where? In Chapter 10 of Beautifully Grotesque Fish of the American West—so check it out for yourself.