Book Birthdays celebrate one year of a book’s life in tweets, reviews, NetGalley ratings, and more! This month we’re saying Happy First Book Birthday to The Baron and the Bear: Rupp’s Runts, Haskin’s Miners, and the Season that Changed Basketball Forever (Nebraska, 2016) by David Kingsley Snell. David Snell was a correspondent for ABC News covering everything from the Vietnam War to presidential campaigns to Apollo lunar missions. He is the author of Mike Fright: How to Succeed in Media Interviews When Mike Wallace Comes Calling.

In the 1966 NCAA basketball championship game, an all-white University of Kentucky team was beaten by a team from Texas Western College (now UTEP) that fielded only black players. The game, played in the middle of the racially turbulent 1960s—part David and Goliath in short pants, part emancipation proclamation of college basketball—helped destroy stereotypes about black athletes.

Filled with revealing anecdotes, The Baron and the Bear is the story of two intensely passionate coaches and the teams they led through the ups and downs of a college basketball season. In the twilight of his legendary career, Kentucky’s Adolph Rupp (“The Baron of the Bluegrass”) was seeking his fifth NCAA championship. Texas Western’s Don Haskins (“The Bear” to his players) had been coaching at a small West Texas high school just five years before the championship.

After this history-making game, conventional wisdom that black players lacked the discipline to win without a white player to lead began to dissolve. Northern schools began to abandon unwritten quotas limiting the number of blacks on the court at one time. Southern schools, where athletics had always been a whites-only activity, began a gradual move toward integration.

David Kingsley Snell brings the season to life, offering fresh insights on the teams, the coaches, and the impact of the game on race relations in America.

“The virtue of Snell’s book is that he takes an old story and tells the tale in a novel way, providing much-needed insight into not only the historic final game but also the building of two very different basketball teams.” —Tony Calandrillo, Sport in American History

“a feast for basketball geeks. It’s a must-read for college hoops fans who obsess over X’s and O’s, those who’ll be fascinated by Snell’s account of the contrasting styles of the two teams (Kentucky’s high-octane approach vs. the deliberate, pass-first offense of Texas Western) and the defensive schemes they employed.” —Mike Moore, The Crooked Scoreboard

“a nice read about the two squads who just wanted to play and win during a time filled with racial turbulence… an important book about an important game in sports history, in El Paso history and in Kentucky history.” —Felix F. Chavez, El Paso Times 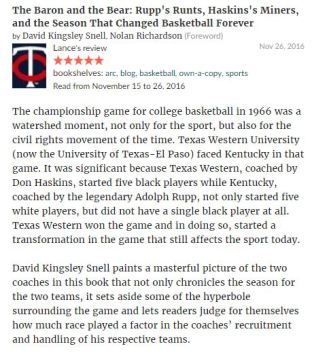 Good book. Reading The Baron and The Bear, about '66 season. Good one, too. https://t.co/BYJ1zC0hGO