Kyle Bladow is an assistant professor of Native American studies at Northland College. Jennifer Ladino is an associate professor of English at the University of Idaho. Their edited collection, Affective Ecocriticism: Emotion, Embodiment, Environment, is now available.

After the frightening ICC report came out on October 8, 2018, announcing the urgent need to cut carbon emissions as much and as fast as possible, Rebecca Solnit responded with a helpful, and hopeful, reminder. In an article for The Guardian, she writes, “Taking action is the best way to live in conditions of crisis and violation, for your spirit and your conscience as well as for society. It’s entirely compatible with grief and horror; you can work to elect climate heroes while being sad.” Hope, she suggests, counter-intuitively, isn’t necessary for action. Despair, “which is a form of certainty,” can be comforting in the way apocalyptic rhetoric sometimes is: at least we know what we’re in for. Unfortunately, end-times despair, like its cousin fear, is also paralyzing—not the best ally for political action. 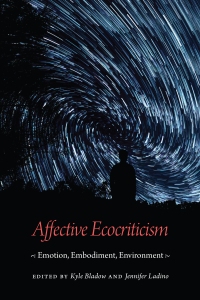 Confronting climate change is as much a psychological and emotional task as it is a scientific, economic, and political one. Our book, Affective Ecocriticism: Emotion, Embodiment, Environment, moves beyond the entrenched hope-despair binary to generate a more nuanced, precise, and pragmatic vocabulary of emotions that can guide difficult environmental conversations, both in and out of classrooms. Scholars and teachers have unique insights into how affects condition learning, thinking, and action. We engage emotions in our classrooms every day. Our scholarship on the affective dimensions of narratives, films, and other kinds of texts can help us apprehend emotions like empathy, anxiety, resilience, and desire, or investigate “new” feelings, such as solastalgia and climate grief, that are triggered by changing environments. Research on affect reveals the simultaneous presence of multiple, often conflicting emotions that emerge in response to cultural texts, climate reports, and everyday life.

Affective Ecocriticism features multiple approaches to affect studies, broadly understood as comprising two dominant vectors: neurobiological approaches (e.g., the work of Silvan Tompkins) and cultural studies (e.g., the work of Brian Massumi). Though the collection favors more recent texts, several chapters look further into the past, incorporating earlier conceptions of emotion articulated by Descartes, Darwin, Wordsworth, and Freud. Contributors investigate a number of environmental affects and introduce new ones, including “land affect” (Arnold), “queer environmental affect” (Seymour), and “food affect” as “embodied ideology” (Hertweck). The collection takes up an eclectic range of subjects, from short story and poetry collections to curricular programs and resource extraction projects, promising to be of interest to scholars of ecocriticism, cognitive science, cultural theory, and narrative theory, as well as to anyone concerned about our urgent environmental crisis.