David Naze is the dean of academic excellence and support at Joliet Junior College. His book Reclaiming 42: Public Memory and the Reframing of Jackie Robinson’s Radical Legacy is available now.

What Would Jackie Robinson Think?

In April 2019, Chicago White Sox player Tim Anderson came under heavy scrutiny for celebrating homeruns with a “bat flip” that has come to represent the most current mantra in today’s baseball era: let the kids play. Anderson’s celebration choice is not the lone instance by which today’s generation of professional athlete is judged, but it is a lightning rod for a discussion about whether “old school” versus “new school” is the preferred choice of sports fan. Taken a step further, many athletes are also told to “shut up and play” amid criticism for being too political on and off the playing field. Regardless of where one stands on these issues, too often such topics bring about a question that can never be answered: In today’s sports world where sports, politics, and race intersect, What would Jackie Robinson think?

Jackie Robinson died in 1972 at the young age of 53. While he is still remembered for his lasting social impact 47 years after his death, his legacy has arguably never been more relevant than it is today. Several national events have, predictably, been compared to Robinson’s breaking of baseball’s color barrier because of the groundbreaking implications that have come along with them: 1) the election of President Barack Obama in 2008, 2) the release of the major motion picture 42 in 2013, 3) the first openly gay NBA player, Jason Collins, coming out in a 2013 Sports Illustrated cover story, 4) the drafting of college football’s first openly gay player, Michael Sam, into the NFL in 2014, 5) the controversy surrounding former San Francisco 49ers Colin Kaepernick’s refusal to stand for the national anthem before NFL games during the 2016 season, and 6) the release of Ken Burns’ 2016 documentary, Jackie Robinson. 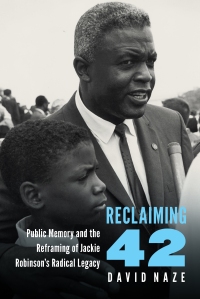 Each of these events, when they transpired, were almost immediately placed into a Jackie Robinson context. Countless media pundits, analysts, and journalists asked questions related to what Robinson would say about each of them if he was alive today. And while that demonstrates the fact that Jackie Robinson’s legacy is still at the cultural forefront on such topics, it is unfair to Robinson and his legacy to constantly assume what he would say about the Kaepernicks of the world and whether or not black athletes are too political or not political enough. It’s unfair for a number of reasons, mainly because it freezes his political and social thought processes in time and assumes he would not have adjusted his views over time. Perhaps he wouldn’t have, but where he stood politically in 1947 versus where he stood in 1972 are very different spaces. Social, political, and cultural contexts and circumstances have changed significantly over the past half-century.

So what would Jackie Robinson think? We might have a decent idea, but no one can say with certainty. We owe it to Jackie Robinson to make no assumptions about what he would or would not say about any particular issue in 2019. If anything, we owe it to Jackie Robinson to celebrate his many contributions beyond the baseball diamond that had an impact on the political and cultural landscape in America during the late 1950s, 60s, and early 70s, something we typically don’t do adequately, if at all. We owe him that much.