Winner of the Prairie Schooner Book Prize in Poetry, American Radiance, at turns funny, tragic, and haunting, reflects on the author’s experience immigrating as a child to the United States from Ukraine in 1991.

What does it mean to be an American? Luisa Muradyan doesn’t try to provide an answer. Instead, the poems in American Radiance look for a home in history, folklore, misery, laughter, language, and Prince’s outstretched hand. Colliding with the grand figures of late ’80s and early ’90s pop culture, Muradyan’s imagination pushes the reader forward, confronting the painful loss of identity that assimilation brings.

“Through generous associative leaps, Muradyan turns a narrative of assimilation into a debut collection that is as playful as it is wrenching…Though Muradyan’s poems are not formally daring, they feature imaginative enjambments and a whip-smart emotional logic. Occasionally, even the sobs and whispers of family members bubble up onto the page. Muradyan reveals herself to be a savvy and thoroughly modern poet, observing her subjects with a dispassionate, often droll eye.”—Publishers Weekly

“Muradyan is an enormously talented poet. American Radiance has the raw awkwardness of a first poetry collection, but her writing shimmers with strength and certainty. Her next collection will be better, but wise readers will buy this book and keep it, to love and to show, in the future, that they recognized it at the time as a sign of even greater things to come.”—New York Journal of Books

“Winner of the 2017 Prairie Schooner Book Prize in Poetry, Luisa Muradyan’s American Radiance reflects the complexities of the immigrant experience, and, through humor, pop culture allusions, and lyrical playfulness, highlights the exodus from one’s homeland and what it means to assimilate in America. Muradyan’s poems are not only concise, but funny, drawing on a plethora of figures that guide us through moments that are nostalgic, bittersweet, and at times utterly heartbreaking.”—Pank Magazine

“Readers search her work for clues as to what it means, how it feels, to be an American and she refuses to play along. Readers should write their own poetry to figure this American thing out.”—Foreword Reviews 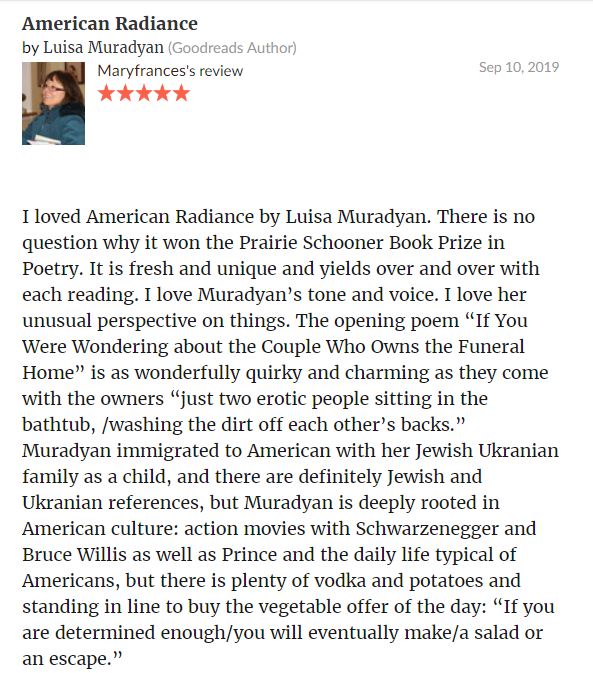 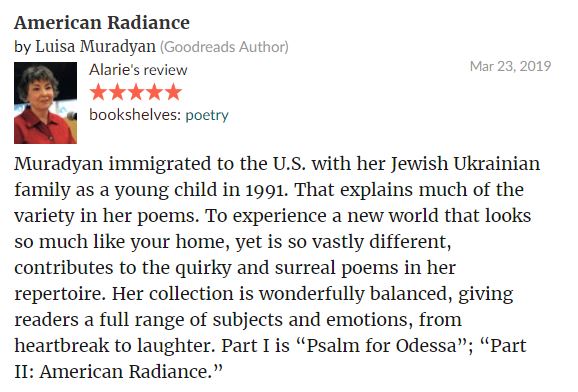 There are few things more rewarding than knowing people are reading something you've spent years creating. Thanks to everyone who has purchased a copy of American Radiance so far, you can order my book from @UnivNebPress https://t.co/hGgH2AKE4x

Today is the 1 year anniversary of the official pub date for American Radiance! Thanks 2 the amazing people at @TheSchooner and @UnivNebPress for giving me the opportunity to achieve one of my greatest dreams and 2 everyone who has supported me and the book ❤️🎉 pic.twitter.com/88Z0VsubBk

‘Our church
is surrounded by dolphins who know
nothing of our tragedy, and through this
they bring their priestly comfort.’

I love how @LuisaMuradyan describes finding/accepting her poetic voice, which led to her writing AMERICAN RADIANCE: “A potato powered lightbulb had gone off in my brain.” https://t.co/E9pgP6rCcA

“For many contemporary Jewish poets, the Holocaust is a historical event that is still deeply connected to our present moment.” In the latest in of our micro-essay series⁩, @LuisaMuradyan⁩ reflects on making her debut collection, American Radiance. https://t.co/p5KzEglX4h

Folks, if you have not read @LuisaMuradyan’s AMERICAN RADIANCE, please do yourself a favor and pick up a copy.

In this Micro-Essay on First Books, Muradyan dives into the genesis behind her debut collection. Read her essay and book. Both are amazing!https://t.co/FcJ1rLeflq

You snooze, you lose! We hosted a great event with @LuisaMuradyan and Georgia Pearle to celebrate her collection of poetry #AmericanRadiance 😊 we can’t turn back time, but we have signed copies at the store! Check out an interview with Luisa: https://t.co/cVL0uhq9fF pic.twitter.com/B8Q7oJinBP