Golfing legend Arnold Palmer died yesterday afternoon in Pittsburgh, his longtime spokesman and friend Doc Giffin told ESPN. Palmer was 87. The following is an excerpt from Arnie, Seve, and a Fleck of Golf History: Heroes, Underdogs, Courses, and Championships (Nebraska, 2014) by Bill Fields. 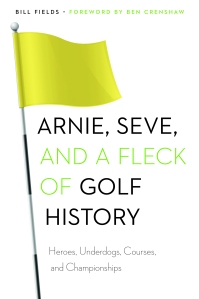 Arnie, Now and Then

Golf was ready for Arnold Palmer in 1958, and he was ready for it. Like the larger world, which got fast food and faster travel in the 1950s, the pro game was in transition. A generation of players who had carried it since before the start of World War II, including titans such as Ben Hogan and Sam Snead, were getting older. Other golfers were trying to nudge their way toward center stage, but most of them were businesslike performers in a business that didn’t pay very well.

“The best I ever finished on the money list was fourth in 1956 when I won a little less than $25,000,” says eighty-five-year-old Fred Hawkins. “We were all just trying to scratch out a living; we all could have made more money doing something else. The purses weren’t worth anything, and they only paid about twenty places. Many weeks I made more gambling in the practice rounds than I did in the tournament. We all had to be kind of crazy to play, but we all loved the game.”

By and large, though, Hawkins and his peers kept their feelings close to their cardigans. “Most of the good players back then were more stoic,” says Don January, who joined the tour in 1956. “They tried to hide their emotions. Arnold threw his out there for everybody to see. He’d hitch up his pants with his elbows. He’d hit and have that finish with everything twirling, and his nose would be snorting like a bull in heat.”

Palmer’s gusto was combined with a simple grace that connected him with fans eager to latch onto a hero—it was the social equivalent of his golf mantra to hit the ball hard, find it, and hit it again. “He likes people and conveyed that to them, and they naturally liked him,” says longtime friend Dow Finsterwald. “It’s easy to like somebody when they like you. It was just his way, his natural way. What you saw was what you got, and it was pretty damn good.”

Had the substance of Palmer’s game not matched his appealing style, he would have remained a curiosity instead of becoming a champion. “Hard as nails,” January says of Palmer’s competitive grit. “He was always a player with a great set of nerves. He’d get in that funny, knock-kneed stance putting on a green that was half grass and half dirt and run a thirty-footer six feet by and just climb on the other side and pour it back in there. Boy, that takes some talent.”

Finsterwald has known Palmer, and about his talent, since 1948, when his college team went to North Carolina and had a match against Palmer’s Wake Forest team. “He shot 29 the first nine against me,” Finsterwald says. “Yeah, I knew early on. Others on tour had their reservations, a wait-and-see attitude. The old guard was still around. They said, ‘Let’s see.’ And they saw.”

After winning the U.S. Amateur in 1954, Palmer joined the tour the following year. He won the Canadian Open in 1955, followed by six victories during the next two seasons—including titles such as Insurance City, Azalea, and Rubber City that sound quaint in today’s corporation-heavy culture.

But the tournament with the simplest name of all, the Masters, had Palmer’s keen attention. He tied for tenth place in his initial visit, was twenty-first in 1956, and tied for seventh in 1957. Augusta National enthralled him from the first time he saw it. “Everything was just nice,” he says. “I had heard so many things about Cliff Roberts and how tough he was. The way the course was manicured, the setting overall. I played all winter in some pretty rough conditions and spent the whole time looking forward to getting to Augusta. Everything about Augusta turned me on.”