Douglas Branson is the author of Greatness in the Shadows: Larry Doby and Integration of the American League (Nebraska 2016).  He is the W. Edward Sell Chair in Business Law at the University of Pittsburgh.

I am a Cleveland Indians fan. I grew up rooting for the Indians, living as I did on a farm in Northern Ohio. But I also went to Northwestern University School of Law and lived in Chicago for seven years. So I have also been a Cubs fan. Being both a Cubs fan and an Indians fan, in this Series I was perfectly hedged. I rooted for both teams. My suspicion is that a great deal of other baseball fans felt the same way.

Alternatively, wearing my Indians hat, I was not too chagrined that Chicago won the Series. If Cleveland had to lose to someone, my top choice for that someone would be the Cubs (“Cubbies” to Chicagoans).

Baseball aficionados call major league teams on the East and West coast “pretty boy teams.” That is especially true of the Yankees and the Dodgers, with the two highest player payrolls in baseball, but applies to the Giants and the Red Sox as well. The pretty boy teams hog the limelight. Sixty percent of the time, when I tune in to the ESPN Baseball Game of the Week, the game is Yankees versus Red Sox, or Red Sox versus Yankees, or so it seems.

What gave this Series poignancy, aside from the 108 year dry spell the Cubs had endured, and the sixty-eight years or so dry spell the Indians and their fans had put up with, was that this was a World Series for two teams representing the so-called “fly over states,” the states between the coasts that, except in an election year, largely are forgotten. It was Midwest event, I am a Midwestern boy, and I very much enjoyed that aspect of the Cubs-Indians Series. 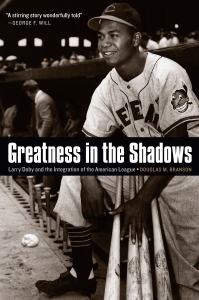 Another fact that gave the Series poignancy is the legacy each has in the integration of baseball. Both organizations integrated their squads with a number fourteen. Larry Doby wore fourteen for the Indians beginning in 1947 (eleven weeks after Jackie Robinson broke the color barrier with the Dodgers in the National League). Ernie Banks wore fourteen for the Cubs beginning late in the 1953 season and for nineteen ensuing seasons.

Doby was seven-time All Star, twice an American League home run king, once the RBI leader, and a crackerjack centerfielder. Banks (“Let’s play two today”) was an eleven time All Star, hit 512 home runs lifetime, and was a first rate shortstop. Banks was and remains “Mr. Cub” to generations of Chicagoans. Both gentlemen, Doby and Banks, are enshrined in the Baseball Hall of Fame in Cooperstown, New York.

But their baseball track records don’t even begin to do justice to Doby and to Banks. Doby was a World War II veteran, newly home from Navy service in the Pacific, when he began his career with the Newark Eagles and then the Cleveland Indians. Banks, also a veteran, was an ebullient person, always smiling and upbeat. The Cubs bought him from the storied Kansas City Monarchs of the National Negro League. In the 1990s, Chicagoans voted Banks the athlete of the century.

After his playing days, Doby went on to become the second African American manager in baseball (Chicago White Sox, 1978) and was a long time hitting coach for the Montreal Expos. He and his wife Helyn parented five children. Of Doby, Yogi Berra, Doby’s longtime friend and neighbor in Montclair, New Jersey, said, “All he represented, on the field and off, was goodness and hope.”

Banks went on to a long life as a public figure in Chicago, on the Board of the Chicago Transit Authority and co-owner of a Ford dealership.

Doby died in 2003. Banks died in 2015. Both gentlemen are represented by larger than life bronze statutes outside of the ballparks where they played and where their teams played the 2016 World Series: Progressive Field in Cleveland and Wrigley Field in Chicago. Both Banks and Doby are probably smiling down at those parks, hosts to one of the best World Series ever played.