The following contribution is from Dennis Snelling, author of the forthcoming book Lefty O’Doul: Baseball’s Forgotten Ambassador (May 2017). Snelling has been a senior writer for Helmar Baseball History and Art magazine and a member of the Society for American Baseball Research and the Pacific Coast League Historical Society. He is the author of The Greatest Minor League: A History of the Pacific Coast League, 1903–1957 and Johnny Evers: A Baseball Life.

Word came the other day that a San Francisco landmark is closing—Lefty O’Doul’s Restaurant & Cocktail Lounge. Founded by baseball great Lefty O’Doul in 1958, it had survived for nearly six decades as one of the first sports bars on the West Coast. Now, a dispute between landlord and tenant is threatening its existence. There is a great uproar going on right now, with dueling press conferences, walls being stripped bare, and the possibility of competing restaurants within a block of each other—each side claiming ownership of the name and contents of the business.

Certainly, having a biography of O’Doul coming out in the next few weeks, I am sad to see the battle going on, although it seems more likely than not that the place will return in some form or another. In any case, my book will not be able to cover the outcome of the battle, which does bother me. It also provides an example of the often serendipitous nature of research and timing when having a book published.

Lefty O’Doul spent his entire life in the limelight which, of course, for a biographer is golden. In my opinion, with the globalization of the game making him more relevant today than he seemed at the time of his death, he is easily the most important baseball figure lacking a biography. But that did not make the task easy. O’Doul was a complicated figure in many ways, with multiple important—and parallel—storylines arcing through his life. Structuring his story was additionally challenging because of his lack of success until he reached his thirties—you can’t have a reader on chapter four wondering, “Why in the heck anyone would write about this guy?” Especially when the premise involves O’Doul’s overlooked importance to baseball.

I eventually came to the conclusion that Lefty’s most lasting contribution to baseball was the 1949 tour of Japan he undertook at the request of Douglas MacArthur. Following Babe Ruth’s death in August, 1948, Lefty was the most popular American sports figure in Japan, thanks to his many visits dating back to 1931. With the Japanese beginning to flirt with Communism, Lefty was recruited to help repair U.S.-Japan relations. General MacArthur labeled the resulting tour the greatest piece of diplomacy in the history of the United States. That helped me overcome the obstacle of Lefty’s early lack of success—I decided to use the 1949 tour as the backbone of the book, providing flashbacks from the tour to open each chapter.

I had everything set, with a structure I felt worked. I obtained a few Japanese articles referencing the tour, some from English-language Japanese newspapers both here and in Japan. Researchers aware of my project, especially Yoichi Nagata, Robert Fitts, and David Eskenazi, assisted by sending some materials as well. As helpful as these articles and photos were, the Japanese perspective of the 1949 tour was not as comprehensive as I would have liked. I felt a greater understanding of the Japanese reaction would cement O’Doul’s reputation.

Then fate stepped in. The weekend before the manuscript was due, I received a gift from a friend, Alan O’Connor, in the form of three hundred pages of Japanese newspaper articles about the 1949 tour, commissioned by the owner of the San Francisco Seals and translated into English. No one had seen these in decades—they had been obtained from the estate of a former owner of the Sacramento PCL franchise who had recently passed away at the age of 100. These were the original hand-typed translations and newspaper clippings, invaluable in understanding the Japanese point of view of the tour, and in confirming O’Doul’s influence and importance to the Japanese. I was able to rewrite the flashback sequences, which helped me, and the reader, better understand Lefty’s impact. If these had shown up a few weeks later—documents no one knew existed—it would have been too late.

Another interesting example of chance also came near the end of the writing process when I ran across an obscure article in a West Virginia newspaper shortly after O’Doul’s death. I don’t even know how I came across the article—I was searching online for something or other about Lefty. In the article, a minor league general manager reminisced about being a bat boy with the Philadelphia Phillies in 1930 and related that Lefty would instruct him and the other bat boy in the proper manner of greeting him at home plate after a home run. The boys were to stand on each side of the plate and he would reach out and shake hands with them as he completed his tour of the bases. O’Doul thought it would make a great photograph. It was a great story that certainly reflected Lefty’s personality and I quickly added it to the narrative.

During my final fact check, I was reviewing an article I had collected a couple of years earlier that involved a key home run Lefty had hit while with the Phillies, one that helped knock the Chicago Cubs out of the 1930 pennant race. Lo and behold, there was a photograph of Lefty being greeted by the two batboys, just as had been described. Now I could take the story of the bat boys and tie it to a key event in Lefty’s career. Without knowing the story behind it, the photograph had previously seemed a routine shot of a player crossing home plate. But now I had the context, and a more compelling story.

Lefty O’Doul is still revered among San Franciscans, and being connected to the right person by accident proved fortuitous. At one point, I called up the courthouse in San Francisco in order to locate Lefty’s will and any other legal documents that might exist. After being transferred around to several departments, I was finally connected to the office that could fulfill my request. The woman who answered the phone was very professional and courteous, but was not sure whether she could be of much help. After asking a few perfunctory questions about process, she asked me the name of the person whose documents I was seeking. When I answered that it was in regard to Lefty O’Doul, the whole tone of the conversation changed. “Lefty O’Doul! Listen, I’m going on vacation next week, but if you will get this request to me fast, I will get it done before I leave.” And she did. 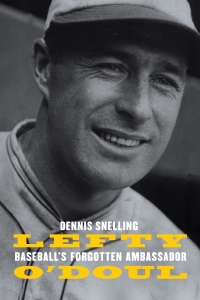 There are inevitable ups and downs involved in researching nonfiction. That was certainly true in my case during the three and a half years I spent on Lefty’s O’Doul’s biography. There are dead-ends. And there are also further developments. Since Lefty O’Doul’s death in 1969, his story has continued. Someone writing about him at that time would have lacked the perspective gained by witnessing the impact Japanese professionals have had on the major leagues over the past two decades. They would have missed his induction into the Bay Area Sports Hall of Fame in 1983, and the Japanese Baseball Hall of Fame in 2002, and Baseball Reliquary’s Shrine of the Eternals in 2013, and the multiple campaigns undertaken on his behalf to earn him a place in Cooperstown. He has had a bridge named after him, and both a gate and a plaza at the San Francisco Giants stadium, which opened in 2000, is named in his honor. There was even a ballot measure drafted to have Candlestick Park named after him—the measure went down to defeat in large part because everyone knew how much Lefty hated the ballpark.

And now, the battle over his iconic restaurant and piano bar.

Some stories never end. But if you get lucky, you have the opportunity to tell a story in a way that endures. No one ever really finishes a nonfiction project. One only reaches a deadline. I always strive for the definitive in my projects but I also recognize the elusiveness of that goal. Quality and thoroughness of research is paramount in a biography—but luck plays a role as well. There is always more to learn when writing nonfiction. That is both fascinating and frustrating. But discovering new facts and perspectives, and getting the story right—often combined with luck—is incredibly rewarding.F

One thought on “From the Desk of Dennis Snelling: Some Stories Never End”