The Jewish Publication Society, along with Creighton University College of Arts and Sciences and NMAJH, is sponsoring an event tomorrow (April 30) at the National Museum of American Jewish History. Together with scholars and representatives of major rabbinical seminaries, this day long event will discuss the current trends and the future expectations translating the Jewish Bible. Full event details can be found on NMAJH’s website.

This special symposium was put together in celebration of the 100th anniversary of The Holy Scriptures, which has been praised by Time as “A landmark of Jewish religious scholarship.”

Introduction speakers at the event include Rabbi Barry L. Schwartz, director of JPS and author of Judaism’s Great Debates (JPS, 2015) and Leonard Greenspoon of Creighton University.

Moderating “Toward the Future—Notes for a New Translation” will be Michael Carasik, author of The Bible’s Many Voices (JPS, 2014) and the compiler and translator of the Rubin JPS Miqra’ot Gedolot Commentators’ Bible series. 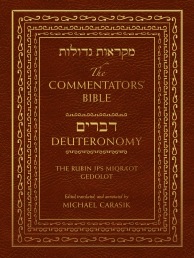 Since 1888 the mission of JPS has been to enhance Jewish literacy and self-understanding with the JPS TANAKH, the most widely read English translation of the Hebrew Bible, Bible commentaries, and hundreds of classic books about Jewish history and thought. As the oldest not-for-profit and non-denominational Jewish publisher in the U.S., JPS publishes works representing the highest levels of scholarship, written in a popular manner. Indeed, “accessible scholarship” remains JPS’s unique niche. The authors, donors, and readers of JPS represent the entire spectrum of the Jewish community.