The following contribution comes from Mark Hollabaugh, author of The Spirit and the Sky: Lakota Visions of the Cosmos (Nebraska, 2017). His book examines the attention the nineteenth-century Lakota gave to the celestial realm and the inherent mystery of the cosmos.

I couldn’t miss the August 21 total solar eclipse. I have seen several partial solar eclipses and many partial and total lunar eclipses but never a total extinction of the Sun’s light.  In 1979, while at St. Olaf College, I had made plans to travel with a group of students and faculty to Canada to see an eclipse. As fate would have it, I fell ill with a nasty cold and didn’t go. Of course, I felt much better the day of the eclipse and saw only the partial phase from Northfield. So, this time I couldn’t miss it.

I also couldn’t miss this one because it would give me, an ethnoastronomer, the opportunity to experience similar feelings to those of the Lakota who saw solar eclipses in the nineteenth century. Ethnoastronomy focuses on the role of astronomy in a culture and what would be better than seeing how people in our century react to an eclipse.

With all the possible locations from which to observe this celestial display, I chose Grand Island, Nebraska. The Platte Valley Astronomical Observers hosted viewing at a site just west of the city. There was a high probability of favorable weather. But, when I awoke that Monday morning at my hotel in Lincoln, there were clouds and fog, the nemesis of the astronomer. Nonetheless, hope for the best, I thought. 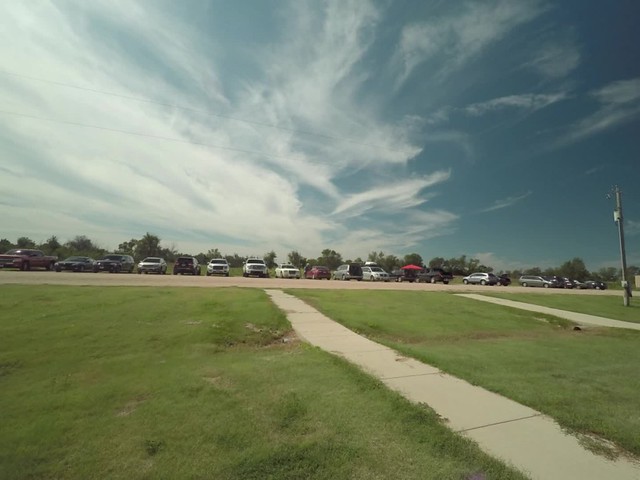 The further west I drove from Lincoln, the skies became better. Traffic on I-80 was much lighter than the dire prediction of gridlock.  I would be only a stone’s throw from the centerline of the eclipse.  By the time I was set up at the site, there were only high cirrus clouds. To my left were two teachers and friend from Fargo who drove all night to get there. To my right was a Canadian gentleman making an extended tour of the West.  There were telescopes worth thousands of dollars and simple cardboard box pinhole viewers. Excitement grew as first contact approached.

Having seen several partial solar eclipses, I didn’t really get excited when the Moon began to cover the Sun. I fidgeted with my three cameras and an hour before totality started my GoPro camera to record a time lapse at second second intervals. Everyone had their eclipse viewing glasses on and checked the progress of the Moon every minute.  When the Sun was about eighty to ninety percent covered, there began to be a discernable transformation in the surroundings.

The biology teacher next to me noticed a change in the behavior of the insects. Bugs awake during the day seemed less active, others became more active. The look of the surroundings changed. The grass began to look gray. As a photographer, I’d describe the appearance as less saturated colors. The temperature began to drop. Later when I accessed the day’s weather data for Grand Island, the temperature graph showed a decrease beginning about an hour before totality and a return to normal about an hour after the Sun reappeared.

A group of kids began counting down, “Ten, nine, eight, seven, six, five, four, three, two, one.” And it was nearly totally dark. A thin band of light surrounded the Sun. Venus was clearly visible to the west of the Sun. Only a glow of light indicated the presence of the horizon. I alternated between looking through the camera viewfinder and peering directly at the Sun. Shadows reminded me of a dimly lit stage with a single light on the actor.  “Oh,” “Wow,” and other exclamations were the only words heard. Then it was over.

I had been told this would be the shortest two minutes and thirty-six seconds of my life.  It flashed by faster than anything I can remember. I wanted it to last longer, much longer. Although none of us there on that Monday were terrified the Sun was being devoured, we were in awe of the spectacle.

I was fortunate to obtain several photos thanks to careful planning and practice. With basic equipment, I saw solar prominences, captured the diamond ring effect, and made a time lapse video showing the Moon’s umbral shadow rolling over the Nebraska countryside.

Seeing a total solar eclipse changes one’s life and perspective. For one brief moment, millions of Americans shared a common experience. When the Lakota saw a total eclipse in August 1869 from the Whetstone Agency in South Dakota, they fired guns into the air to drive away the power that was extinguishing the Sun. It worked and the Sun returned. They understood this as their use of powerful medicine to return the Sun to normal. Could the 2017 eclipse be powerful medicine for our age?

A note on the photos:  The time lapse was made using a GoPro Hero 4 fitted with a polarizing filter to reduce glare and deepen the colors.  From the 800 images shot, this composite was made using the GoPro Studio software.  The totality stills were shot with a Canon EOS 70D with the 18-135 mm lens set to 135 mm focal length, f/8, varying shutter speeds between 1/125 s and 1/500 s using bracketing.