“Significant and timely. . . . Wise Words of the Yup’ik People and Yup’ik Words of Wisdom together honor the richness of oral tradition among Alaska Natives while addressing a broader audience of the next generation of Yup’ik people, scholars of various disciplines, and policymakers alike.”—Andrea D. Robertson, Pacific Northwest Quarterly

The following is an excerpt from Wise Words of the Yup’ik People: We Talk To You Because We Love You, New Edition by Ann Fienup-Riordan and translated from the Yup’ik by Alice Rearden.

Introduction to the New Edition 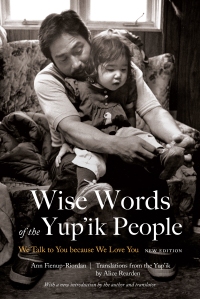 More than a decade has passed since Wise Words was first published, and we are glad to introduce this second printing. Somethings have changed in southwest Alaska in the last ten years. Many of the elders whom we worked with when printing Wise Words have passed away—Frank Andrew in 2006 and Paul John in 2015, to  name two who had a profound influence on the shape and content of this book. In 2014 the Calista Elders Council, the small nonprofit that carried out the research for the book, merged with Calista Heritage Foundation to form the “New CEC,” Calista Education and Culture, with the dual mission of education and cultural preservation in the Yukon-Kuskokwim delta region. The region itself has continued to grow—one of the few rural areas of Alaska to do so—and now has a population of roughlly twenty-six thousand.

The team that produced Wise Words–including Mark John, Marie Meade, and ourselves–still works together. Thanks to ongoing support from the National Science Foundation, the National Endowment for the Humanities, the Administration for Native Americans, and the Calista Corporation, we have continued to work with elders documenting and, in our turn, sharing Yup’ik oral traditions. We have been asked over the years what people mean when they use the term “elder.” Some say that people become elders as soon as they have children of their own whom they can advise. Others say that people age in different ways. Those who constantly give advice to their children and grandchildren are considered true elders; those who do not give advice are not elders but people who just get old. 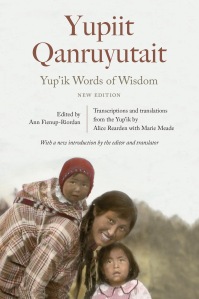 Wise Words and Yupiit Qanruyutait were among CEC’s first books, intended to communicate the qanruyutet (wise words or instructions) that guided human interaction in southwest Alaska in the not-so-distant past. Both books explore the relatively small number of memorable adages elders  used to communicate the basic tenets of Yup’ik moral instruction. In the past, elders used formal adages and metaphors to objectify complex and essential life lessons, and today they continue to share these smae adages to educate listeners of all walks of life, especially their young people.

Indeed, their words still carry weight. Of all the books CEC has produced, I believe theses two are among our most important contributions. Both books are now being used as the basis for a new Yuuyaraq (Yup’ik Way of Life) curriculum for 7th, 8th, and 9th grade students in schools throughout southwest Alaska. Our written texts have been supplemented with additional interviews and short video presentations in which Yup’ik residents continue to share qanruyutet that have shaped their lives and that many firmly believe still have value at the beginning of the twenty-first century.

Finally, in what they share, elders are not just trying to say but to do something. They know they possess a knowledge system second to none, and they want others to give it the respect it deserves. Before he passed away, regional leader Paul John discussed the effect of our documentation of Yup’ik qanruyutet. He said, “If white people see these books, they will think, ‘These Yup’ik people evidently know how to take care of their own affairs through their traditional ways.’ …Our young people will be able to independently practice their way of living.” If we really want to understand Yup’ik communities today, we need to understand not just what is being said but why people believe it to be so important to remember. Long-term collaborations like those hat prouced this book, combining our insights and observations, can help us move in this direction.