Joe Green is a retired high school English teacher from Minden, Nebraska. He annotated the new Bison Classic edition of A Cycle of the West by John G. Neihardt (August 2018).

The Capacity for Courage

When I retired from high school teaching, a student handed me this note: “Mr. Green, thank you for including John Neihardt’s Cycle of the West in senior English. When we read The Song of Three Friends [the first part of the Cycle], I wished I could have joined the Ashley-Henry men on their keelboat up the Missouri. Their journey taught them more about the land, the native people, and themselves than they could ever have imagined when they left St. Louis on that exciting April day! What adventures!”

This student’s euphoric response to Neihardt’s Cycle of the West pleases me, and I know that most of my other students felt the same way. Long after he graduated, Andrew Raun, now a professional journalist, also acknowledged the value of reading Neihardt’s Cycle: “Knowing Neihardt has made my life better these past ten years.” Kara Choquette, another Minden High graduate, echoed Raun:  “I really enjoyed it,” she wrote, “and I hope future students can come to know and love Neihardt as I did.”

Neihardt’s monumental epic poem sings the American West of the nineteenth century—from the 1822 Ashley-Henry expedition to the 1890 massacre at Wounded Knee. In a powerful iambic cadence, Neihardt tells five stirring stories: the first, of three young trappers whose friendship is destroyed by jealousy; the second, of Hugh Glass, left for dead by his companions and compelled to crawl for miles in search of revenge; the third, of the incomparable Jedediah Smith’s two overland journeys into the farthest regions of the West; the fourth, of the violent conflict between whites and Native Americans, culminating in the killing of the great Lakota warrior, Crazy Horse; and the fifth, of  the Messiah (Ghost Dance) Movement and the slaughter at Wounded Knee.

Thousands of readers already know Neihardt’s famous Black Elk Speaks, the story of the Oglala Lakota visionary who lived during the tumultuous years of the late nineteenth century. Not only does Black Elk share his remarkable vision of the unity of all life, but he presents a firsthand account of the clash between white and Native American cultures. A Cycle of the West, which Neihardt considered his best and most important work, also deserves a prominent place on readers’ bookshelves.

Admittedly, though, reading any epic poem is no easy task, and high school and college students, their teachers, and general readers may need help with some of Neihardt’s vocabulary and with his literary and historical references. The University of Nebraska Press is addressing this need by publishing a new annotated edition of Neihardt’s Cycle. This edition contains extensive, easy-to-use notes that make the poem accessible to all readers. 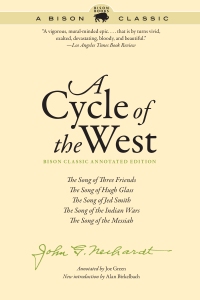 The epic world of Neihardt’s Cycle of the West speaks to the complexities of human experience in the West. The same themes found in Homer, Milton, and Spenser appear throughout Neihardt’s poem: betrayal and love, expectation and disappointment, ignorance and knowledge, sorrow and joy, failure and success, to name but a few. Moreover, Neihardt populates his landscape with heroes—Mike Fink, Hugh Glass, Crazy Horse, Roman Nose, Jed Smith and dozens of others who played important roles in western history—but, like the heroes in all serious literature, Neihardt’s heroes are imperfect. Fink’s moral blindness leads to his death; obsessed with revenge, Hugh Glass fails to discover forgiveness until it is almost too late; for all his many strengths, even Jed Smith has moments of self-doubt; the courageous Crazy Horse finds himself caught between his desire to fight and his need to help his people; and Sitanka’s dream of a perfect world cannot prevent the massacre of his people. In the course of facing their imperfections, nearly all of Neihardt’s heroes reveal the human capacity for courage and love—the two virtues Neihardt considered indispensable. More than anything, Neihardt’s heroes transport us out of ourselves—and into ourselves—all the while revealing to us the ambiguous and exciting nature of human existence.

In O Pioneers! Willa Cather writes that “the history of every country begins in the heart of a man or a woman.” Neihardt knew this to be true, also. His Cycle of the West compels readers young and old to look into the very heart of American history from the perspective of a mature poet who knows that the best of history takes place, to use Neihardt’s words, in “that wilderness / the human heart.”

As Neihardt’s close friend Stanley Smith once said, “For these and many other reasons, Neihardt’s Cycle belongs on every bookshelf. Belongs in thunder!”