Char Miller is the W. M. Keck Professor of Environmental Analysis at Pomona College and author of several books, including Not So Golden State: Sustainability vs. the California Dream.

Perceiving Past and Present

How do historians perceive the past?

For John Opie, the answer lies with what and how one sees. In his case, that entails looking for the imprint of the past on the land, as manifest in the tools humans have employed to manipulate landscapes, and in the structures—physical, legal, social, and political—that we have constructed to shape those places where we live, work, and play.

In a 2009 interview, John described how he watched his father, a mechanical engineer, think through an engineering problem; he “pictured” its resolution by sketching rather than through “verbal or even mathematical form.” John’s love of photography drew on the same impulse, and it helps explain why in the 1970s he was attracted to the emerging field of environmental history: “I’m convinced that most environmental sensitivity begins, at the very least, with a high level of visual acuity.”[1] 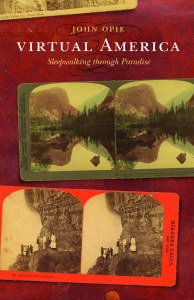 The intellectual conviction that historians would be well-served if they envisioned people in place over time frames John’s three major books that the University of Nebraska Press has published over his distinguished career. Law of the Land (1987) takes as its starting point the geometric grid that resulted from Thomas Jefferson’s late eighteenth century land-survey system; its survey-chain rigidity, John argues, limited the capacity of Americans farmers to innovate and prosper. By its very title, Virtual America: Sleepwalking Through Paradise (Nebraska, 2008) begins with our eyes and how they absorb the “range of virtual realities on the computer screen, the visual wonders of world’s fairs, and the physical implanting of one’s self in a home place.”[2]

As visually driven is Ogallala: Water for a Dry Land (Nebraska, 2018), the third edition of which has just been published.[3] Initially it may be hard to see the ineluctable connection between the ancient geological forces that over eons created the Ogallala Aquifer and its invisible groundwater, and the transformation of the Central Plains into one of the world’s most productive agricultural landscapes. The link comes into focus when John shows us how to look for the vertical in this flat terrain: windmills, pumps, and center-pivot irrigation infrastructure have turned a dry land wet.

Imagine my delight, then, when John called to ask if I might help update and revise Ogallala, and do so with Kenna Lang Archer of Angelo State. Who could turn down the chance to re-read this seminal text and reconceive it for a new generation of readers? Not us. Besides, John promised the work would be fun—and he was right.

Rather than simply focus on present-day struggles, this edition, like its predecessors, firmly establishes the historical context of current debates over and future prospects of the Ogallala Aquifer. Capturing the lay of the land, in every sense, had been the animating idea that had led John to write the first edition (1993) and to revise it seven years later. But what we did not initially appreciate was how engrossing and complicated it would be to reimagine this classic text. Yet as the three of us reworked the early chapters, trading them back and forth by the most contemporary of means—emailing from our computers in three different states: Ohio, California, and Texas—it became clear that the region’s dynamic past—including the physical geology of the aquifer itself and the evolving social geography of those long dependent on the Ogallala’s waters for their sustenance— still lay at the heart of the story.

“The modern history of the south-central High Plains,” we write, “is a series of crisis situations accelerated by repeated drought.” Late nineteenth century settler-colonists were the first to experience those emergencies. The first to recognize that these environmental exigencies came “with no solution and no end.” By their use of the plow, they ripped up native grasses whose deep roots had protected the Plains’ ecosystems and sped up “the pace of nature’s events and narrowed nature’s intentions to suit human needs.” What followed was an interlocking series of environmental and social disasters that would hit the region in the 1930s—the Dust Bowl. Its howling dust storms carried away the fertile soil and chased out much of the human population.

Our in-depth exploration of this haunting episode sets the stage for subsequent chapters probing what many presumed to be technological fixes to the Great Depression’s unsettling traumas. After World War II, more powerful drills and pumps tapped deep into the aquifer, releasing a seemingly limitless gush of white gold. Plentiful water fueled a series of innovations in farm machinery and irrigation operations, and ongoing experiments to determine the most profitable kind of crops to grow and herds to raise. These, when combined with water-conservation strategies and the emergence of massive, industrialized agricultural operations, were thought to have saved the day.

Certainly, they have had a profound impact on global food systems and on the lives and livelihoods of those who inhabit the Ogallala region. Salvation is another matter. However robust the technology and however compelling the human stories—each of which we track carefully—there are, and have always been, clear limits to the region’s irrigation dependency. 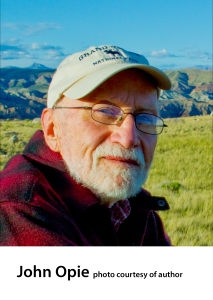 At the same time that “the clear, fresh waters of the Ogallala are being gulped down at ten times their trickling pace of replacement,” the world’s exploding population is increasingly hungry for the grains and meat produced on the Plains. This tension has led to a spike in the price of water and food, a disconcerting situation that could wreak havoc on the aquifer and intensify global food insecurity, while offering a daunting reminder that nature is the final arbiter.

That’s the message embedded in the lustrous cover for Ogallala’s third edition: a set of vivid green circles extend out to the horizon. Beneath the shimmering surface of that triumphant perspective lies a darker reality, a browner hue.

[3] In this same interview (p. 362) John scoffed at the notion that he’d ever bring out a third edition of Ogallala. When he said “never,” he meant now.

One thought on “From the Desk of Char Miller: Perceiving Past and Present”