The following is an excerpt from Of One Mind and Of One Government: The Rise and Fall of the Creek Nation in the Early Republic by Kevin Kokomoor.

At the beginning of the nineteenth century a political Creek people could be found spread through present-day Georgia, Alabama, and the Florida panhandle. You could even say there was a Creek Nation. The Creek Nation consisted of dozens of communities, big and small, bound together by a centralized political entity referred to widely as the National Council, or sometimes as the Executive Council. It was a governing body that both created and enforced regional laws. At one of its meetings, late in 1802, a half dozen or so members of the council came together to flex their coercive muscle, responding to the continued and threatening presence of Anglo-American adventurer William Augustus Bowles. At a meeting in Tallassee they debated and enacted laws they hoped would quash Bowles and break up his banditti, dissuade other similarly nefarious characters from repeating his mistakes, and project stability throughout the region. They would drive out disreputable white men, mischief-makers, and others “of a light character” and would also clamp down on illegal trading. Generally, they declared, those and “other articles” were designed for “keeping peace with all white people around them” and “for all Indian Nations to be at peace with each other and to be of one mind and of one government.” The contents of the meeting were sent down to Pallachockola and further into the Florida panhandle, a warning to the wayward communities at the edges of Creek Country that were threatening the stability of the region. The talks would be read aloud in a public meeting, “to bring them of the same way of thinking as the whole nation is, and to be of one talk.”1

Only a generation earlier, at the time of the Ceded Lands crisis, the National Council did not exist. In fact, the political atmosphere in the region was entirely different. There was no Creek Nation, only Creek communities and the hunting lands they all claimed in common—there was simply what is referred to in this study as Creek Country. In Creek Country the same communities existed, of course, yet there was no centralized political authority that bound them together. Instead they were governed entirely by local leaders who neither exercised nor claimed to exercise any meaningful amount of coercive authority even within their own communities, let alone outside of them. Economics and politics were localized as well, while cultural traditions like kinship groups and blood vengeance guided law and order. Any decision of regional importance could only be made with a massive plurality of local voices, and that was a rarity. One headman could not agree to cede land that he hunted on, for instance, because he was not authorized “to make any grant” without the approval of every Creek in Creek Country.2 While that might have been a bit of a stretch, the reality was that Creek Country was a very different place than the Creek Nation. 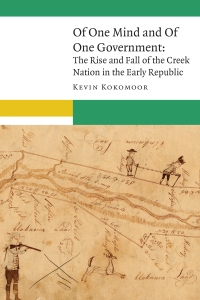 During the Ceded Lands crisis, years before the Revolutionary War came to Georgia, a small group of Cowetas raided settler farms on the edges of Creek Country, where it met an expanding Georgia backcountry. Although the Christmas Day killings were isolated, it was because of the politics of Creek Country that they became a regional crisis. Traditions of local governance ensured that headmen from outside of the responsible Coweta community not only would deny any responsibility for the attacks but would declare their inability to discipline their wayward neighbors, even though they claimed to be the same people. The kinship-based system of justice then failed to right the situation because the kin of the killers simply refused, for one reason or another, to deliver them up to be executed, as they were bound to do by their own legal traditions. Specific headmen, attempting to exert what influence they could via those same kinship networks, also failed to find any sort of resolution. British legislators, unwilling to invade Creek Country, shut down all trade into the region in an attempt to force a solution. Those actions, however, only generated angry and divisive responses. Not all Creeks were the same, as it turned out, at least as several headmen protested, so why was everyone being punished for the actions of a single community? One headman complained bitterly that so few “mad young men should have it in their power” to involve so many “in a war with the white people,” while another declared that the offending towns alone should bear the burden of the trade stoppage and “stand for themselves.”3

As the nature of the Ceded Lands crisis originally revealed, it was the state of Georgia, at least at first, that constituted Creeks’ principal threat. Georgia settlers, once throttled by conservative British colonial officials, were unleashed by a state government as openly contemptuous of Creek culture as they were covetous of Creek lands. Waves of settlers pushed up against Creek communities and their hunting lands, sparking confrontations that dragged Creek Country slowly but steadily into political chaos. At first particular headmen responded to that movement independently, as they had done for generations. But years of political and economic negotiations as well as overlapping outside alliances, all of which shifted over time and differed dramatically from one Creek town to the next, produced little but confusion and hostility. Neighboring headmen were soon at odds with and even violently opposed to each other, not to mention Georgia state officials or their Spanish counterparts. Almost every attempt made by local leaders to react to Georgia expansionism both during the Revolutionary War and in the years afterward only worsened things in Creek Country, producing a cacophony of Creek voices that proved tremendously destabilizing. By the 1790s the region was in crisis, and the Creek political confederacy that had existed in the Southeast for generations was collapsing.