The following is by Hal Elliott Wert, author of George McGovern and the Democratic Insurgents (Nebraska, 2015). Wert is a professor emeritus of history at the Kansas City Art Institute. Last month, he shared newly rediscovered political posters of Eugene McCarthy, George McGovern, and Jesse Jackson.

In my last post I promised a treasure trove of new poster finds promoting black candidates for president. I got my images together in time and I hope this post will serve as a contribution to Black History Month. Because my collection is weak on Eldridge Cleaver for President and Angela Davis for Vice-President posters, I decided to ask Lincoln Cushing for a few images. Lincoln, author of All of Us or None: Social Justice Posters of the San Francisco Bay Area possesses a large collection from the 1960s and 1970s and is a fountain of information. I think you’ll appreciate his contribution. To flush out this blog, I dug around in the history toy box to discover the first blacks to be nominated for President or Vice-President by a political party.

The first black candidate nominated for the Vice-Presidency was Frederick Douglass in 1872. Douglass, without his consent, was nominated by the Equal Rights Party ticket to run with the outspoken Victoria Woodhull, a feminist, who advocated a women’s right to sleep with whomever she chose whenever she chose. Obviously, this raised a number of eyebrows and caused a sensation in the press. The Equal Rights Party didn’t appear on any ballots so it is impossible to know how many voters wrote in Woodhull/Douglass.

Surprisingly, in 1904, when the Jim Crow era was in full swing, George Edwin Taylor and W.C. Payne were the candidates of the National Negro Liberty Party. Taylor escaped the rag-tag existence of his youth by working his way north to Wisconsin, was educated at a Baptist academy, became a reporter, and eventually the editor of the La Crosse Evening Star. He was active in politics in Wisconsin and Iowa long before his run for the presidency. The Liberty Party was skeptical of Republican commitments to blacks and was fiercely opposed to the racist attitudes of the Democrats. The Liberty Party called for reparations for ex-slaves and advocated independence for the Philippines. Black voters stuck with the Republicans, but Taylor did manage 2,000 votes.

James W. Ford, born in Alabama, joined the Communist Party in 1926 while a member of the Postal Union in Chicago. He quickly moved into the top leadership of the party and became the vice-presidential candidate in 1932, 1936, and 1940. The Communist pushed hard on the inequality in American life. Self-determination for the “Black Belt,” an idea based on the Soviet approach to “oppressed minorities” rang hollow with black-American voters. Ford is often referred to as the first black-American candidate on a presidential ticket but that is mistaken. The honor goes to Frederick Douglass as a vice-presidential candidate and to George Taylor running for president on the 1904 National Liberty Party. This eye-catching 1932 poster is extremely rare:

In 1936, Browder and Ford worked hard to convince blue-collar workers that Communism was as American as apple pie. The drawings on this poster were likely done by Hugo Gellert, who created posters for the Communist party from 1924-1980. This 1936 poster is one of his best:

After Ford in 1940, no black candidates were nominated until the racially charged 1960s.  Clennon King ran on the Independent Afro-American Party ticket having garnered a few votes, Clifton DeBerry headed the campaign of the Trotskyite Socialists Workers Party in 1964, but it was the campaign of Dick Gregory in 1968 that achieved national attention.  Gregory, a hilarious, hard-hitting stand-up comedian, played to largely black audiences in Chicago, but in 1961 he broke into the white club circuit and was a regular at Hugh Hefner’s Playboy Club. He was active in support of civil rights, opposed the war in Vietnam, supported Native Americans and stood up for animal rights. In 1968, he broke from the Peace and Freedom Party that nominated Eldridge Cleaver and ran as a write-in candidate for the Freedom and Peace Party. He received a little over 47,000 votes including Hunter S. Thompson’s vote. His appealing blue and white campaign poster is prized by collections and I much regret not including it George McGovern and the Democratic Insurgents (GMDI).

Smaller posters come in a number of incarnations often informing voters how to pull off a write in.

Black Panther Minister of Information, Eldridge Cleaver received the nomination of the Peace and Freedom Party in effort to combine black liberation and the anti-war movement. Cleaver had been in and out of jail for various crimes but it was his book Soul on Ice that propelled him onto the national stage. He became the darling of the radical left. His campaign maintained that he was the “only electoral challenge to the discreditable politics of Nixon, Humphrey, and Wallace.” The campaign secured ballot status in twenty states, but Cleaver only pulled a little more than 37,000 votes, not doing as well as Dick Gregory. I’ve included this well-known poster from GMDI for you to know that it was also printed in red and black by Bindweed Press. If your heart’s set on it or you need another valentine of sorts, you can obtain an image from the Oakland Museum of California History.

Another of the rare posters from the Cleaver campaign, this one was reproduced for a fortieth anniversary celebration. Be careful if you wish to purchase one.

This very rare Cleaver poster is one of my favorites and possesses the classic elements of 1960s radical chic design:

Shirley Chisholm was the first black woman elected to the U.S Congress in 1968 and in 1972 she was the first black candidate to seek a major party nomination. Charming in her flower-embroidered jackets she was a tough politician, “unbossed and bought,” who had experienced much discrimination. She maintained that she suffered more prejudice as a woman than she did as a person of color. I did not know that this Chisholm poster by William Weege in black and white existed until it recently surfaced in an auction. I included the red and black version in GMDI on page 100. There may be other color versions out there as well. Her campaign, while under financed, produced some of the top political posters of the era. See GMDI on page 101 and my early blog that featured the Outrageous poster.

Angela Davis, longtime left wing activist in the 1960s and 1970s and student of Herbert Marcuse, ran with Gus Hall in 1980 and 1984 as the vice-presidential candidate. For a larger poster featuring the two candidates and portraits drawn by Hugo Gellert see page 144 in GMDI.

This 1980 “People Before Profits” poster is also from the 1980 Communist party campaign:

First, imagine my delight to come across a poster that at once looked as if it had been done by Keith Haring for the Reverend Jesse Jackson’s 1984 run for the presidency:

The poster is folded over for framing on the bottom and can likely be repaired. In GMDI, I acknowledged that a raft of striking posters emerged in 1984 but as you see there were far more than I realized. This graffiti-like painting influenced by the street mimics Haring’s popular works that appeared on the walls of subway stations in New York. It is signed at the bottom by E. Mogern. If any of you have information about this poster, please let me know.

So, Let’s Talk About Jesse. Jackson’s civil rights bona fides stretch back to the Selma to Montgomery marches when he worked for Martin Luther King. Later he organized PUSH (People United to Save Humanity) and the Rainbow Coalition. When he announced candidacy for the presidency in 1984 few in the Democrat party took him seriously but in the primaries he made a strong showing coming in third and amassing 3, 282, 431 votes. Perhaps a black nominee of a major party was not out of the question.

This hard-hitting use of history makes for an effective political poster. 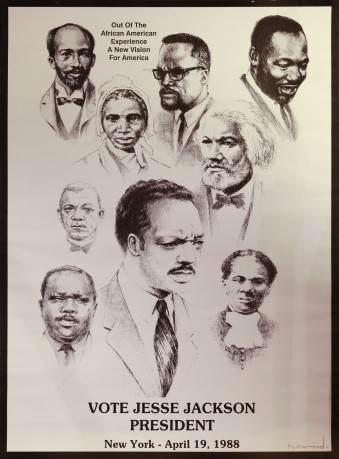 Better financed and better organized, Jackson again sought the presidency in 1988. His image had been tarnished by a number of anti-Semitic comments but he surged in the Michigan caucus after receiving the endorsement of the UAW. Michael Dukakis narrowly beat Jackson in the Colorado caucus but lost by seventeen points to “The Duke” in Wisconsin on April 5. It was over, but Jackson’s two attempts to capture the White House demonstrated that a black candidate could command widespread white support. The above poster on the right drawn by an artist named Mohammad features such black luminaries as Frederick Douglass, Sojourner Truth, Harriet Tubman, and W.E.B. Dubois. I wish I could have included all three of the Jackson posters GMDI.

Yes, I did include this fine Oxbow Press poster by Leonard Baskin in GMDI on page 221. But note, just above the “for” is Baskin’s signature. It is the first I have come across and I have no idea how many he signed in this open edition. 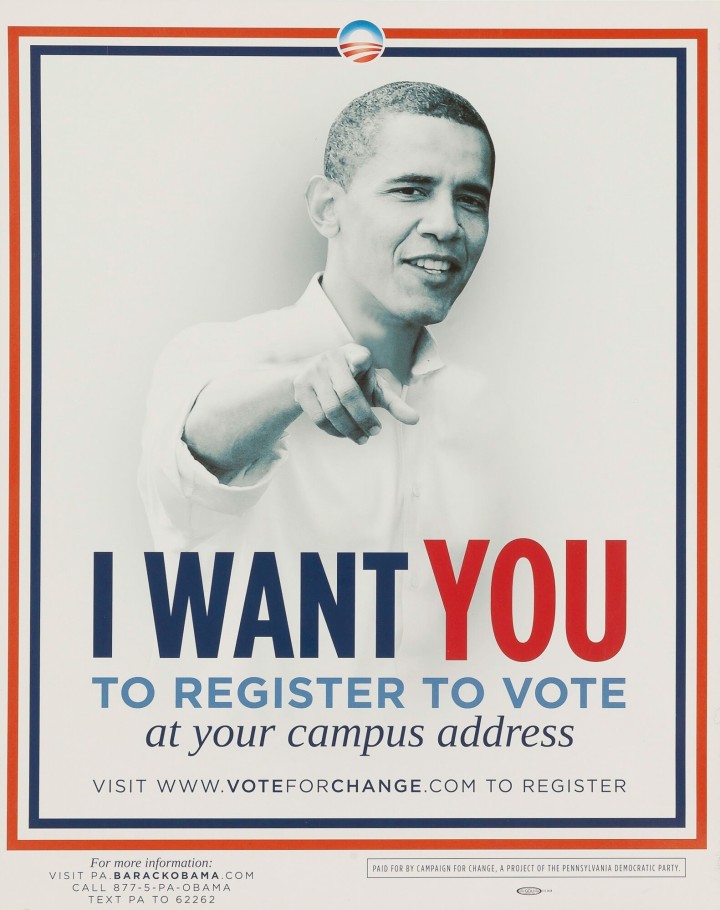 The above poster is one I have long sought as well. After all, how many versions of James Montgomery Flagg’s World War poster can there be? It is a powerful image that will be continually appropriated across the political spectrum and for a wide variety of causes and events. A larger version, 24” x 36” was distributed in Iowa that read “I Want You to Caucus.” This smaller 11” x 17” poster varies as Obama is not wearing his jacket and it reads “I Want You to Register and Vote.” See page 24 in my other book, Hope: A Collection of Obama Posters and Prints (Zenith Press, 2009). The 2008 Obama campaign was one of the great campaigns in American history and his enthusiastic supporters on the left created hundreds of posters as did a plethora of famous artists. Little did anyone suspect that Obama would win the Iowa caucus, secure the nomination by defeating Hillary Clinton, and become the first black president. 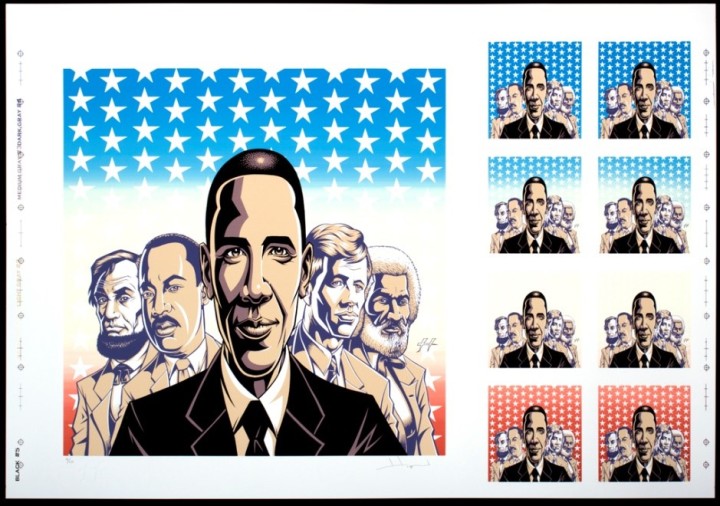 Justin Hampton pulled screen prints for the 2008 campaign in two other colors besides this R/W/B one—silver and gold. This is an uncut sheet and I was thrilled to obtain it. (See Hope, page 114.)

I hope you’ve enjoyed this trip down the highway of history and that in its own small way this blog is a contribution to Black History Month.