“I have finally returned to this tome after a three-year hiatus. I was halfway through it when I got hired at the press, so I had to return the edition I had borrowed from the Carlsbad, New Mexico, public library without finishing. I tried to find that same edition here, because it had these amazing woodcut illustrations, but the ‘illustrated’ version I picked up in Lincoln only has a frontispiece of Mann. Despite it being an expansive, ruminative novel, I didn’t have much trouble finding where I had left off, the scene where Hans Castorp meets Leo Naphta. The plot is essentially a bunch of people stuck in a sanatorium reflecting on mortality and arguing over the merits of various schools of philosophy. You can see why I was inevitably drawn back (after only three years)! Seriously though, it’s a great novel, and I’m looking forward to completing it.”—Elizabeth Zaleski

“It won the Center for Fiction First Novel Prize. It is about urban Indians in Oakland, CA. So far, I love it but it’s hard to keep the characters straight!”—Donna Shear

“I’m finishing this one up this week. The book doesn’t so much explore hauntings as why and how certain supernatural folk stories become embedded in regional and local cultures. What’s most fascinating is how Dickey analyses how some of America’s earliest sins, slavery, the rise of white nationalism during Reconstruction, the cruelties of Manifest Destiny, and a legacy of economic inequality, so often prove to be at the heart of the stories that frighten us.”—Jackson Adams

“I had no idea that she was a social butterfly in college without a real plan for her future. Look at how things turned out for her!”—Erica Corwin

“The premise is interesting–the Civil War never happened, there are four slave states remaining in the Union, the underground airline is the new version of the underground railroad—but the story just isn’t holding my attention.”—Bridget Barry

Merchants of Culture: The Publishing Business in the Twenty-First Century

“This was highly recommended by Matt Bokovoy, and I quickly understood why. Thompson explores the rise and impact of corporate publishing, box stores, and agents, as well as how a myriad of factors have and continue to reshape the industry. I’d be very interested in a new edition to update some of the chapters (the last publication was 2012), though that should not discourage anyone from reading this valuable book in the meantime.”—Heather Stauffer

Dreams from My Father: A Story of Race and Inheritance

“Needing an antidote to the hate speech spewing from the current U.S. president’s Twitter feed, I picked up my paperback copy of Barack Obama’s first memoir. I had a copy but had never read it. Like the critics said, it’s a great book and provides much food for thought regarding race, class, identity, and power. How far we have fallen from this brilliant, thoughtful, and compassionate leader. I can’t wait to read Obama’s forthcoming memoir, after I read The Audacity of Hope.”—Tish Fobben 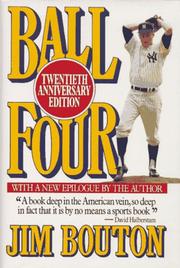 “This memoir forever changed sportswriting, so it’d been on my TBR list for a while. I regret waiting until Bouton passed away to begin getting to know him—his writing is clear, friendly, and angry all at once, like he’s sitting right next to you, just talkin’ baseball.” —Anna Weir