Mark Spitzer is an associate professor of writing at the University of Central Arkansas. He is the author of more than twenty-five books, including Season of the Gar: Adventures in Pursuit of America’s Most Misunderstood Fish, Beautifully Grotesque Fish of the American West (Nebraska, 2017) and In Search of Monster Fish: Angling for a More Sustainable Planet (Nebraska, 2019). Spitzer has consulted for Nat Geo’s Monster Fish and appeared on Animal Planet’s River Monsters. Spitzer’s previous guest posts can be found under the heading “Where in the West is Mark Spitzer?”.

Ho ho ho! Since targeting barracuda in the Dominican Republic, I’ve tangled with them in Africa, Tobago, and Mexico, and I can honestly state that the ones I encountered in the D.R. were by far the most spastic, aggressive monster fish I have ever dealt with in salt water. Not only could I hardly keep a grip on them, not only were they erupting in mind-blowing acrobatics then thrashing and snapping like piranhas on meth, but the ones that had been brained to death were just as lethally vicious, sometimes actually leaping at me for one last lacerating slash. Seriously! 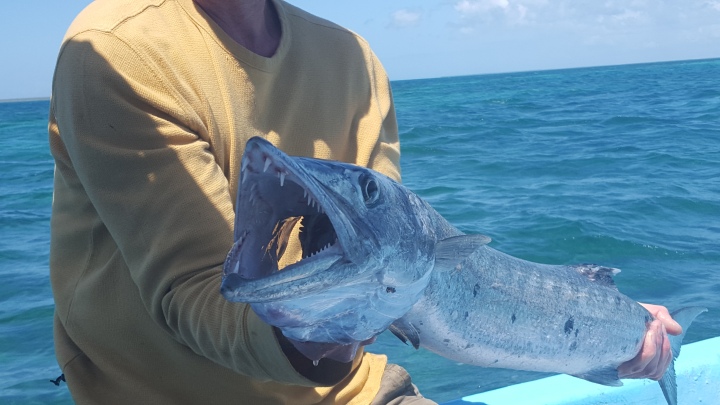 My mission had been to investigate this “tropical top predator renowned for attacking humans and devouring prey with torpedo-like velocity . . . to see if its reputation had been rightly earned” (self-quote), but there was other stuff that happened too. Sure, I mentioned proposing to my wife “in old stone Santa Domingo in a fortress mortared with animal blood” (another self-quote), and I also mentioned how we almost never came back from a violent deep sea-fishing trip, but that’s not what I focused on. What I focused on was the Chaos of Cudas & the Caribbean.

Why? Because that’s just what rose to the top: the Chaos of these razor-fanged fish swimming around in biker-like wolf packs; the Chaos of political loudspeakers smashing and clashing with ear-bursting music blasting in the Spring Break streets; the Chaos of Hispaniola’s history of piracy and slavery and genocide and hurricanes and Haiti and shipwrecks and storms wiping out life like lightning striking from the sky. Because that’s the impression I was left with—which isn’t the usual route I take.

The usual route I take is to study a fishery’s issues, consult a few authorities, then make some sort of observation about what needs to be done to sustain an environmental niche. But not in this chapter of In Search of Monster Fish—partly because I was still searching at that time for the hook of the book, but mostly because barracuda are the pure embodiment of Chaos: in the boat, in the air, in their tornadic circulations, and in the toxic strains of ciguatera which leave people as spleen-bleeding masses of gastro-distress.

2 thoughts on “Where in the Monster Fish World is Mark Spitzer?”