Since 2006, the University of Nebraska Press has worked to publish The Complete Letters of Henry James, an acclaimed series that fills a crucial gap in modern literary studies by presenting in a scholarly edition the complete letters of one of the great novelists and letter writers of the English language. Comprising more than ten thousand letters reflecting on a remarkably wide range of topics—from James’s own life and literary projects to broader questions on art, literature, and criticism—these editions are an indispensable resource for students of James and of American and English literature, culture, and criticism.

Were Mr. James around today, we think he would be delighted to contribute to the UNP blog. Today we’re sharing one of his many letters, written on New Year’s Day in 1882.

From the Desk of Henry James

The following is an excerpt from The Complete Letters of Henry James (1880-1883) Vol. 2 by Henry James, edited by Michael Anesko and Greg W. Zacharias (October, 2017). 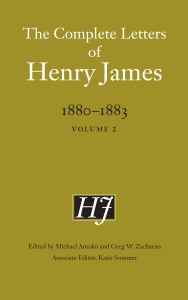 Westminster Hotel
Jan 1st 1882.
My dear Godkin.
I can’t leave New York, as I am sorry to say I do tomorrow before you arrive, without leaving behind me a word of greeting & gratitude—to say nothing of regret. It is a stern engagement to pay a visit—at Butler Place—which makes me apparently evade you by a few hours, & which also starts me so well on the road to Washington that I have determined to go the rest of the way without more delay, & seek my fortune at the National Capital. I will write to you from there, as soon as I see what my impressions & circumstances are. These latter are already partly constituted; through Henry Adams having taken rooms for me at 720 15th st.; where I shall be delighted to hear from you. (I remain only two days at Butler Place.) I came back here on Thursday a.m., & could not, in spite of your noble assurances, reconcile myself to using your house as a mere convenience, leaving it as you were about to arrive: though, in consequence, I was have been terribly homesick for it! Cambridge was brilliant as usual, & it must be admitted that—au fond—there is no place like it. I spent a genial Xmas there, & I hope your own has been of the same quality. I saw a good deal (for the time) of Grace Norton, & something too of Charles. They are terribly distinct (from each other,) & I think he barely recognizes her existence—though I did see him speak to her at a certain charades given by the little Childs. It is an immense pity you were not back in time to go with me to dine at Whitelaw Reid’s last night—a gorgeous flowery banquet, of which I was apparently the pretext & hero. It was 1/2 Californian, 1/2 Tribunitian, & altogether curious & queer. You shall have details when we meet. This is the only thing, to speak of, that I have done—being here “incognito.” I trust Cincinnata has been kind to you, & that Lawrence has sipped its sweets. My blessing to him & my best wishes for the coming year to both of you. I shall write you again, promptly, from Washington, & meanwhile am very faithfully yours   H. James jr