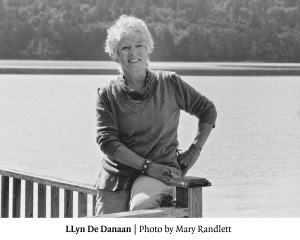 LLyn De Danaan is a writer and an anthropologist. She contributed to the book Vashon Island Archaeology: A View from Burton Acres Shell Midden, and her articles have appeared in Women’s Studies Quarterly, Columbia: The Magazine of Northwest History, and Oregon Historical Quarterly.

The publication of Katie Gale: A Coast Salish Woman’s Life on Oyster Bay is the happy product of many years of work. Katie Gale’s story started in the mid-nineteenth century. My path to her began in the early 1970s when I was searching for a house and a little land. I didn’t want anything fancy, just a basic structure; one I could live in while making improvements. It had to have a well and power. That would save me money and inconvenience, and I could get right on fixing up the place. Of course, it had to have a road. I didn’t care about waterfront or a view. I had a partner then who had built a house in the New Hampshire woods. We believed we could tackle the humblest little dwelling and the most rugged of circumstances.

My real estate agent was a soft-spoken elegant woman with a slight German accent that attested to her origins. She wore her blonde hair in a sophisticated frenchtwist, walked like chilled champagne, and drove a bright yellow Cadillac in which she transported clients for a look at her listings. I had Janis Joplin hair, wore jeans and safari boots, and had a faculty position at a brand-new, controversial local college. I had managed to buy a house in Olympia with most of the first year of my salary. It was an okay house, but my new friend wanted to live in the woods. She had already jumped her first local ship for a loft in a barn out on rural Steamboat Island Road. I thought, having no particular ties and being ready for adventure, why not make a move? I called the real estate agent, and we began the search.

When we drove to the house I ultimately purchased, the lovely, classy blonde behind the wheel was nervously apologetic. This property was not something she would normally show or be caught dead in. The main structure was all but smothered by locust trees, Douglas firs, and Himalayan blackberry vines. Indeed, there was no hint of a view or Puget Sound, much less Mount Rainier. All these yet-to-be-discovered perks of the place were well hidden and not even known to my agent. Several goats were dancing around in a barely fenced bit of land next to a large but shabby shed built on a framework of logs. There was nothing but mud between the shed and the house, which was a simple thirty-by-thirty-foot square. It was heated by an oil stove, the misuse of which had stained the ceiling badly. But that was of no concern because the rest of the ceiling and walls were covered with moss—or was it mildew? The bathtub was settled into the sagging, termite-infested floor by several inches. In my enthusiasm, I declared the house perfect.

And it was. During the next couple of weeks, another friend bought the defunct oyster company digs below my place. The company extended out over the water and adjoined the beach that I was soon surprised to discover was part of my property. Bleached oyster shells were everywhere. At that point we knew nothing about what that meant for the history of our new homes. After my house and the company were secured, another friend approached the people who lived in the small cabin next to mine. Though the place had not been for sale, the couple had decided just that week to divorce and would my friend like to buy? Both of these friends are still in residence. Something, some great luck, some brilliant understanding of what our lives could be brought us to Oyster Bay and we stayed.

We moved in and the work began. First, my housemate pal, the one with the experience in building, took a sledgehammer to a kitchen wall. We were lucky enough not to have the ceiling fall on us. Though her method may not have been elegant, the result was a vastly more expansive room. I began to see possibilities. I rushed to buy chickens and geese and ducks and rabbits. (The goats had not been permitted to stay.) About this time my parents came to visit. After a first look, my mother took to her bed. My father declaimed in my favor. He prophesied that the house and property would eventually be a showplace. Even I wouldn’t go that far.

Over the years some things didn’t fulfill the bright promise of those first days. The house got some attention every year or was changed out when I had money or when someone else joined me on the bay. My professional work and interests changed. I had devoted my early years as an anthropologist to Southeast Asia, particularly Malaysia. But when my child arrived, I didn’t have the means or time to keep traveling.

One day, while I was teaching at Evergreen State College’s urban Tacoma campus, one of my students, Margaret “Midge” Ward, approached me. “The Puyallup want you,” she said. Midge was an older student who was also a drug and alcohol counselor. She later worked for Indian Child Welfare. I didn’t know then, or indeed until she passed away, that she was a hotshot pitcher for the Quileute women’s softball team. One story says her family played all the bases. I also learned that she captained a women’s canoe that went out for smelt to raise money for softball uniforms. These trips out for fish were not without incident. There is a story of an orca coming down hard on her canoe, crew, and their full net. Midge shouted to the women, “Holy crap, sisters, Let go!” Midge avoided the orca and still got a set. Midge was a wiry woman with a mullet, more homage to her heritage than to the then latest fashion trends. In spite of my protestations, Midge brought me along to meet the legal and cultural resource staff at the offices of the Puyallup Tribe of Indians. Judy Wright, the tribe’s celebrated and beloved historian, and the two attorneys, Annette Klapstein and Debra O’Hara, greeted me. They would be my colleagues throughout a landmark case involving the tribes of Washington State and their treaty rights with respect to shellfish[1] and in many other projects for years after.

In those days, the cultural resource and law offices were housed in the old Cushman Indian Hospital on the Puyallup Reservation in Tacoma.[2] The hospital building, a former federal Indian hospital and site of enormous pain and suffering for many years, was crumbling and the surroundings so hazardous that chain-link fencing was erected around the perimeter to contain the falling bricks. The old edifice’s failing elevator often got stuck between floors. I would holler for Judy when it faltered and trapped me. We powered our coffee pots, computers, and lamps by snaking long extension cords up and down the hallways. The whole enterprise was a challenge and an initiation into my new life.

I was poised, then, to “meet” Katie Gale. I lived on Oyster Bay and I had my teachers. When I first saw Katie Gale’s tombstone, just down the road from my home, I was ready to tell her story and begin the real work.

[2] The Cushman Hospital was taken over by activists   and claimed for the Puyallup Tribe in 1976. Ramona Bennett led the takeover.