Congratulations to all 2014 Nebraska Book Award winners! UNP is proud to have four titles honored in this year’s competition.

When a tractor accident fells the patriarch of an eastern Nebraskan family, the threads holding them together are suddenly drawn taut, singing with the tensions of a lifetime’s worth of love and faith, betrayal and shame.

A biography of Mildred Dee Brown, co-founder of the Omaha Star, the longest running African American newspaper founded by a black woman.

Non-Fiction: History
The Last Days of the Rainbelt
By David J. Wishart

A geographical history of eastern Colorado, western Kansas, and southwestern Nebraska during the 1890s drought. 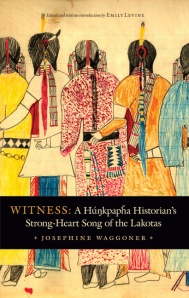 A collection of previously unpublished manuscript histories of the Lakota by a Lakota woman, based on interviews with some of the most prominent and well-known Lakota leaders of the late nineteenth and early twentieth centuries.

The Nebraska Book Awards program, sponsored by the Nebraska Center for the Book (NCB), recognizes and honors books that are written by Nebraska authors, published by Nebraska publishers, set in Nebraska, or concerning Nebraska.