The following contribution is from Ann Sittig and Martha Florinda González, authors of  The Mayans Among Us: Migrant Women and Meatpacking on the Great Plains (March 2016). Sittig is a tenured Spanish instructor at Shasta College in Redding, California. Florinda González emigrated from Guatemala to Nebraska and is a community leader in Nebraska. She has served as a member of the Coordinating Commission for Indigenous Women and the Technical Commission for Negotiations, and on the Commission for Women in Guatemala.

The International Organization for Migration, an organization of the United Nations, estimated that between one and 1.5 million Guatemalans are in the United States. Sixty percent are of an undetermined status. The men emigrated first, followed by women, children, and more recently unaccompanied minors. The Mayans Among Us includes extensive interviews with five Mayan women, and one Ladino man, a former soldier, all of whom were living in the small eastern Nebraska cities, working in the meat processing industry. Given the sincerity with which they responded, and the duration of the interviews, we are confident that what they told us is repeatable for many, although their individual circumstances are different. Their taped accounts remain confidential and put a human face on the reality of those emigrating from Guatemala and other countries exposed to violence and war. Thus, we now question the effectiveness of armed conflict to enhance domestic and/or world order. War, especially long-lasting war, displaces citizens and undermines societies. Many Mayans, finding no better option to deal with the thirty years of war-induced chaos, decided to flee Guatemala to seek a better life in the U.S. They were motivated by their desire to help themselves and their extended families to prosper despite the violence perpetrated by both domestic and outside forces.

Historically the U.S. is a nation that was founded and built by immigrants who arrived fleeing religious persecution and seeking economic opportunities. Most faced few, if any legal barriers, unlike nowadays. This country has always been made up of immigrants. The only true native peoples to this land are the indigenous. The Mayans are the indigenous that settled in Central America and Mexico. Their origins in the Americas date 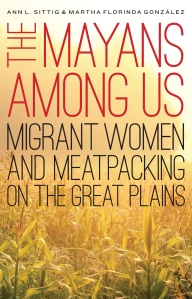 Our book narrates the difficulty these Guatemalans have once they decide to leave. First, they make the harrowing trek over the borders, paying bribes to the surveillance officials and to those guiding them, the “coyotes,” who cheat them for their services. Then comes other struggles, if and when they reach the U.S., such as paying the huge costs and debts to their families, who often mortgage their properties for ready cash. The Mayans also emphasize how tenuous their presence is in a new country as they attempt to integrate themselves in their new communities and succeed at their new jobs, despite not knowing the language. They often seek solace in churches and religious assemblies while devoting most of their time and energy to their workplace.

The interviews also instruct us with glimpses of their country’s history, mores, and social structures which they have absorbed in their personal experiences, but they realize that it is in these new communities where their well-being now lies, so they strive to avail themselves of the social and educational services gradually being provided them. The census figures and the Latino population increases in some Nebraska meatpacking cities over the last decade are detailed, noting how transnational migrations are changing the face of Nebraska cities. The Mayans are aware of their potential impact on their new communities, and they hope and expect our governments will adopt policies that will continue to make them equal, so they too can pursue the dreams of security, freedom, and protection which this nation has stood for over its history.

The Mayans came to Nebraska to work at the meatpacking plants, following the national and transnational migrations that have always supplied laborers for the plants since their openings. Nebraska is a leader in U.S. commercial red meat production, and it is one of its largest and most important exports. Immigrants are tightly interwoven with meatpacking industries and subsidiaries in Nebraska, as well as in the global economy. Personal observation showed the workforce is made up by a vast majority of Latino workers, and one large plant confirmed eighty-five percent of their workers are Latino. Given the decentralization of the red meat industry in the past few decades and the large numbers of immigrant workers the owners rely on, the challenge to effectively integrate them has shifted from the large cities, such as Chicago, Minneapolis, and Omaha, to many smaller cities. Again, this means integration could and should be easier and more quickly achieved, which would be beneficial for the small cities, the plant owners, the immigrants and their families, and ultimately our nation and the world.

Once jobs are landed the news is quickly communicated back home; the Mayans all knew a compatriot when they arrived. And the money earned by immigrants on the line enhances both local and foreign economies as they send remittances from the U.S. to Guatemala. The payments have become a significant backing to Guatemala’s economy.

Much of the rhetoric on immigration in the U.S. public arena comes from those seeking to benefit themselves rather than from the mouths of those trying to get to or stay in the U.S. Most importantly, this book reveals the human side of their profound, dignified lives and of the dreams of immigrant workers in providing for themselves and to help build the institutional fabric of their communities. Those interviewed candidly recount their experiences, but the authors keep their identities anonymous given their precarious documentation status. They want their stories to be heard, in an effort to communicate with their fellow neighbors and compatriots. The model citizenship displayed in their lifestyles counters the xenophobic, anti-immigrant rhetoric pervading our election campaigns and political advertising, which, in our opinion, is very harmful to contemporary global well-being. This book is very appropriate for the times because it reflects the human decency of these immigrants during an era when both they, and other international refugees are being devalued, if not shunned, by far too many calloused community leaders. The immigrant voices heard here are those of a personal nature and they clamor for improved social justice. The Mayan vision of the cosmos presented in the book reminds us that we are all one people residing on a shared planet, our Mother Earth. This vision questions why any human being would claim more entitlement to a place here, based simply on one’s material wealth or social standing, which can in turn be wielded to sway public policy. Working with dignity, and having access to education and social services are basic human rights, and an immigrant deserves them like any other person.

Humanity must continuously analyze and evaluate history and public policy to decide how we, as global citizens, will respond to this increasing movement of aggrieved peoples toward economic stability. History need not repeat itself; will we step forth and move our evolutionary progress toward a more social and just polity, by adopting a clear and humanitarian immigration policy that is in accordance with the Resolution of the United Nations on International Migration and Development? We hope this book, The Mayans Among Us, will result in a much increased impetus toward progressive immigration policies in the U.S. and elsewhere.