The following is an expert from Eyeing the Red Storm: Eisenhower and the First Attempt to Build a Spy Satellite (April 2016) by Robert M. Dienesch.

FROM CHAPTER 6: Satellite Photography, Film Return, and the Birth of CORONA (1957-58)

The historical record of WS-117L becomes increasingly unclear after Sputnik, partly because of the flurry of activity that followed it and partly due to the scarcity of information about developments. 13 The gaps in our understanding are ironic and unfortunate, for the most pivotal moment of the whole story occurred between October 1957 and March 1958, a period of fundamental reorganization. On October 6, 1957 WS-117L had consisted of a single satellite, but in November 1958 the Department of Defense revealed that it consisted of three satellites: DISCOVERER, SENTRY, and MIDAS. DISCOVERER was a research-and-development satellite for testing system components and for research in various areas, including biomedical studies. In reality this was the cover for another reconnaissance satellite, CORONA, which used a system that returned film to Earth for processing. The film readout system, the core of the WS-117L concept, was dubbed sentry, an innovation discussed in detail in chapter 7. Finally, the infrared detection system designed to warn of a Soviet missile attack, originally part of WS-117L, was given its own satellite, called MIDAS.14

The historians Jeffery Richelson and Robert Divine refer to these three programs as subparts of the entire effort and as being in place prior to Sputnik. However, they do not explain how or when a single satellite suddenly became three divergent systems. Most scholars have argued that the film-return system was part of WS-117L before Sputnik. They portray it as part of the overall program, a continuation of the WS-117L concept; its separate development and operation became essential after it seemed apparent that WS-117L could not meet its schedule. These theories, however, are derived from information before declassification. No historian has provided a specific account of when the program added film return or of the impact this had. 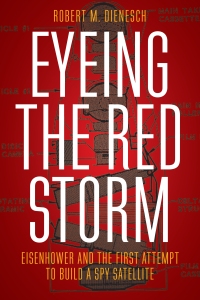 Before exploring Sputnik’s effects on U.S. satellite reconnaissance, we should place the origins and development of the CORONA concept in its proper context. It was the idea of a second satellite program, revolving around film return, that emerged in early 1956 and was ready for serious consideration on the eve of Sputnik. CORONA joined WS-117L in Sputnik’s wake, and its association with the earlier effort was brief. With this development in mind we can see Sputnik’s impact for what it was: a catalyst to American satellite reconnaissance.

RAND was not idle following release of the FEEDBACK report in 1954. Rather it expanded its staff and kept current about the latest developments in what it still considered its program. It was not until early in 1956, however, that its team became vocal again about satellite reconnaissance. Aware of problems with WS-117L’s film system and of new developments in the field, the group reconsidered a satellite that returned its film to Earth for processing, even though it had rejected the prospect a few years earlier.

Richard C. Raymond, a physicist and expert in information theory and a member of RAND’s Electronics Division, looked at how much information was theoretically available from intelligence photographs and negatives. When comparing WS-117L’s film-readout system then in development (similar to television technology of the period) and the amount of information available from direct examination of photos and negatives, he came to a startling conclusion. Assuming that both types of images came from the same altitude, the standard film would produce roughly two orders of magnitude more data. To make matters worse, the radio bandwidth for transmitting data was very narrow, so relays to Earth would be very slow. Television imagery, then, would be far inferior to photography. Admittedly no one had expected that the television system could compete with normal photography, but no one had realized just how much information was at stake.15

In light of this revelation and of advances in reentry technology that came from ICBM research and development, RAND’s president, Frank Collbohm, with the help of a rand researcher named Brownlee W. Haydon, prepared a formal recommendation to the air force’s air staff in March 1956. “Photographic Reconnaissance Satellites” called for development of a recoverable satellite system. RAND withdrew the recommendation, however, within a few weeks for reasons that remain unclear. According to Merton Davies, one of the firm’s experts, the materials relating to the decision were destroyed after the withdrawal, so the reasons may never be known. Raymond, however, recalled that the air force was concerned about the time lag between the taking of the photo and the information becoming available. WS-117L offered the theoretical prospect of quick access to the data, almost in real time. A film return or drop-film system, as rand proposed, would mean a built-in delay between intelligence gathering and film recovery. Furthermore no one knew yet if recovery was feasible. Until an in-depth study comparing WS-117L and the drop-film proposal could be completed, the air force had no reason to accept this proposal. Hence later that same year (1956) it contracted with Lockheed to develop the WS-117L system.16

Nevertheless rand continued to explore the technology of returning film to Earth. By June 1956 Enough progress had been made that it could issue a research memorandum on the physical recovery of payloads. J. H. Huntzicker and H. A. Lieske’s “Physical Recovery of Satellite Payloads—A Preliminary Investigation” clearly demonstrated that a film-returning satellite system had strong merit. First and foremost, it could collect more information than a relay satellite. Photos offered greater resolution (and therefore more information), and captured data about the environment the satellite worked in would increase scientific knowledge and provide an understanding of, among other things, the conditions affecting film, the camera, and orbits. Second, film return was likely to provide intelligence sooner. The complicated nature of the WS-117L system, and its projected 1960s operational date, meant that it would be years before it was ready to work. The simple film-recovery satellite could be utilized almost immediately for intelligence gathering. Third, the recovery technology for film was seen as a major step toward manned flight in space.17

The successful recovery of a capsule from orbit depended on three elements. First, the satellite trajectory or orbital path would need modification so that the satellite would reenter the atmosphere at a predetermined point and have time for successful landing and recovery. Second, it was essential to protect the payload from heat to ensure the integrity of intelligence materials. Third, a means of locating and retrieving the payload was crucial.