This year the National Park Service celebrates its 100th anniversary and as the National Park Foundation said, “the Centennial is more than a birthday. We want people everywhere to embrace the opportunities to explore, learn, be inspired or simply have fun in their 407 national parks….” UNP asked its authors to write about their favorite National Park to contribute to the #FindYourPark campaign on social media.

My connection with Yellowstone National Park began seventy-seven years ago. For my first eighteen years I lived in Billings, Montana, the second daughter of profes

sional musician parents. They were private music teachers of piano, but my father also taught organ and voice. It was during the Depression years when I came into the picture; in subsequent years my father took summer jobs in several Rocky Mountain locations to make ends meet. From 1939 through 1942 he served as Transportation Agent at Old Faithful Village. During that first summer my mother also worked—as a member of the Ladies Ensemble of Billings, playing teatime music in the afternoons and dance music in the evenings for guests of the beautiful Old Faithful Inn.

To this day Old Faithful Inn is like a second home to me. I remember playing hide-and-seek with my sister, Joan Orvis, in the inn while my mother rehearsed with her musical group. Later in the day a bellhop might pop some corn in an oversized popper in the lobby’s huge four-sided stone fireplace. The fireplace still attracts lots of visitors—but no popcorn these days.

A few times during our summers in the park we were allowed to go up the many stairs high above the lobby and out onto the roof. I remember the five flagpoles with flags always snapping in the wind and the unique two-person wicker chairs, shaped like an S. I got to see some Old Faithful Geyser nighttime eruptions lit by spotlights, but that usually happened too late for us little ones. It was thrilling to see—but discontinued in 1948 as being inappropriate for a national park.

Here are some of my fondest memories of being in Yellowstone as a child. My mother drove Joan and me to wait for Lone Star Geyser to erupt (now the old road is a bicycle and pedestrian path). Other times we drove out to Great Fountain Geyser, taking along our Parcheesi game for the long wait.

I remember eating the fresh-caught trout that my father brought in after work, rolled in cornmeal and fried by my mother over the tiny burner in our bunkhouse room.

I even learned to swim in the Old Faithful Swimming Pool, in water piped down from Solitary Geyser. Usually no one was there in the mornings but the lifeguard and us, perfect for private lessons. The pool was removed in the 1950s. 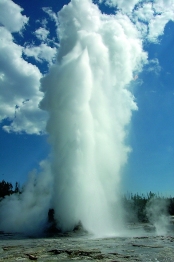 y love of stargazing surely began in the park. I had no idea how fortunate I was to be able to see a sky full of stars, including the amazing Milky Way. Now even when you get away from the lights—and the National Park Service is making every effort to reduce light pollution in the parks—today’s Yellowstone skies can’t compare.

My most thrilling geyser-viewing memory was when I was roused in the night to drive over to see Giant Geyser erupt. Daddy took me on his shoulders so I could see over the crowd. The first half of the 1940s was a relatively quiet time for Giant, so my experience was a privilege. The next eruption I witnessed was over sixty years later, on July 3, 2006. It goes to show how some geysers can surprise you over time!

In my blog, I have summed up my early summers in unique Yellowstone: “I now realize how extremely fortunate I was to spend so much time during formative years in the magic environment of Yellowstone. It is ironic that one of the most potentially dangerous places in the world—the Yellowstone Caldera—is also, if one takes sensible precautions, one of the safest.

“Our months in the park were some of the most benign and happy of my life. No doubt this is why in my later years I have been thoroughly engrossed in learning and writing about the park I love.”

Skipping ahead fifty-some years, I gradually transformed myself from a professional cellist into a writer about this place I had loved for so long. As a contribution to the celebration of the National Park Service’s centennial year , this June Granite Peak Publications is releasing my collection of early accounts by travelers to the park between the years 1870 and 1916. Through Early Yellowstone: Adventuring by Bicycle, Covered Wagon, Foot, Horseback, and Skis samples the various uses the park has been put to. Its center piece is a pair of articles illustrated with many engravings and 26 watercolor sketches by a Welsh visitor, Thomas H. Thomas. His paintings have never before been seen in this country. The scenes Thomas encountered in 1884 remain today, but people now look vastly different from those he painted—as these sample engravings made from his watercolors show. 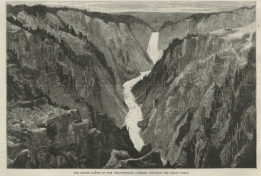 I continue to visit Yellowstone every year and always get goose bumps when I see my first Old Faithful eruption of the year or gaze again into the gorgeous canyon. Always learning and marveling. It’s a limitless love affair.

3 thoughts on “From the Desk of Janet Chapple #FindYourPark”