The following is an excerpt from The Lost Journalism of Ring Lardner, edited by Ron Rapoport (January 2017). You can listen to an interview with Rapoport on NPR Books here. 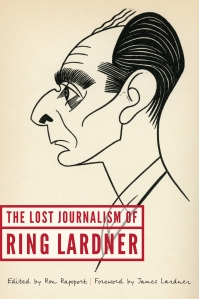 Washington, D.C.—Well, the boys wanted this inauguration to be pulled off with Jeffersonian simplicity and it looks like they are going to get their wish. The old town is filling up with simps and by tomorrow night they ought to be as many of them here as during war time.

Amongst the young visitors expected tomorrow is Sammy Pass16 of Chicago, the boy that showed up the 1919 world serious scandal. He is coming to see that the inauguration is on the square and that Mr. Harding is really toying when he makes his speech. But don’t think I am including Mr. Pass in the list of simps. Sammy is unmarried and nobodys fool.

Plans for Friday’s simple ceremonys is practically complete, the committee from congress will pick up Mr. Harding and Mr. Coolidge at the New Jess Willard at 10:30 a.m. and take them to the White house to get the rest of the party. They will be 6 or 7 automobiles in the parade from there to the capitol. Messrs. Wilson, Harding, Knox and Cannon will ride in the first, but Philander and Joe is still scrapping over which one will drive. Boys will be boys.

The 2d car will carry Mrs. Wilson and Mrs. Harding. Messrs. Marshall and Coolidge will be in no 3 and Mrs. Marshall and Mrs. Coolidge in no 4. Mr. and Mrs. Lardner, however, is still on such terms that they can ride together in the same car.

They will be still another machine for the secret service and a good many of the guys that hangs around Washington in officers’ uniforms is fighting for places in this car on the grounds that if they ever seen service its a secret.

The parade will go from the White house to the capitol escorted by the US cavalry which hasnt had no outing since the civil war. Mr. Harding will be swore in on the east portico. The original idear was to have him take the oath inside the building, but Gen Dawes used all they had there.17 Both Mr. Harding and Mr. Coolidge will both make speeches and I called up Mr. Burleson to find out what they was going to talk about, but he said he dident know nobodys address.

Pretty near all the members of the Harding cabinet is in town all ready. Mr. Weeks called on Newt yesterday and asked him all about the war department and will go to work next Saturday with an open mind. It was generally supposed that Chas Hughes was going to be secretary of state till it come out in the papers this morning that he had moved here with his family and took a house, so it looks like he intended to go into some business in Washington.

Mr. Hayes was on the scene early and him and Mr. Burleson was showed through the PO department where they seen many different colored stamps. They laughed heartily at a blue one that says “special delivery” on it. Mr. Hays wouldnt take no chances and wore a big placard on which was wrote: “Return after five days to Will H. Hays, Shoreham Hotel.” Which reminds me of a gag I just thought up. Suppose somebody was to phone the Shoreham and say, “Is Mr. Hays there?” “Why, yes,” the clerk would reply. “He is amongst the registered males.”

At this writing, all the cabinet jobs has been officially announced except secretary of labor which the favorite for the job is J. J. Davis, head of the Loyal Order of Moose. I heard they was 2 things delayed his appointment. One was that Mr. Harding dident want no lodge in his cabinet or he would of chose Henry or Sir Oliver and the other was that the salary is only $12,000 per annum which you cant expect a labor man to live on, let alone pay his loyal moose dues.

The new president has give it out that he won’t tell us for 2 weeks who is going to be US ambassadors to different foreign countries. He would like to go to France himself as he used to play a French horn in the Marion band but congress wont stand for no more presidents monkeying around gay Paree. All the other diplomatic posts is a secret except ambassador to the court of St. James which they say W. R. Hearst will have first refusal of it.

Personally I and the Mrs. is putting up at the Wardman park hotel which admits its the most exclusive hotel in Washington and as far as we are concerned its telling the truth. If it was a couple of more miles from where its at, it would be the most exclusive hotel out of Washington. I rolled a cigarette in the dinning room this am and the waiter looked at me like he thought I was a hick so I left him a dime to learn him different.

Tonight we was hosts and guests at a theater party in Waydown East but we dont intend to do much socially until we get invited some place. I didnt let nobody know I was coming, but I noticed that several persons looked at me on the streets today. I seem to be the only guy in town thats wearing a winter overcoat.

They are planning a charity ball at the Willard Friday night to take the place of the inauguration ball, but when I and the madam had made a couple of taxi trips from the hotel to town and back we decided that charity begins on longisland.