The following has been excerpted from The Cruft of Fiction: Mega-Novels and the Science of Paying Attention by David Letzler (June 2017).

Introduction: Information and Attention in the Mega-Novel

The Agony and Ecstasy of Big Books

Why do we respond so strangely to big books?

I mean a certain type of big book: the extremely literate, erudite tomes around which one must plan one’s life for a month; the books one hesitates to approach without the assistance of a university course, a reading circle, or at least a reader’s guide; the books whose spines stare down from bookshelves, holding dominion over entire rooms; the books that inspire fanatical devotion and revulsion in equal parts, even though both seem exaggerated well beyond even the books’ own elephantine materiality. I mean the books Frederick R. Karl calls “mega-novels,” most notably including ambitious work by postwar American writers like William Gaddis, John Barth, Thomas Pynchon, Don DeLillo, and David Foster Wallace, but also, if we take a more catholic view, earlier behemoths like Gertrude Stein’s The Making of Americans and James Joyce’s Finnegans Wake, as well as contemporary global novels ranging from Haruki Murakami’s The Wind-Up Bird Chronicle to Roberto Bolaño’s 2666.1 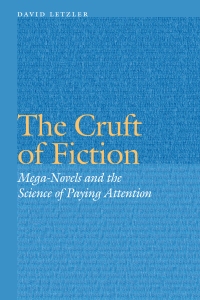 I ask this question because it seems that mega-novels’ most distinctive quality, outpacing even their inimitable heft and learnedness, is the way they prompt otherwise sensible readers into hyperbolic responses. In some readers mega-novels inspire love and reverence, exemplified by Tom LeClair’s declaration that “our big books are our big books,” because they “gather, represent, and reform the time’s excesses into fictions that exceed the time’s literary conventions and thereby master the time, the methods of fiction, and the reader.”2 For other readers, though, the words most often used to describe mega-novels (and their devotees) include “disgust,” “illegitimate,” and “frauds”—though such readers will also admit to feeling “deeply ashamed” at their own inability to appreciate these books.3 It is not uncommon, in fact, for these contradictory responses to be produced in the same readers: Jonathan Franzen, for instance, credited the inspiration for his bestseller The Corrections to his devotional reading of Gaddis’s The Recognitions but subsequently railed that most mega-novels, including Gaddis’s, merely “punis[h] the reader,” with their excess and difficulty just a “smoke screen for an author who has nothing interesting, wise, or entertaining to say.”4 We might understand, then, why Mark O’Connell’s widely read essay about mega-novels claims that the experience of reading them resembles Stockholm Syndrome and that the discourse surrounding them “has at least as much to do with our own sense of achievement in having read the thing as it does with a sense of the author’s achievement in having written it.”5 Similarly Raymond Federman seems on point in observing that, whereas once upon a time one needed to have read the latest ambitious novel to appear cultured, a reader now need merely declare on which page of a mega-novel he decided to give up.6

What causes this array of responses? Their length goes only so far in explaining it. Most long novels do not provoke the kind of reactions described above—consider V.  S. Naipaul’s A House for Mr. Biswas or Tom Wolfe’s The Bonfire of the Vanities, to say nothing of Harry Potter or Twilight. The books’ difficulty and its relationship to pleasure seem important, too, but explaining exactly what we mean by these terms is not easy, especially since many mega-novel admirers deny that mega-novels are either particularly difficult or unpleasurable.7 Our inability to clearly lay out exactly why mega-novels provoke these reactions, I suspect, is why existing conversations around them get so wound up in circular logic and polemic regarding the conflicts between realistic and experimental fiction, the competition of commercial and artistic interests, the place of entertainment in the reading process and contemporary capitalism, the indisputability of taste, and so on.

Something else is going on. Consider, for instance, this excerpt from Gaddis’s dialogue-loaded J R, about a sixth-grader who wheels and deals his way into a Wall Street empire from a cafeteria phone booth:

—Tell them he’s been wait give it to me can’t tell what he’s been, hello . . . ? Not here right now no he’s been . . . Davidoff yes Davi . . . Cohen oh calling on Nepenthe yes ran it up to sixteen today think the Boss is sitting tight on about nineteen percent of the issue just wants control so he can . . . wait no wants to work the nursing homes into this Health Package made to order outlets for Nobili got Hopper here now with his cemetery Brisboy bringing in his funer . . . what? General who? One thing we need right now anoth . . . Oh why didn’t you say so without the h yes why didn’t you say so, thought you were on your way up brought in one of our own legal boys waiting here now to go over your figures had Piscator run down your Dun and Bradstreet told the Boss you looked a little overextended mentioned controlling interest in another company sounds dead on its . . .8

How, exactly, can we characterize this whirling array of verbal static and interchangeable financial jargon, which begins one of the book’s typical page-long stretches of one-sided telephone dialogue? I will offer a counterintuitive thesis, one that I believe identifies the characteristic feature of all mega-novels: this passage stands out because it contains a lot of text that is, basically, pointless.