The following has been excerpted from The Spirit and the Sky: Lakota Visions of the Cosmos by Mark Hollabaugh (Nebraska 2017), in honor of the solar eclipse occurring today.

From Chapter 7: Eclipses and the Aurora Borealis

Although celestial displays that occur over repeated and easily measured time intervals are the basis of time-telling systems, some celestial wonders are less frequent and less predictable than the daily motions of the Sun, the Moon, and the stars. Eclipses and the aurora borealis often were held in awe by premodern peoples. When a culture lacks the ability to predict or explain these phenomena, its people are more likely to feel a sense of fear or wonder in the presence of such events.1

A solar eclipse occurs at new moon and is seen over a limited area, whereas a lunar eclipse occurs at full moon and is generally visible over a much larger region. Usually there are two pairs of lunar and solar eclipses each year. Although eclipses are totally predictable, it takes many years of careful observation and record keeping to identify the 18-year-and-11.3-day saros eclipse cycle. It may take a generation or more to identify the full 54-year cycle. The nineteenth-century Lakota did not know this eclipse cycle.

Images of both partial and total eclipses, while not uncommon, do not appear in all nineteenth-century Lakota winter counts. This may be due to more pressing matters on the minds of the keepers of the counts or to cloud cover at the time of some of the eclipses. Most likely the Lakota, lacking the instruments to peer directly at the Sun, made lesser note of partial eclipses when only a small fraction of the Sun’s disk was covered. Nonetheless, some eclipses were noted in the winter counts. More importantly, white observers who were present recorded the Lakota’s reactions to the eclipses…. 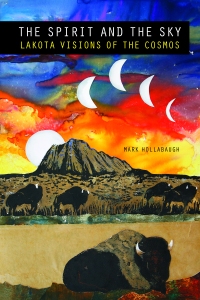 There was a solar eclipse on 1 January 1889. The path of totality traversed northwestern Wyoming, southeastern Montana, and northwest North Dakota. The eclipse maximum at Williston, North Dakota, was at 3:07 p.m. Mountain Time. Observers at Pine Ridge would not have seen this as a total solar eclipse. Even the partial phase would have been unremarkable and perhaps not even noted unless someone with an almanac had mentioned the occurrence. It is possible the keeper of the Short Man count heard about this eclipse but did not see it personally.9

Fortunately the winter count data for solar eclipses is more robust… One event in western history may have a relationship to a solar eclipse in 1888 recorded on the Short Man and High Dog Winter Counts. Roberta Carkeek Cheney indicates that Lakota medicine man Kills Two connected the 1869 eclipse and the 1888 eclipse to Wovoka’s establishment of the Ghost Dance that ultimately led to the Wounded Knee massacre.21

1870 The winter the sun eclipsed.
During this winter, a Paiute shaman, named Tavibo, had a vision and prophesied to his Nevada tribe the end of the world and sure destruction of the hated white aggressors. The earth would be reborn and dead Indians would return to help the living ones establish an Indian paradise on earth. Using another eclipse of the sun (1888) and his foreknowledge of it from the white man almanac, Tavibo’s son, Wovoka, pointed to the great sign from the Heavens to stir his tribe into action. The frenzied Ghost Dance that developed and spread to the other tribes reached the Sioux Nation, and was later to trigger the Sioux Uprising of 1890 [Wounded Knee].22

Did the Lakota see meaning in the occurrence of an eclipse? In the following explanation from Wallis, the Wahpeton Dakota said an eclipse was a warning to prepare for some calamity.

An eclipse of the sun, some say, betokens the approach of the end of the world; some say it means war soon in some part of the world. After one eclipse, news came that there was war in Mexico and soon, after another eclipse, came news of the great European War [World War I]. The only explanation given of eclipses is that the sun and moon being friendly toward the Dakota give them this warning to prepare them for the catastrophe. In case the sun does not exhibit the warning sign, the moon will show it, eclipses of the moon meaning the same as those of the sun.23

Whether eclipses were an omen of bad times or a sign of powerful medicine, the Lakota saw them, remembered them in winter counts, and related them to other events. More importantly, the Lakota’s interest in the Sun was more than astronomical—the Sun is the central astronomical body in their most important ceremony, the Sun Dance.

Solar and lunar eclipses became the subjects of legend and even the icons for an entire year in a winter count. The aurora borealis, dancing like ghosts on the northern horizon, filled the Lakota with awe. The phenomena of eclipses and the aurora borealis caught the attention of the Lakota and still intrigue us today. Rather than cowering in fear of these celestial displays, they faced them with ritual, linking the sky to life on earth. Somewhat predictable, yet always spectacular, these events are worthy of wonder. The extraordinary is central to the Lakota cosmos.

1. Although today we can predict eclipse events far into the future, and daily monitoring of the Sun’s activity permits alerts to intense solar flare activity that can cause aurora, these celestial phenomena still catch the modern public’s attention.

8. Howard, “Dakota Winter Counts,” 402. It should be noted the Swift Dog and High Dog counts should closely agree because they are thought to have been made by the same person.

9. See NASA’s online resource for a map showing the eclipse path. The eclipse timing for Williston was obtained from Starry Night.