The following is a post from Joeth Zucco, Senior Project Editor at UNP. The first ghost run details may be found here.

Just as darkness was settling upon Lincoln, Dawn, Erin, and I headed out for our second annual ghost run, checking out the sites that Alan Boye writes about in his Guide to the Ghosts of Lincoln. My dog, Blue, joined us—and protected us as necessary.

The wind was howling viciously and blowing fallen leaves in our path by the time we ran north on Twentieth Street, heading toward the intersection with Washington. In Boye’s story, “A Cold Sidewalk,” a young man was killed in a drive-by shooting more than a hundred years ago. A murder that’s never been solved. We stood on the southeast corner, where he paused. We were surrounded by the same “dark sandstone castles” and “stately mansions,” and “warm family houses.” Cars sped by and sirens whined to the north. Boye writes about approaching the intersection from the south, “and you will agree that something urges you to take a different route. Some omen of the past seems to push you away from the haunted corner.” 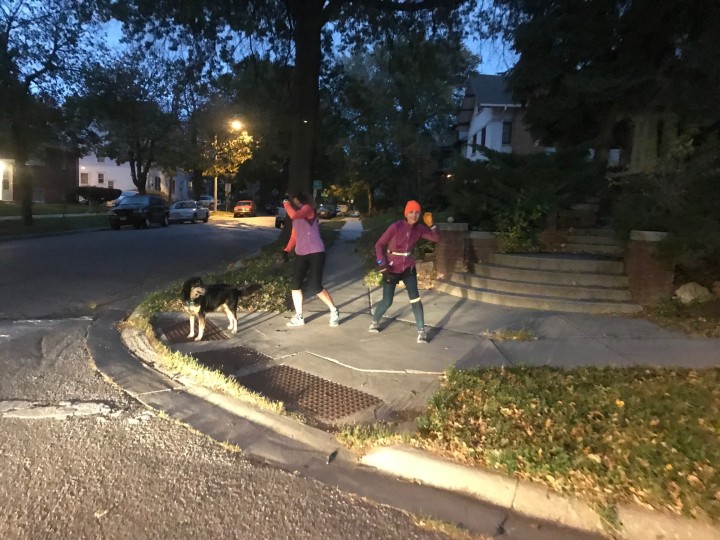 Maybe the wind was the omen that pushed us. So we continued up Twentieth Street and jogged over to Twenty-First Street near Lincoln High School, which I’m sure has a ghost story or two floating through its halls.

Our next stop was Twenty-Seventh and M Streets, the vicinity for Boye’s story “Grandpa.” Twenty-Seventh Street cuts through the entire length of Lincoln. It’s busy and noisy, and as we stood on the east side of the street, we tried to determine which house Grandpa and the Pans occupied. That’s the thing about Boye’s stories, he gives you just enough information to set your imagination running. And so we ran.

Between candy and decorations and costumes, Americans will spend more than $8 billion on Halloween this year. And Lincoln is no exception—orange and purple lights, cobwebs, ghosts, and pumpkins decorated many front porches and yards as we made our way south to Antelope Park to find “A Woman in the Fields: The Spirit at Antelope Park.”

We stepped off the bike path and made our way into the darkness and the trees. According to the story, Marty and Gay “walked across an open space toward Capital Parkway. Just before they reached the edge of the golf course, Gay fell and landed face-first on the hard ground.” She had stepped in a hole, but when Marty looked around, he couldn’t find a hole. I’m not sure if we found it, but what we did find—and what Blue inspected—was a filled hole on the putting green! Could this be the hole that Gay tripped on?

We wandered up to a sidewalk and behind the caretaker’s house. As we turned our lights back on and were ready to continue our run, a dark figure with a flowing cape approached us. It quietly walked up the hill toward us. It was silent, steady, and tall and seemed to have appeared out of nowhere. We all saw her. But unlike the story, she was not running, and her feet did touch the ground. She looked toward us and walked right up to us, and I was literally freaking out!

She was dressed in red and had a small cape. She carried a baby doll. And she was waiting to haunt the woods we had come from as part of a haunted bike ride! We exchanged stories and laughed (in relief that she was a real person and not a spirit!). As we headed toward the winding road that led to South Street, we heard voices and saw a parade of lights and families heading to Boo at the Zoo on the other side of the park.

Our final stop on our ghost run was Twenty-Sixth and Sumner Streets, featured in “The Sailor.” According to the story, the houses in this area became haunted one by one in the 1960s. The Sailor would appear out a window, in a hallway, out of the corner of an eye. Fortunately for us, after our earlier scare, the Sailor left us alone. For now.