A reception and book signing for the new educational comic Carnival of Contagion, the latest entry in the World of Viruses series, will be held tomorrow from 5:00 to 7:00 p.m. on the second floor of Love Library South at the University of Nebraska–Lincoln.

Veteran comics writer and artist Bob Hall will sign copies at the free public event. Hall partnered with Judy Diamond, professor and curator of informal science education at the University of Nebraska State Museum and World of Viruses co-author; John West, research associate professor in the Nebraska Center for Virology; and Carl Zimmer, award-winning science journalist and columnist at the New York Times, to create the story about measles—one of the world’s deadliest viruses.

Carnival of Contagion (Nebraska, 2017) combines fantasy with measles facts and history through the tale of a group of young adults entering a viral world run by a mysterious and malevolent carnival barker.

A temporary exhibition on the second floor of Love Library South will also celebrate the comic’s release through Jan. 5. The exhibition features enlarged poster prints of each page, along with materials illustrating how the comic was created.

“World of Viruses” is funded by a grant from the National Institute of Health’s Science Education Partnership program as part of the Biology of Human Project, a collaboration of the NU State Museum, the Nebraska Center for Virology and the Department of Sociology at Nebraska. The exhibition and book signing are in partnership with the Office of Research and Economic Development at Nebraska. 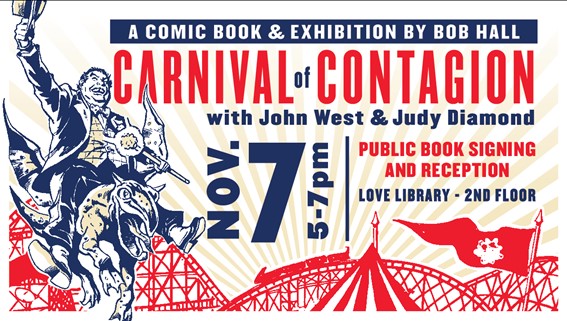