The following is by Amanda Ottaway, author of The Rebounders: A Division I Basketball Journey (March 2018). Ottaway is a journalist in New York City. She attended Davidson College on a full athletic scholarship and majored in English. Her work has appeared in the Nation magazine, the Washington Post, and the Pittsburgh Post-Gazette, among other periodicals. Follow her on Twitter @amandaottaway.

Before The Rebounders, There Was “After the Last Buzzer”

In mid-February 2016, I packed my suitcase for a month and a half on the road during the tangle of climates early spring throws across the United States. I filled up my water bottle and the gas tank. I threw a mattress pad, sleeping bag and pillow in the trunk of my beloved Honda Accord, Baloo. I needed to meet my teammate Mel Giegerich in Baltimore before the blizzard hit.

Baltimore would be the first stop on a five-week journey around the eastern half of the country—from my starting point in Pennsylvania south to Maryland, Virginia, North Carolina, Georgia; west to Alabama, Louisiana and Texas; then north through Nebraska and Minnesota before heading back east for stops in Ohio and Massachusetts. The mission: to meet with my Division I college basketball teammates and see their adult lives, their houses and workplaces and partners and children, to show what happens for competitive athletes “After the Last Buzzer.” It was research for my book The Rebounders: A Division I Basketball Journey, which details our experiences coming of age at Davidson College as women who loved a sport.

If I kept a good pace I could get to Baltimore before the storm hit. I folded myself into the driver’s seat, adjusted my hoodie, pushed my glasses up my nose, turned the key in the ignition.

Baloo just grunted at me. I tried again. The car did not start.

I had a small breakdown myself. Then I ran through the thickening snow to a neighbor’s house, banged on the door and recruited her to jump my car. About two hours, some girl power, and one new battery later, I finally hit the road.

Thankfully that rough start was the worst trouble I had the whole trip. And really, how could a trip like this—to interview over a dozen of my best friends about our college days—be bad? 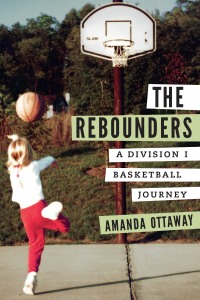 Over the next five weeks I drove nearly six thousand miles. I ate salmon cooked by a teammate’s husband in North Carolina, corn dogs and Go-Gurt with another’s two-year-old daughter in Nebraska, and homemade Indian food in Texas. I accidentally learned all the words to the Justin Bieber song that came on the radio in every state and to my horror found that I enjoyed it. I picked up a $188 speeding ticket in Oklahoma. And at each stop, my teammates and I talked through what became The Rebounders, a project that belongs to all of us. We reminisced about college, acknowledged the perspective we had gained on the experience, and discussed what it’s like to be women these days on the court and in the office.

“I feel like there’s always that underlying thing of feeling like you have to prove yourself being a female, no matter if you’re an athlete or not,” Mel told me after I had parked Baloo on her street and we plopped on her couch as the snow fell outside. She said she feels like sometimes people assume she’s not smart because she was an athlete. At the time she worked a research associate at the Lieber Institute for Brain Development.

“And it’s not like they necessarily do it on purpose,” she added, “but I think those stereotypes are in the back of their minds.” But Mel’s goal coming in as a Division I athlete was never to play in the WNBA. It was to get college paid for so she could go to graduate school “and get a degree and become really successful. That’s what basketball was to me.”

Mel’s words set the tone for the trip. At almost every stop my teammates and I talked through the tremendous role our favorite sport had played in shaping our lives. We all loved it, but we had also all used it to get somewhere—many of us to get a free education so we could nab a good job or pay for graduate school. The best part of the “After the Last Buzzer” trip was seeing how these women are thriving after hoops. That new car battery was worth every penny.

One thought on “After the Last Buzzer”