Much of the world came to a halt during the Great War, but baseball marched on. On July 4, 1918, the US Army and US Navy paused their fighting to celebrate Independence Day and play nine innings of America’s much-beloved pastime at Stamford Bridge, Chelsea.

The game was a breath of fresh air during a tumultuous time. Even King George V and a young Winston Churchill were in attendance—and reportedly had a delightful time. Jim Leeke tells the full story in his book, Nine Innings for the King (McFarland & Co., 2015). 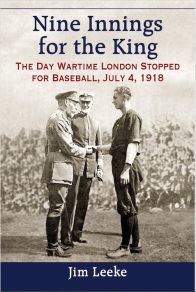 Leeke is also co-founder of the Anglo-American Baseball Project, which will celebrate the 100th anniversary of the Stamford “baseball match” by recreating the event with US and UK teams today at historic Cardines Field in Newport, Rhode Island. Descendants of the WWI players and other special guests will participate in ceremonies before the start of the Newport Gulls-Danbury Westerners game. Historical displays and replica scorecards from the 1918 game will be on display. First pitch is 6:35 p.m. EST, so arrive early for the pregame activities. Follow Jim Leeke on Twitter for updates.

Though the July 4 match captured the attention of Londoners and Americans alike, it was by no means the only game the Anglo-American Baseball League put on during World War I. In his book, From the Dugouts to the Trenches: Baseball During the Great War (Nebraska, 2017), Leeke illuminates this influential and fascinating period in baseball history, as nineteen months of upheaval and turmoil changed the sport—and the world—forever. 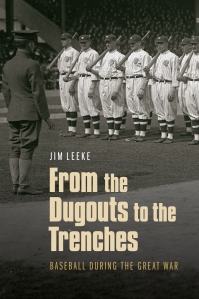 If you aren’t in Newport for today’s match, be sure to pick up both of Leeke’s books once the firework smoke clears.