The following is an excerpt from The Kid and Me: A Novel (August 2018) by Frederick Turner. Narrated by George Coe, an aged veteran of New Mexico’s Lincoln County War, The Kid and Me tells what it felt like to ride alongside Billy the Kid, whom Coe both admired and greatly feared.

Often enough I tend to skip the preliminaries and go straight to the Kid and the war because I know goddamn well that’s all folks is interested in, and some ain’t even interested in the war. What they want is the Kid, the Kid, and I guess you can’t blame them with all the stuff that’s been put out on him the last fifty years or whatever it may be, and even that ain’t really the half of it: there’s still folks around here has their own Kid stories never been heard by strangers, ones passed down, some of ’em corkers, too, all about how the Kid and Jesse Evans raced their horses forty miles through broken country at night to spring a pardner from the hoosegow, and what Tom O’Folliard called Garrett after Pat shot him in the chest. The Mex people have their own stories and songs, too, more of them than any white man has heard. I used to hear some of these long ago, but now I don’t go amongst them people as I once did. Stick pretty close to home, down to the stand, selling my fruit and my pictures.

Still, a good deal of this Kid stuff was picked up by a feller name of Wally Burns who come down here—oh, in the twenties, I’d say—, and he put it into a book which I understand got him considerable trouble from folks who said it wasn’t true. Well, what is true? You really want to walk into a dance hall where some feller is up there singing a song he heard from his own pa, and it goes, ‘I’ll sing you a true song of Billy the Kid,’ and afterwards you go up to him and say, ‘Hey, there, what you sung about Billy the Kid—that ain’t true.’ You really want to do that? There might be better ways of getting a pool stick through your windpipe, but that’ll do for me. I say there’s different kinds of truth; not any old number of truths, mind you: the Kid got planted by Pat Garrett back in July of eighteen-eighty-one, and he’s deader’n hell. That’s the truth. But, far as the Kid’s life is concerned, what folks thought about him then, what some of the things was he might have done, those are different things. 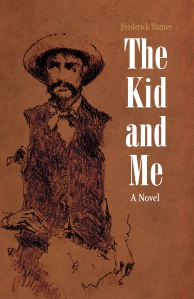 I know what I thought about him, and I have had many and many a thought about him down the years—way too many, it sometimes seems. But if your path crossed his, you wouldn’t forget him, so when a feller like yourself asks about him you don’t say, ‘The Kid? What Kid?’ Unless you got a reason. Also, I know the things I seen him do. There are other things I didn’t see but heard about from them that was there—fellers I trust—, like Garrett who was a neighbor here for a spell, over on Eagle Creek. I spent a few days with him once when he was trying to put together an irrigation scheme, and he talked a good deal about the Kid, once I primed him with a good-sized glass of whiskey. My cousin Frank knew him well as I did, from the winter he bunked here—right over there where that low house is—and then when we was holed up a while over to San Patricio during the war. Then, way after the war was over, when the Kid was long dead and had become a hero, you might say, one night when Frank and me had got together to talk some business, why, we ended up talking about the Kid instead. Frank said what he recollected and I done the same. Before that we didn’t see no point in raking up old happenings; safer to forget them. But then, all this other stuff comes along in between, including moving pictures and whatnot, and so then you get to wondering, What in hell did happen, anyway? But neither of us and not even the both of us put together knows the whole truth. Nobody does. Not even Garrett, who hunted the Kid down and killed him. So, if you come here for that, pardner, you come to the wrong place. Whatever the whole truth about him is, it’s somewheres back there in them murdering days when he was alive.