On a cold, rainy dawn in late November 1872, Lieutenant Frazier Boutelle and a Modoc Indian nicknamed Scarface Charley leveled firearms at each other. Their duel triggered a war that capped a decades-long genocidal attack that was emblematic of the United States’ conquest of Native America’s peoples and lands. Robert Aquinas McNally tells the wrenching story of the Modoc War of 1872–73, one of the nation’s costliest campaigns against North American Indigenous peoples, in which the army placed nearly one thousand soldiers in the field against some fifty-five Modoc fighters.

Although little known today, the Modoc War dominated national headlines for an entire year. Fought in south-central Oregon and northeastern California, the war settled into a siege in the desolate Lava Beds and climaxed the decades-long effort to dispossess and destroy the Modocs. 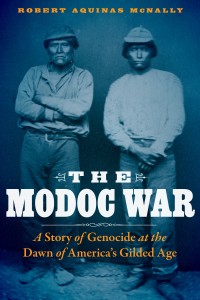 The war did not end with the last shot fired, however. For the first and only time in U.S. history, Native fighters were tried and hanged for war crimes. The surviving Modocs were packed into cattle cars and shipped from Fort Klamath to the corrupt, disease-ridden Quapaw reservation in Oklahoma, where they found peace even more lethal than war.

The Modoc War tells the forgotten story of a violent and bloody Gilded Age campaign at a time when the federal government boasted officially of a “peace policy” toward Indigenous nations. This compelling history illuminates a dark corner in our country’s past.

“McNally is a strong storyteller with a conversational style and an eye for telling details. . . . This honest accounting of the cruelty, corruption, and savagery of the settlers—who believed their actions were smiled upon by God—takes a step forward in correcting a sanitized and muffled history.”—Publishers Weekly

“The Modoc War is a devastating history of defiant indigenous resistance during the Gilded Age of the nineteenth century. McNally’s fast-paced, blow-by-blow account chronicles the daring actions of Modoc freedom fighters, treacherous U.S. soldiers, genocidal American settlers, and hubristic military leaders that scarred the West during the “Indian Wars” of the post–Civil War era. But this is more than simply a long-overdue accounting of broken treaties, broken promises, and tragic removal in California. McNally also shines a mirror at us, demanding a reckoning for the demographic and cultural genocide that occurred in the Klamath Basin and across the American West.”—Natale A. Zappia, California History

Listed as True West‘s “Best of the West”

🏆 Congratulations to @ramcnally whose THE MODOC WAR: A Story of Genocide at the Dawn of America's Gilded Age (@UnivNebPress) won the Californiana Award at the @cwclub's California Book Awards. You can listen to Robert's @NewBooksNatAm interview 👇https://t.co/2WtAsSDzSg pic.twitter.com/vyQdHaipnb

The last time I tumbled like this into a book about Native American history, in all its untold beauties and unspeakable suffering, was in ‘Bury My Heart at Wounded Knee’. In ‘The Modoc War’ by @ramcnally, I’ve tumbled again. It’s a classic – read it! pic.twitter.com/XMqYsSePuL

Just finished the excellent The Modoc War by @ramcnally a nonfiction book that chronicles the first and only time in U.S. history when Native fighters were tried and hanged for war crimes. A tragedy that needs to be remembered.

A word from Robert Aquinas McNally: 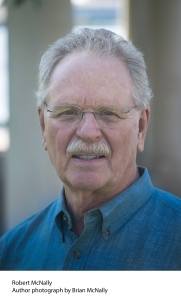 Writers know: your book is your child. So when the author’s copies arrive, the work moves from shadowy shape on ultrasound to this breathing being you cradle close. That was the lead-off Modoc War miracle.

These connections brought a new reality to William Faulkner’s dictum that “The past is never dead. It isn’t even past.” In truth, The Modoc War didn’t end in 1873 or on my book’s last page. It continues even now, through the Americans whose lives link back to it and through the unfinished pursuit of racial equality and social justice that lies at the heart of our democratic experiment. That struggle continues.

And so do I. A new project, on decolonizing John Muir’s wilderness, beckons. Watch this space.