Since 2014 UNP has been publishing, often for the first time in English, works of classic and contemporary poetry from African writers with the African Poetry Book Fund. So far, sixteen books have been published with two new volumes coming out in March, one poet is publishing her first volume with UNP and the other publishing her second collection with the Press. 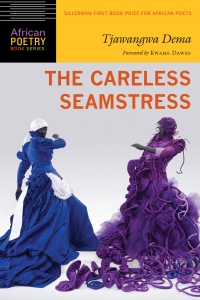 Tjawangwa Dema’s The Careless Seamstress (March 2019) was the winner of the Sillerman First Book Prize for African Poets and on the intrinsically political personal lives of women, often through imagery of domestic labor and survival.

Poems like “Atropos” and the titular entry explore the expectations of women through the metaphor of sewing and stitching, creating something whole or making something damaged complete again. Others, such as “Women Like You” focus less on fixing the flaws than meting out some measure of justice in a world that often rejects just that for woman.

Your Body is War (March 2019) by Mahtem Shifferaw similarly focuses on the psychology of women’s’ bodies and the challenges of existing in the face of grief and trauma. Poems like “The Suicide Chamber” and “Like a Lover’s Quarrel” place a critical eye on society’s tendency to force disembodiment on women and the struggle to embrace self acceptance within one’s self. As the volume moves towards its end, a new form of radical self-acceptance is embraced in offerings such as “At the Mad Man’s,” “The Body Book” and “Conversations with Self.”

To find out more about the series, including the latest poets and upcoming books, visit the series’ page here.