The following is an excerpt from Bodies Built for Game edited by Natalie Diaz with associate editor Hannah Ensor (October 2019).

From the introduction by Natalie Diaz:

Before each of my basketball games, from rec league to high school, my mother told me, “Knock ’em dead,” as I walked out the door. Even after I moved across the country to Virginia to play Division I basketball, she ended our pregame phone calls with the same phrase, “Knock ’em dead.” She never said, “Good luck.”

I didn’t learn how to read poetry, how to let poetry into my body in a physical and emotional way, until my basketball career was over. It makes sense if I consider how much basketball needed and took of my body—it is a sensual and intuitive game, a relationship of movement and space, momentum, timing, a defiance of the body’s socialized limitations, a corporeal inquiry that shapes the imagination. The game itself exists within and also creates the conditions of futurity. Yes, basketball is a game of the future! On defense you must think two steps ahead of the ball or your opponent, toward what has not yet happened but could. On offense you must envision every opportunity that might occur and then risk entering into that unknown, taking what the game offers you, or demanding it give you something else, conjuring a pass or a move that didn’t exist until you arrived there in its perfect moment, prepared and lucky.

The intense physicality of both basketball and poetry has at times made me ecstatic. A good shot is called “touch.” On a rebound, you locate your player and “put a body on her.” A poem too can make you realize your body in a way that doesn’t require you to break it or to perform the stories and fears America has always projected onto women and men of color—though every page is white, the language of poetry itself is made of dark figures, inked bodies of sound, building, aching, reaching out, all up and down the page.

Though I was early to basketball and late to writing, the two have a long relationship, an entanglement that is my lucky inheritance—
Poet and rapper Tupac Shakur starred in the movies Above the Rim and Poetic Justice.

In his own gesture of justice—justice for his body and that of other straight, white men— poet Charles Bukowski wrote a letter to the editor of the New York Quarterly, complaining, “In our age, the only safe target for the writer is the white heterosexual male.” He continued, “Nobody protests. Not even the white heterosexual male. He’s used to it. Also, things like ‘White men can’t dance,’ ‘White men can’t jump,’ ‘White men have no sense of rhythm,’ etc.” He wrote that letter in 1992, the same year the movie White Men Can’t Jump premiered. Prior to the movie and Bukowski’s self-proclaimed victimhood, we always knew the statement was true—white men have never needed to dance, or jump, or have rhythm to be afforded the privileges they offer to and accept from other white men.

Kareem Abdul-Jabbar spent a season as the assistant varsity basketball coach of the Alchesay Falcons. Alchesay High School is located in Whiteriver, Arizona, on White Mountain Apache or N’dee land, “N’dee” meaning “the people.” What originally brought Abdul- Jabbar to N’dee territory was research for a book about a black cavalry regiment nicknamed Buffalo Soldiers who had been stationed at Fort Apache. He later wrote a book about his experience, A Season on the Reservation: My Soujourn with the White Mountain Apache. 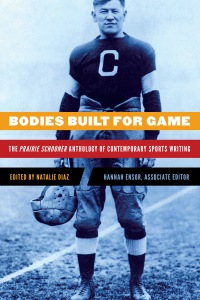 Poet Jim Carroll was a high school basketball star at Trinity in Manhattan. His experiences there, including his addiction to heroin, led to his writing The Basketball Diaries, a book later adapted to film.

John Edgar Wideman, author of the memoir Hoop Roots, was All–Ivy League forward at the University of Pennsylvania. I played against his daughter, Jamila Wideman, in the 1997 Women’s NCAA Final Four. She was Stanford’s point guard, and I was a 1-2 guard for Old Dominion—we beat them in the semifinals. Though I didn’t meet John Edgar Wideman in person until twenty years after that game when we judged a writing prize together, he had been in the stands watching his daughter all those years ago, which meant, in a way, he and I had met before. Before either of those meetings, I met Wideman in a different way and with much more at stake—I met him in the many pages he wrote about brothers, about his brother, and in my mind about my own brother. The way he held his brother on the page, a brother some might call “bad,” gave me a place to love and hold my own bad brother. It was a tough lesson—I can sometimes love my brother best on the page, in a poem, better than I can manage to love him in real life.

Spike Lee knows basketball is holy—he created Jesus Shuttlesworth in the movie He Got Game, played by real-life baller Ray Allen. It was Jesus Shuttlesworth who said, “Basketball is like poetry in motion, cross the guy to the left, take him back to the right, he’s fallin’ back, then just ‘J’ right in his face. Then you look at him and say, ‘What?’”

My mother had eleven kids. If we’d all survived, we’d have been a soccer team. We are nine now, enough for a baseball team. But in the Southwest fervor of pavement and blacktop, where temperatures can exceed 120 degrees, basketball is currency, is credibility, especially on the rez.

Writer and philosopher Albert Camus, no stranger to sports, was on a soccer team—goal keeper for the Racing Universitaire Algerios juniors. He said, “After many years during which I saw many things, what I know most surely about morality and the duty of man I owe to sport and learned it in the RUA.”

I lived years on a court, in the driveway, at a park, in a gym, on a bus or plane to or from a game, drilling, sprinting, stretching, watching film, attached to an electrical stim machine, in an ice bath, in a season—preseason, in-season, postseason, off-season, next season. My brain, my muscles, my emotions have been shaped by my life as an athlete, in the way each triggers or smooths, attacks or defends. It’s hard to comprehend “sport” as “game” when you’ve been built by its rules, triumphs, failures, and wagers, as I’ve been built. I am the game’s machine. I am its apparatus as much as it is mine.