The High Plains Book Awards were established to recognize regional literary works which examine and reflect life on the High Plains, including the states of Montana, North Dakota, South Dakota, Wyoming, Nebraska, Colorado and Kansas, as well as a handful of Canadian Providences. 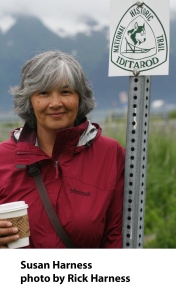 Harness’ memoir Bitterroot traces her journey to understand the complexities and struggles of being an American Indian child adopted by a white couple and living in the rural American West. Growing up Harness found herself caught between two worlds, neither of which she felt she belonged in. Battling constant questions of stereotypes and a sense of nonbelonging, Harness slowly develops her own meaning of family and learns the importance of forgiveness and self-acceptance.

“Harness is unflinching in describing her struggles along the way,” writes Susan Olp in a feature for the Billings Gazette. “Since the book’s publication, she has received positive responses from people grateful to have an accurate picture of trans-racial adoption.”

The following is an excerpt from Bitterroot: A Salish memoir of Transracial Adoption. 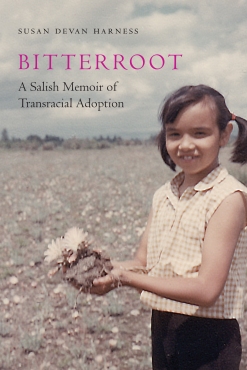 It is September 1979, and as a newcomer to the university, I’ve been assigned an adviser in the Economics Department, a balding professor who rises from his chair as I walk in the door. We shake hands. Being a mathphobe, this department makes me anxious, and the perspiration begins. He is a serious, forty-something man who wears glasses as well as a touch of arrogance.

After our introductions he motions me to take the seat opposite him. My transcript file lies unopened on his desk. Seeing the direction of my gaze, he explains it away, saying, “I never like looking at those things. People just talking to me helps me understand their goals so much better.” He leans back in his chair, at ease, and crosses his fingers over his stomach. “So, what’s your major?”

“I’m interested in a lot of things. I love writing; I like anthropology; I enjoy science and music.”

“Hmmm,” he says, nodding; he studies a spot on the wall to the left of my head. “That’s pretty broad. Is there any particular direction you’re leaning?”

“Toward science. The problem is,” I confide, my voice dropping, “whatever I choose can’t have a lot of math in it. I can’t do math.”

“Why is that?” The confusion on his face is clear.

I shrug; my cheeks warming in embarrassment. I have no idea why I can’t do math. I have no idea why I could get As and Bs in all my classes in high school and get Ds in math. I have no idea why I could get the concepts of chemistry and physics but be unable to prove my understanding of them by running the numbers. As a junior I was encouraged by my chemistry teacher to take physics my senior year. In early November, in the midst of Mom’s bipolarities, the physics teacher laid it out: “If you quit now, before the end of the semester, I can guarantee you a D. If you stay, I can’t guarantee you’ll pass at all, and I would hate to see you fail so close to graduation.”

I have no idea why no one thought to explore the disparities in my abilities, or why Mom would look at those grades year after year after year and not do anything. Years from now when I tell her this, she will look at me with a certain amount of guilt, and she will say, “Your home life was so chaotic, I didn’t think you needed additional pressure to get through your day. And by the time I realized how important it was and enrolled you in remedial math, you joined the swimming team instead.”

“Mom,” I will say, “I was a senior in high school! There was no way I was going to go to dumb math!”

The economics professor looks at me and lays the unopened file aside. “I’ll be honest. I don’t think college is a good place for you. With your skills I think you should check out the vo-tech program. I really do.” He says this, not with sincerity, but with the sound of proclamation.

I thank him for his time and leave, thinking, You son of a bitch, you watch me graduate with a degree.