The following was originally published in the University of Nebraska Press Fall 2019 Newsletter, i.e.

Lise Funderburg is a writer, editor, and a lecturer in creative writing at the University of Pennsylvania. Funderburg’s collection of oral histories, Black, White, Other: Biracial Americans Talk about Race and Identity, has become a core text in the study of American multiracial identity in college courses around the world. Her latest book is Pig Candy: Taking My Father South, Taking My Father Home. Her work has appeared in the New York Times, the Washington Post, the Philadelphia Inquirer, National Geographic, Salon and the Nation. For more with Lise Funderburg, check out another interview titled The Most Interesting Dinner Party You’d Ever Attend.

In some way or another, most of us come to realize that we are, more or less
and for better or worse, chips off the parental block. That fact alone is not
what prompted me to commission the essays that fill this book. Instead I
was intrigued by what came after the sidewalk-borne shock of recognition:
the curiosity and amusement and compassion and insight, palpable evidence that relationships continue to evolve as we make our way through life. . . . I decided to ask people—interesting people, people who think deeply and write beautifully and come at life from multiple directions—to consider that space between the apple and the tree, to make meaning of it.”
—Lise Funderburg, in the introduction to Apple, Tree

UNP:
Your introduction gives readers this collection’s origin story: one day, suddenly struck by your unthinking act of tossing a coffee cup in a sidewalk trash can, you contemplate a previously unexamined behavior of yours and trace it to your father. “Look at that, I said to myself, I just broke a rule I didn’t know I followed.” This epiphany and the reflections it prompts gives you the idea for Apple, Tree.

LF:
I was stunned to discover that deeply embedded proscription against drinking in
public. The more I thought about it, given all I had learned as an adult about my father’s childhood under the strictures of Jim Crow, the more I understood my father’s knee-jerk responses to the world, responses that had previously been mystifying, given how different my world was from his. Reflecting on that one sidewalk moment prompted me to see my father’s parenting style in a new light.

Then there’s a second part to the book’s origin story, beyond that moment of throwing out the iced coffee, which is that I am, constitutionally speaking, allergic to over-sentimentalization. I’m deeply interested in universal human experiences, but in a kind of anti-Hallmark way that embraces shadow and light, and which allows irreducible differences to coexist with connection.

The idea for this book merged my personal experience with a driving curiosity about how deeply similar moments can reverberate for people. I wanted to see how a bunch of great writers and thinkers would weigh in on the topic, expecting that they would respond with wisdom, art, and delight—which they did.

UNP:
Though coming up with a great theme—especially one with a fantastic title—can be difficult, editors of compiled volumes often get less credit and respect than they should. Many people don’t understand how much work it is to put together an edited volume, but more than that, most don’t realize that such work includes intellectual labor and requires creative vision.

LF:
Between the first vision of this work and its result was about a year and a half of gloriously dwelling in the intellectual labor and creative vision you mention. Because I was determined to commission all original work, I spent a lot of time refining the articulation of the brief I presented to writers. I also felt it was important to strike a balance between cohesion and variation in the works included. Who would want to read a collection of essays that all had the same tone or point of view? Conversely, what would be the point of a random assortment that only coincidentally mentioned parents?

On top of what I was asking writers to do was the question of who I was asking. I had my sphere of personal connections: writers I’d edited from my years at magazines, writers I’d met through panels and conferences, and of course, dear friends who were writers. I also asked writers I didn’t know whose work I loved, and I asked writers I admire for suggestions of writers whose work was new to me. I tried to conceptualize a meaningful, dimensional notion of diversity in recruiting my contributors, which kept reminding me of the old Battleship board game (my first introduction to holding two ideas in my head at one time). I approached this goal of diversity multiple ways, one of which was to intentionally include essayists with varied demographics, but then not require them to include those aspects of their identities in their works. One of my contributors once referred to such a requirement as tantamount to asking writers to “perform a burlesque” of their identities. I was going for a prismatic meditation, not a sideshow.

This intentionally anti-algorithmic hodgepodge of contributors asks a certain pliancy of readers, a willingness to approach the overall work without requiring a common perspective from piece to piece. Will audiences find it disconcerting or invigorating? The latter, I hope.

UNP:
Would you agree that the editor’s role is undervalued, somewhat dismissed as a collator of other people’s work?

LF:
Now I have the Rodney Dangerfield line, “I get no respect,” stuck in my head.

Actually, I’ve felt tremendously valued by my contributors. One thing I promised was careful and respectful editorial attention, which I can confidently attest to having given all twenty-five of them. As a writer, I know that this matters.

So yes, I’m definitely backgrounded in Apple, Tree, but that makes sense to me. I’m present in the introduction, a little, and I’m a low-level hum underneath all of it, but this project was about a conversation with multiple voices, and that’s how it should come across to readers.

An upside of being in the background is that it’s felt so much easier to promote this book than one of just my work. I suffer, as many writers do, from being marketing-challenged when it comes to my own writing, but I have no problem touting the great work of other people. I have found first-serial homes for more than half the essays in Apple, Tree, and I’m pretty zealous in contributing to the promotional side of the project.

UNP:
This isn’t your first time at the helm of a collection, so you either enjoy the gig or are a glutton for punishment. How did your experience with Black, White, Other come into play?

LF:
It’s funny that I never thought of Black, White, Other as a collection before now. Of course it is, in a way, but as an oral history it’s a distinct form and asks for a different kind of editorial intervention. That was more of a social history and ethnography project. A smaller, radio version of it had been my master’s thesis in journalism school, and the book deal happened right on the heels of that. What did carry over, I will say, was a profound appreciation for the organizing power of a spreadsheet.

UNP:
What were the highlights of editing Apple, Tree and what were some things that proved to be difficult?

LF:
Editing has an aspect of midwifery about it, particularly in how significantly you can support and alter a writer’s experience and in how amazing it feels to be the wingman on someone else’s creative endeavor. I felt fortunate to witness all of those creative processes.

As for challenges, there were moments—especially with the writers I’d never met and whose body of work leaves me awestruck—that I had to fight off my own self-created intimidation. Who am I to question that word choice, that narrative trajectory, that sentence structure? But not asking those questions would have done everyone a disservice. So I’d give myself a talking-to and then just go do my job.

UNP:
Your introduction includes contributor John Freeman’s point that when writing about family, “Love is in clarity, not sentiment.” Can you talk a bit about what that means to you as a writer of creative nonfiction?

LF:
To me, a writer expresses love for a subject by being true to it—by seeing it as clearly as possible, from as many angles as possible, and then figuring out where it fits in the constellation of the human experience.

When I read work that’s treacly, it hits a false note. Life is never so simple, so tidy. If we paint portraits of loved ones that leave out blemishes and misdeeds in an effort to protect their reputations, haven’t we, on some level, denied them the dignity of their wholeness? The impetus for such distortions might be loving—perhaps—but I think it’s actually a greater, more profound rendering of love if a portrait encompasses all of who they are. 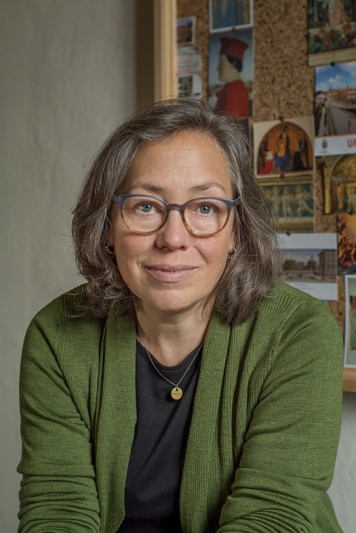 Complete list of contributors in Apple, Tree: Writers on Their Parents: