Jim Harrison—novelist and poet, hunter and outdoorsman, lover of good food and good wine—passed away this Saturday at 78. Called “Master of the novella” in the New York Times obituary, Harrison leaves behind twenty-one works of fiction, most memorably Legends of the Fall (which was made into a movie in 1994), in addition to a memoir, fourteen books of poetry, two of essays, even a children’s book.

In 2009, Gregg Orr and Beef Torrey compiled the prolific author’s work in Jim Harrison: A Comprehensive Bibliography, 1964-2008. Harrison wrote the following foreword to this definitive study. 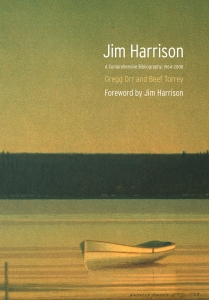 This book helps fulfill my unrequited affair with Nebraska that began on a late August evening in 1954 when I slept out in a pasture near the Platte River. I was hitchhiking back to Michigan from a summer job in Colorado and was plumb tired when I knelt by the river to wash up. I recall that I was hearing a whip-poor-will, fine night music, and watching a group of Hereford cattle upstream. When I awoke at dawn, there was a circle of young Herefords close around me. I’m still the only environmentalist I know who loves cattle, but I grew up with them as my dad was a county ag agent who judged them at fairs. In any event it was the sweetest night you could have by yourself far from home, perhaps misinformed by my idea that one of my high school favorite authors, Willa Cather, might have visited the very spot where I slept.

I suspect that it was this experience that helped bring me back to Nebraska in the mid-1980s when I was taking very long nondirectional car trips to mentally survive my livelihood at the time, which was commuting between northern Michigan and Hollywood. I quickly became and remain obsessed by the Sandhills and ended up actually dreaming my character Dalva sitting on a balcony in Santa Monica, California, planning her return to the Sandhills. On a strictly rational level I needed a somewhat mythological area that educated readers would know existed but with which they would be unfamiliar. Americans tend to be historically naïve, and I wanted to direct their attention to the general area of northwest Nebraska where the last violent collision of two cultures took place.

An old man’s memory bank (I’m sixty-eight) is overfull and is, in fact, uncontainable. When I first looked at the manuscript of this bibliography, it was unsettling indeed. Each of the hundreds of items raised memories, pleasant and unpleasant. What precisely was I doing in Africa, Europe, Russia, and South America in a space of little over a year? Well, I was either writing about these locations or intending to. It was my father who told me that curiosity will carry your life in goodly fashion better than anything else. The French poet Rimbaud wrote about “a child crazed with maps.” That was me, and, when you add the essential factor of coming from a reading family, the seven of us sitting the evening all separately reading, you add a great deal of fuel to the life that ensues. In fact bookishness has occasionally reached the disease level in my life, and only through travel have I been able to liberate myself from books as an addiction. My wife, Linda, used to be amused when I’d travel north to our cabin with many cartons of books for a short week. “Only a carton a day?” she’d ask.

Of course, if I hadn’t spent a good deal of my life on the move, I wouldn’t have written half my novels and novellas. I chafed at my two years in the English Department at Stony Brook University on Long Island not because it was unpleasant but because I’m a claustrophobe and prefer living in remote places. The scholar-novelist Fred Turner wrote a fascinating book, The Spirit of Place, and, despite the media telling us that the media has made the world a more uniform place, each location seems to have its geographic and cultural uniqueness. If I hadn’t  visited Russia in 1972, I certainly wouldn’t have written Letters to Yesenin, and an early foray into northwest Montana gave me Legends of the Fall and a solvency at age forty I had long sought in despair. Revenge and its doomed and brooding atmosphere came from a trip to Mexico, and A Good Day to Die emerged from fishing trips to Key West. Sundog wouldn’t have been possible without visits to Costa Rica, Ecuador, and Brazil. You snoop around, read, talk to people, and generally look things over. Your approach is decidedly not scholarly because you are looking for the feel of the place, its spirit. For instance, Nebraska had meant inestimably more to me because I had read Willa Cather, Wright Morris, and Mari Sandoz. In addition I was lucky enough to meet and come to know Bill and Anne Quigley up in Valentine, John Carter at the Nebraska State Historical Society, who is a living encyclopedia, the noted poet Ted Kooser, Roger and Linda Welsch, and Beef Torrey. It is fascinating to see in the relatively new academic discipline of human geography that we tend to become where we live.

When I tried to answer queries from Gregg Orr for this bibliography, it was, as I’ve inferred, a not altogether pleasant experience. I suspect that in any writer’s life there are things he wished he hadn’t written. I have my own private list, and Gregg Orr has helped me add to it. I’m not gifted in the political arena and tend to rant and rave, and many of the critical pieces I wrote for the New York Times Book Review smack of the young smartass. There’s also the novel Warlock I wrote when I was drinking too much, though some people care for the work. The novelist Thomas McGuane and I used to look at Faulkner’s work and figure out when he was strictly boozed amid his splendor.

The initial fifteen years of my career were especially hard for a bibliographer because I never kept track of anything, but luckily for the past twenty-seven years I have been partnered with my aide, Joyce Harrington Bahle, who has brought a specific order to my life and work. When I saw that there were over fifteen hundred citations in this bibliography, I recalled humorously a possible gravestone inscription: “He Got His Work Done.” This seems a little more typical of the Midwest than our dream coasts. Or, perhaps better yet, as the ancient historian Nonnius said: “I have made a heap of all I have met.”