As the 100th anniversary of the U.S. entering the Great War comes to a close, we asked authors Chris Dubbs (American Journalists in the Great War: Rewriting the Rules of Reporting) and Ray Moseley (Reporting War: How Foreign Correspondents Risked Capture, Torture and Death to Cover World War II) to compare coverage of that war to World War II and subsequent conflicts. 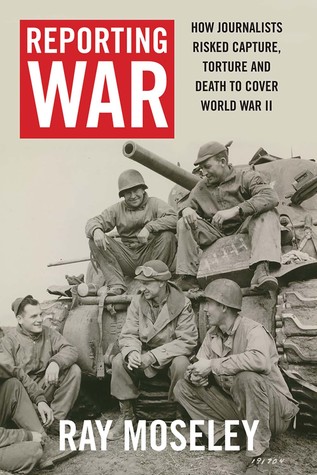 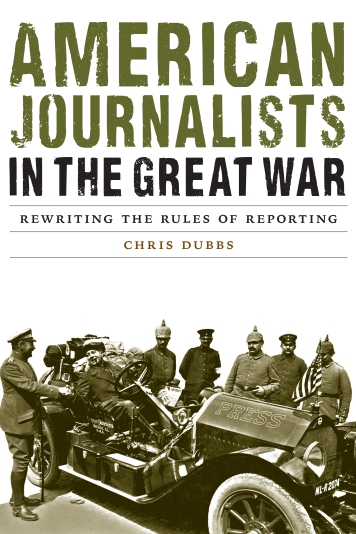 Reporting War and Controlling the News

World War I, the world’s first modern conflict, presented nations and journalists alike with challenges they had never before encountered. It served as a proving ground for news-gathering strategies and news-controlling practices that were largely duplicated in World War II and other wars ever since.

But all wars are different, and the growing nature of small and large conflicts around the world has put to the test the question of how much war reporting can rise to new challenges and the extent to which it still reflects the experience of those two global conflicts.

Journalists covering World War I dubbed the first months of that conflict the “dark ages,” in reference to how thoroughly France and Britain excluded reporters from the war zone, engaged in propaganda (an early form of “fake news”) and cloaked their actions in secrecy. Even the legendary correspondent Richard Harding Davis, with five previous wars to his credit, left Europe after the first three months of conflict, frustrated at being unable to report on the fighting. He had been refused credentials, arrested and threatened with execution as a spy.

Davis had foreseen such difficulties in a 1911 article entitled “The Passing of the War Correspondent.” In it he predicted that the use of the telegraph cable and the advent of censorship would doom war reporting. Referring to the 1898 Spanish-American War, he wrote: “The day [the journalist’s] cable from Cuba to New York was in an hour relayed to Madrid, the war correspondent received his death sentence. . .” What army would give reporters access, when sensitive military information could be exposed to the enemy in near real time? And what reader would wait days or weeks for a reporter’s reasoned assessment of an event, when headlines could be delivered instantaneously?

In the fall of 1915, after a year’s absence, Davis returned to the European war zone when belligerent nations realized the benefit of managing the news instead of stifling it. They accredited reporters from neutral nations, took them on guided tours of the front, arranged interviews with generals and visits to war-related sites. In other words, they showed them exactly what they wanted them to see.

World War II correspondents faced similar conditions. They were free to roam Allied battlefronts but were dependent on military transport and filing facilities, a practice the Pentagon adopted during the second Gulf War with its embedded journalists. In World War II, every dispatch was censored and often correspondents were reliant on official communiques that were part of what Winston Churchill later termed “a bodyguard of lies” intended to maintain public morale. Most correspondents abandoned any thought of impartiality, understandable in that this was a war for democratic survival, and they sometimes even engaged in self-censorship to serve Allied aims.

A far greater degree of critical reporting has been the norm since Vietnam, and censorship became almost impossible with the advent of satellite telephones around the time of the first Gulf war. But governments could still expel reporters whose work displeased them, or bar them from war zones, and that practice has grown in recent years.

In World War II, many dispatches and radio broadcasts never reached home offices because of what now seem primitive means of transmission. With modern communications, that does not happen but some war correspondents find that a mixed blessing, as editors can reach them more easily, often with irritating queries or demands based on ignorance of the facts on the ground.

Without question, war reporting has become more dangerous since the two world wars, both because of the greater firepower of modern weapons and the barbarism of some of the forces engaged in war. Not until the wars in former Yugoslavia did combatants deliberately fire on clearly marked cars carrying journalists, and not until the rise of Isis were some captured correspondents beheaded.

Another worrying development has been the financial crisis besetting the newspaper world, with foreign correspondents in many cases becoming the first casualties of budget tightening. When wars come along, there are thus fewer reporters available to cover them who have the detailed knowledge of history and different cultures that is vital to putting events into perspective. This dearth of expertise has encouraged freelancers, some with little or no journalistic background, to step into the breach. By the nature of their work, they are often prone to take risks that seasoned veterans know how to avoid, and some have lost their lives as a result.

The advent of social media and a growing mistrust of the news media present yet another challenge. The world is full of armchair generals and foreign policy pundits with little or no qualification for the role and sometimes bent on obscuring the truth. Likewise the internet has given contending factions a new and powerful propaganda platform that further promotes the dissemination of false information.

With the changes that have occurred, and the thinning of ranks, war correspondents have not, as yet, become the extinct species that Richard Harding Davis predicted, and the basics of war reporting remain intact. But paradoxically, the perils to this peculiar craft have grown even as technology appeared to have expanded its potential.

Chris Dubbs served in the Marine Corps during the Vietnam War and has worked as a newspaper journalist and editor. In addition to American Journalists in the Great War (Nebraska, 2017),  he is also the author of America’s U-boats: Terror Trophies of World War I (Nebraska, 2014); and is the coauthor of Realizing Tomorrow: The Path to Private Space Flight (Nebraska, 2011). He co-edited (with John-Daniel Kelley) The AEF in Print: A Journalistic Anthology of America in World War I that will appear in 2018 from the University of North Texas Press.

Ray Moseley, a former Chicago Tribune and United Press International foreign and war correspondent, is the author of Reporting War (Yale University Press, 2017); Mussolini’s Shadow, (Yale University Press, 1999); Mussolini, the Last 600 Days of Il Duce, (Taylor Trade Publishing, 2004), and a self-published journalistic memoir, In Foreign Fields (2010). A finalist for the Pulitzer Prize for international reporting in 1982, he was awarded an honorary MBE for services to journalism by Queen Elizabeth II in 2003.