Martha Louise Hipp, PhD, is a retired psychologist and formerly served as psychologist for the Fremont County District 14 federally funded schools. She is a former president of the Colorado Psychological Association. Her book Sovereign Schools: How Shoshones and Arapahos Created a High School on the Wind River Reservation (Bison Books) was published in this month.

The writing of this book was a journey of nearly twenty years that changed my life. Today I carry a wide range of deep emotions for individuals and a community I would have otherwise never known. They gave many interviews that supplied critical content and context, and hundreds of articles from newspapers provided the timeline for the story and sometimes the storyline itself.

In a way this project was a godsend dropped into my lap. Since childhood I had carried the notion that after retirement I would be a writer. And I have always felt a strong need for justice. Serendipitously, I did retire and moved to Wyoming to be near my daughter and new grandson with no thought of writing and no plan to even visit the nearby Wind River Indian Reservation where, as it so happened, there was an Indian high school, rich in Native American civil rights history.

Not long after that “retirement” I discovered I wasn’t ready for so much free time and was scouring the local newspaper for employment. When I found an advertisement for a psychologist at the Indian school I made the call with profound uncertainty. I was nervous in my interview and spoke softly. My Arapaho supervisor told me later that that is what won me the job.

The superintendent of the Indian school district, Lonn Hoffman, was a gentle and much loved non-Indian man. Soon after I was hired, he asked all professional employees to initiate individual research projects related to their work at the school. Apparently he wanted us to take a deeper look at whatever we were doing. Later, the Wyoming Humanities Council gave the school a grant of $10,000 to pursue my research and hold a conference where Indian people came from all over the country to speak about their experience.

Around the same time as Superintendent Hoffman’s assignment I learned that in some ways the Indian community had begun to feel that the school was out of touch—a distant brick building on a hill. I was still searching for a research topic when, to aid in that search someone told me that I should attend a small group meeting of Elders and school employees. After I arrived, their quiet told me that the “moccasin telegraph” had informed them of why I came; they were waiting for me to explain why I was there. So, I (so new to their world) told them of my assignment and asked for suggested topics. After more quiet, one Elder, Gerald Sage, told me that the history of the establishment of the high school was “an interesting one.” His comment was a pointed hint. 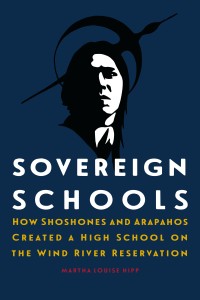 I will always remember first reading about the Indian sovereignty issue in my office, even noting the spelling of the word, and then walking past a study area where six to eight students were quietly working and one spoke up to ask me how to spell “sovereignty.” Perhaps it was a test or just an honest question but I was thankful to know the answer. Self-determination and sovereignty were the heart and soul of the school’s existence as it had been to Native American tribes since “white man” first took over.

When I began to write about the history of Indian education I found it to be very complicated and difficult to organize; I asked several people—a grant writer, two editors, two anthropologists (there were many visitors at the school), and local Indian people—to look at what I was doing. Although everyone thought it was a worthwhile project, my attempts needed many revisions. I could not begin by simply telling about the tribal community’s fight for their school. The context was too important: more than a century’s long struggle with the U.S. military, state and federal governments, and forced boarding school attendance had to be understood.

In addition to the volume and complexity of the material, I felt the emotional toll of reading descriptions of massacres, starvation, disease, hardships, and injustices suffered by the Wyoming tribes (for just one episode, see Dee Brown’s vivid description of the desperate attempts of women, children and the elderly to survive military pursuit in the ice-crusted snow of a Wyoming and Montana winter in Bury My Heart at Wounded Knee). Then came the removal of the children to boarding schools where they suffered from disease and loneliness; separated from their families, many died, children the same age as my grandson.

I began the interviews in the first year thinking I would complete the project in a year or two. Interviewing was a pleasure and not at all foreign to me given my experience as a psychologist. I went into the homes and learned first-hand of reservation life; I saw the hardship of poverty but also courage, optimism and political pro-action.

While working in the schools I observed the students’ and teachers’ struggle under requirements of the No Child Left Behind Act. It seemed to suck up most of their energy. As they prepared for tests, I read student essays and sometimes their poetry. These helped me understand better than our conversations how much difficulty they were having with the English language, in addition to the deaths of friends and family members. In spite of the free time that the NCLB testing afforded me, it was not without some guilt when I picked up a book to read or left to do an interview.

Several of my interviews were with other professionals who worked on or near the reservation. They provided invaluable corroboration of the experiences recounted by the students and tribal community; the County Coroner gave me the shocking death statistics; my daughter, Heidi Badaracco, who had begun work some years earlier for the reservation’s Oil and Gas Commission (now over the Tribal Liaison Office with the federal Office of Natural Resources and Revenues) told me the rules governing much of the tribal incomes; and my husband, Richard, an attorney for legal aid (now retired), helped me with the federal rules for reservation life.

Most importantly, many tribal members came forward to be interviewed; trust in their superintendent and the Elders’ interest in seeing the history of their school portrayed and preserved ameliorated any cultural distance. Those interviews gave me a connection to that “other” world outside of my little windowless office in the school, separate from the town where I (and many of the teachers) lived. But, I must say, I look back with some disturbance on the “English” greetings so graciously given, perhaps many times a surface that covered psychological pain, illness and mistrust.

I feel sure that anthropologists have noticed this before my time working in their field; “subjects” of a study in a tribal community are usually put off by our “American,” self-aggrandizing presence. I sometimes felt their skepticism about who I was, what I thought. The Arapaho, though, have a sense of humor; in the springtime I was told, they notice and advertise, “the ‘Anthros’ are coming, the ‘Anthros’ are coming!” And school employees from outside are not above the ridicule. One tribal employee told me of a packed Volkswagon bus that arrived one fall day bringing in a new employee, only to be seen quickly leaving the next, still packed. He could hardly contain his laughter.

But as the tribal people entrusted their amazing story to me, I developed a profound sense of responsibility for its safekeeping. The iconic school that came to be helps preserve ancient cultures and teachings. My participation as scribe of its creation provided a fulfilling purpose for this latter part of my life.

When my husband and I left about seven years after arriving and a dozen years before this book was published, I brought voluminous files with me and memories impossible to erase. I became a writer and never went back to being a psychologist. And, my grandson is at Fort Lewis (originally a federal Indian college) studying to be an “Anthro.”

2 thoughts on “From the Desk of Martha L. Hipp: Learning to Spell “Sovereignty””