The most successful film franchise of all time, Star Wars thrillingly depicts an epic multigenerational conflict fought a long time ago in a galaxy far, far away. But the Star Wars saga has as much to say about successful strategies and real-life warfare waged in our own time and place. Strategy Strikes Back brings together over thirty of today’s top military and strategic experts, including generals, policy advisors, seasoned diplomats, counterinsurgency strategists, science fiction writers, war journalists, and ground‑level military officers, to explain the strategy and the art of war by way of the Star Wars films.

Each chapter of Strategy Strikes Back provides a relatable, outside‑the‑box way to simplify and clarify the complexities of modern military conflict. A chapter on the case for planet building on the forest moon of Endor by World War Z author Max Brooks offers a unique way to understand our own sustained engagement in war-ravaged societies such as Afghanistan. Another chapter on the counterinsurgency waged by Darth Vader against the Rebellion sheds light on the logic behind past military incursions in Iraq. Whether using the destruction of Alderaan as a means to explore the political implications of targeting civilians, examining the pivotal decisions made by Yoda and the Jedi Council to differentiate strategic leadership in theory and in practice, or considering the ruthlessness of Imperial leaders to explain the toxicity of top-down leadership in times of war and battle, Strategy Strikes Back gives fans of Star Wars and aspiring military minds alike an inspiring and entertaining means of understanding many facets of modern warfare. It is a book as captivating and enthralling as Star Wars itself.

“As the contributors show, teachers can use examples from the Star Wars movies to demonstrate the importance of paying attention to vulnerable societies (the lack of development on Endor), the limitations of modern military training (Jedi training, which separates soldiers from the people they serve and is far too geared toward individual combat), the dangers of an overreliance on technology (the empire’s dependence on the Death Star), and common errors of grand strategy (Yoda’s overconfidence in the Jedis’ ability to protect the republic).” —Foreign Affairs

“Strategy Strikes Back succeeds in illuminating the parallels between war-fighting in speculative fiction and the real world. It opens strategic thinking to non-expert audiences, and prompts experts to reason creatively about the role of force—and indeed the Force—in establishing and maintaining political order.” —H-Net

These essays are not only enjoyable and thought provoking for Star Wars fans…they allow the authors to incorporate very serious themes without overwhelming the reader with a lot of acronyms and jargon common to “serious” books on military strategy.” —New York Journal of Books

“Combine a witty title and jacket typography with 30 “top military and strategic experts” and you’ll find a galaxy of analyses about the “balance, care and empathy to achieve the strategic advantage we need.” —Military Times

“Strategy Strikes Back: How Star Wars Explains Modern Military Conflict certainly achieves their intended outcome. No new concepts or grand theories were intended to come from this book, but readers are sure to understand better some of the most notable and valuable concepts surrounding modern conflict currently under debate.” —The Strategy Bridge

“For Brooks and the other contributors, Star Wars is the perfect intersection of pop culture and weighty sociopolitical issues. ‘It deals with everything, every single subject that you would find at a Strategic Studies group at the Pentagon’ Brooks explains.” —article in Playboy 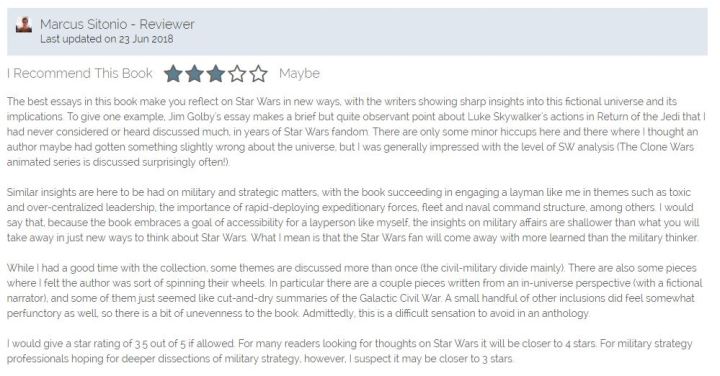 Marine Corps Gazette is proud to unveil our new blog. A "Warfighters Book Club" wherein we ask Marines to read specific book and debate the merits of its message. MajGen W. F. Mullen has provided: "Strategy Strikes Back" and the first review. https://t.co/ecwu3wnEPv pic.twitter.com/GyhOxNzo4p

Do you love Star Wars? Do you also love regular wars? If so, turn up next Friday night, 5/18, 7pm, to hear former military strategist @MLCavanaugh talk about STRATEGY STRIKES BACK: How Star Wars Explains Modern Military Conflict. Details below!https://t.co/xbPcgafbLr pic.twitter.com/qivph3dDY2

You also end up ordering two because you forgot one was already in your queue.

Your welcome authors in my twitter feed, the check is in the mail. #dutychronicles

#PWPoePrompts Day 6: my current reads are all from the library. Most recent is Strategy Strikes Back, because I write military sci-fi and I like to keep up on my research.

I'm currently reading A Wind in the Door and the illustrated Harry Potter to my 9 yr old. pic.twitter.com/Xu8HFpuqOW

Tomorrow (4/26) we'll be hosting Matt Cavanaugh for an author reading and discussion of STRATEGY STRIKES BACK, an exploration of strategy and the art of war by way of the Star Wars films. Please note that there will be no free starfighter parking for this event. #UCCS pic.twitter.com/M9Dyc8xzrf

A Word from ML Cavanaugh: 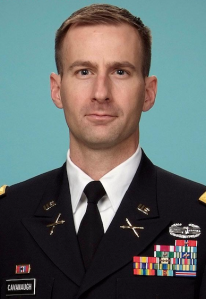 Nobody remembers my birthday anymore. Heck, I’ve actually forgotten it most of the past few years. Does it really matter if I’ve been on the planet for 14,599 or 14,600 days (the changeover point from 39 to 40 years old)?

But my book? It had a birthday! And someone in Nebraska named Rosemary knew that! She remembers! She emailed me about it!

Wait a minute, how could she have known? Maybe she has one of those fancy calendar programs that reminds you to floss and post it on Instagram? Or maybe she’s got a tiny hand-letterpressed personalized desk calendar with gold-embossed edges? Or she might just be the only Cornhusker in the entire state that doesn’t hold a significant part of her cognitive abilities in reserve for college football-related activities, and therefore she’s some sort of super Nebraskan.

But what I do know is that it’s an honor to be a part of a publishing family that remembers an anniversary, that doesn’t let the relationship grow stale, especially for a book that my team of writers and editors (and I) are all so proud to have brought into the world. Strategy Strikes Back: How Star Wars Explains Modern Military Conflict did very well with the most dignified reviewers (at Foreign Affairs) as well as with reviewers in a certain not-quite-as-dignified publication (Playboy). None of it would have happened without everyone at Nebraska Press (Rosemary!), and we’re looking forward to many more birthdays just like this one.

Always remember—May the Force be with you! (And it can be yours for the mere cover price, plus shipping and handling.)