Char Miller is the W.M. Keck Professor of Environmental Analysis and History at Pomona College. Miller’s other books with the University of Nebraska Press include the co-authored third edition of Ogallala: Water for a Dry Land and the forthcoming co-edited volume, Theodore Roosevelt: Naturalist in the Arena. He is also the author of America’s Great National Forests, Wildernesses, and Grasslands and Not So Golden State: Sustainability vs. the California Dream.

Elers Koch did not suffer fools gladly, as his iconic memoir, Forty Years a Forester, makes abundantly clear. But he would have admired Vicki Christiansen, the current chief of the US Forest Service, for her forthright and insightful comments about the need to let some wildfires burn.

Ok, he first would have to get over the fact that Christiansen is the second woman to lead the agency; his Forest Service had been hyper-masculine. But he would have no problem with her insistence—in the Wall Street Journal (October 5, 2019, C6), no less—that forest fires can be an ecological good. Or that some conflagrations, like the monstrous 2018 Camp Fire, are such powerful “hurricane fires” that no amount of management will stop their initial run. Or that whatever their size, not all wildfires should be suppressed.

Koch, who fought the devastating Great Fires of 1910, would have fully supported Christiansen’s perspectives because he was among the first agency employees to argue against the wholesale application of the Forest Service’s “10:00 a.m. Rule.” Articulated in the early 1930s, this policy stricture required that all fires should be extinguished the morning after they were spotted. Koch knew better, having battled any number of blazes during his four-decade career, including the brutal fire seasons in the northern Rockies across the teens (1910, 1914 and 1919), the twenties (1925, 1926, and 1929), and then those that erupted during the Great Depression (1931 and 1934).

His long experience with wildfire and his ability to capture the on-the-ground realities of fighting their incendiary force make for some of the most compelling passages in Forty Years a Forester. In one such gem, Koch compares firefighting to combat due to its “extreme physical exertion, long hours, lack of sleep, and a constant nervous tension.” All of which he infused in his depiction of a fire crew’s emotional response as it marched toward an out-of-control blaze: “when one looks up toward the destination and sees an enormous threatening thunderhead crowding up into the sly, indicating a wild crown fire, it is understandable that one sometimes has a feeling of butterflies in his stomach. In a way it is like troops moving in to the front lines and listening to the artillery and shell bursts ahead.”

As gripping, though, was Koch’s argument that battling every wildfire, as the “10 a.m. Rule” prescribed, was of limited utility. He went public with his disagreement with the Forest Service’s directive in an article published in the Journal of Forestry in 1935, his profession’s most important venue; it also serves as the concluding chapter of Forty Years a Forester. In the article, entitled “The Passing of the Lolo Trail,” Koch lays out a critique of the agency’s and his own actions in the northern Rockies. Convinced that foresters could and should fully manage the national forests, the Forest Service “sounded the note of progress,” which a younger Koch had uncritically embraced. Together with his colleagues, Koch helped open up “the wilderness with roads and telephone lines, and airplane landing fields. It capped the mountain peaks with white-painted lookout houses, laced the ridges and streams with a network of trails and telephone lines, and poured thousands of firefighters year after year in a vain attempt to control forest fires.”

What was the collective impact of these actions, he wondered. “Has all this effort and expenditure of millions of dollars added anything to human good?” 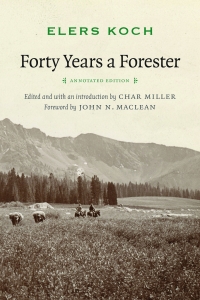 The question was rhetorical. Koch believed that the answer was a resounding no. Yet he offset his negative response with a positive, constructive proposal. In it, he urged the Forest Service to experiment in the northern Rockies by designating “a carefully defined unit of about two million acres as a low-value area which does not justify the cost of fire control.” In this terrain, the agency henceforth would only maintain “existing roads and the major trails” and more importantly would withdraw “the entire fire-control organization and retain only a police force of two or three rangers to protect the game and direct recreational use.” By doing so, the agency would give nature a chance to recovery and the Forest Service an opportunity to regain its balance. “If a mistake has been made it is better to recognize it and change the mistaken policy,” Koch counseled, “than to plunge blindly ahead because a certain line of action has been started.”

Although the Journal of Forestry editor initially rejected Koch’s article due to its paradigm-challenging argument, under pressure from the agency itself he reconsidered. One consequence of its publication was that in 1936, a year after Koch’s article appeared, the Forest Service announced the creation of the 1.8 million acre Selway-Bitterroot Primitive Area; it is not by happenstance that it covered much of the area that Koch had described in his seminal essay. The Selway-Bitterroot was established under the agency’s L-20 Regulation, which defined a Primitive Area as a landscape that maintained “primitive conditions of transportation, subsistence, habitation, and environment to the fullest degree compatible with their highest public use.” Although the Selway-Bitterroot was not the first such designation—that honor belongs to the Gila Wilderness (est.1924)—its establishment is especially significant, given that  Koch’s advocacy of it was intertwined with his insistence that the Forest Service stop firefighting within this wilderness domain.

An echo of his principled stance can be heard in Forest Service Chief Vicki Christiansen’s assertion eight decades later that the “10:00 a.m. Rule” has been supplanted by a more ecologically sensitive approach. Under certain conditions, she notes, fire is being returned to the national-forest system, a biochemical intervention that is regenerating woodlands and grasslands and making them more resilient.

For Elers Koch, there’s nothing foolish about those beneficial outcomes.