Happy University Press Week! Today the UP Week Blog Tour’s theme is “How to Build a Community.” The following is a guest post from Katya Cengel, a freelance writer and journalist who has worked around the world. She discusses the relationships she made through the writing of her book Exiled: From the Killing Fields of Cambodia to California and Back (Potomac Books, 2018). 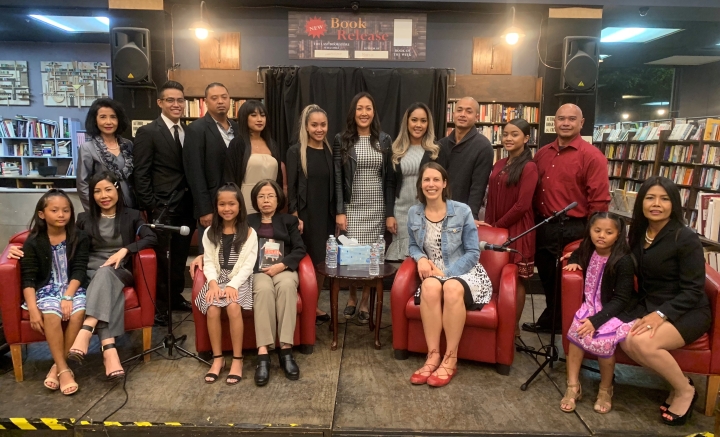 The lightweight poster-stand announcing who was at the booth kept blowing over. At first, I got in the habit of picking it up after every gust of wind. Then I realized it didn’t matter—everyone at the 2019 Cambodian Town Culture Festival already knew who Song Chhang was and where to find him, they didn’t need the poster to tell them. A former Cambodian minister, Song is respected by many in the Cambodian American community for his past accomplishments, his wisdom and his advanced age.

How I ended up seated beside him is a little more difficult to explain.

My blue eyes and six-foot stature pretty clearly mark me as an outsider in the Cambodian American community in Long Beach, California. Yet there I was, seated next to one of the community’s respected members, a man parade attendees continually stopped by to greet, placing their palms together and bowing their heads. When they realized that Song knew and trusted me and had been featured in my book Exiled: From the Killing Fields of Cambodia to California and Back they too seemed to trust me and accept me.

That day I sold Exiled alongside books written by Cambodian American authors. The sister of one of the authors later helped to promote Exiled. To this day whenever I post something about Exiled, she follows up with an encouraging message. Sitting there at the culture festival I felt, while not part of the community, accepted by it.

It was really that simple, and yet it hadn’t always been.

When I set out to write Exiled, I reached out to a number of people and organizations working with or belonging to the Cambodian American community in Long Beach. Months of outreach passed, and I made little progress. When phone calls and emails went unanswered, I started making personal visits to Long Beach.

It was on one of my first visits that I met Song. We had been introduced by a mutual acquaintance. Due to Los Angeles traffic and confusion over the meeting time I showed up more than an hour later than expected. Song didn’t seem to mind. He spent several hours talking with me and then called another acquaintance he thought I would want to meet. Not trusting my rather shaky ability to find addresses in the city in a timely manner, Song’s girlfriend enlisted her grown daughter to direct me. The daughter expressed no annoyance at having her day interrupted, just curiosity. Within a few minutes of our meeting she too was trying to help me find people to interview for my book.

I did not meet San Tran Croucher through Song or his family, although they know each other. I met San through another community member. A mother of three grown daughters, San wanted to tell her story about what she had endured under the Khmer Rouge in Cambodia and the possible deportation her eldest daughter was then facing. It was San’s middle daughter, Sithea, and Sithea’s husband, Richer, who later invited me to take part in the 2019 culture festival.

In the year or two that I spent researching and writing Exiled I had gotten to know all of San’s daughters as well as several of her grandchildren and even a few great grandchildren. Four generations of her family attended my book signing in Los Angeles. The venue would not hold the signing unless more than a dozen books were bought in advance and it was thanks to San’s family and their friends that this happened. Although San and her oldest daughter Sithy were the only ones on stage with me during the event, dozens of other family members joined us to take photos on stage before and after. During the question and answer segment Sithea took the microphone for so long it seemed for a while as if it was her event. In a way, it was.

That San’s family had made the event their own did not bother me, it made me proud. They had trusted me with their stories and in doing so had allowed me a limited entrance into their community. Their acceptance may not be that surprising considering how long I spent with them. Except that I spent that time as a non-fiction author recounting their story with compassion, but also with honesty that did not conceal unpleasant truths. More surprising was the response I got from members of the community who I knew only because they had read my book or had agreed to help me promote it. After sharing the stage with one such woman she thanked me for writing about her community. I was touched—and surprised. I was the one who should be thanking her and the rest of the community for trusting me to help tell their stories.

Read what other University Presses are discussing today:

Syracuse University Press: A post from Sean Kirst, the bestselling author of The Soul of Central New York, focusing on the theme of “community.”

Georgetown University Press: Description of GUP’s new mission statement and the importance of local and global communities of readers.

University Press of Kansas: A post describing how UPK has worked with local Lawrence companies to increase awareness of the Press and support independent breweries, bookstores, shops, and a new literary festival.

Johns Hopkins University Press: Acquiring editor in public health and health policy Robin W. Coleman writes about the forthcoming book The Black Butterfly: Why We Must Make Black Neighborhoods Matter by Lawrence Brown and how scholarly writing and publishing can be a form of activism.

MIT Press: How the MIT Press Bookstore uniquely sits at the intersection of Press, scholarship, authors, and community.

University of Toronto Press Journals: Building a community for the Journal of Scholarly Publishing’s 50th anniversary.

University of Toronto Press: Exhibits and Awards Coordinator Vannessa Barnier draws from her experience organizing events within the university press community as well as literary events for a slightly different audience.

Vanderbilt University Press: A look at a local organization that Vanderbilt UP is partnering with—the Nashville Adult Literacy Council—and the ways it actively builds a community of learners and volunteers.