Book Birthdays celebrate one year of a book’s life in tweets, reviews, and more. This month we’re saying Happy First Birthday to Left to the Mercy of a Rude Stream: The Bargain That Broke Adolf Hitler and Save My Mother (Potomac Books, 2018) by Stanley A. Goldman.

Seven years after the death of his mother, Malka, Stanley A. Goldman traveled to Israel to visit her best friend during the Holocaust. The best friend’s daughter showed Goldman a pamphlet she had acquired from the Israeli Holocaust Museum that documented activities of one man’s negotiations with the Nazi’s interior minister and SS head, Heinrich Himmler, for the release of the Jewish women from the concentration camp at Ravensbrück. While looking through the pamphlet, the two discovered a picture that could have been their mothers being released from the camp. Wanting to know the details of how they were saved, Goldman set out on a long and difficult path to unravel the mystery.

After years of researching the pamphlet, Goldman learned that a German Jew named Norbert Masur made a treacherous journey from the safety of Sweden back into the war zone in order to secure the release of the Jewish women imprisoned at the Ravensbrück concentration camp. Masur not only succeeded in his mission against all odds but he contributed to the downfall of the Nazi hierarchy itself. This amazing, little-known story uncovers a piece of history about the undermining of the Nazi regime, the women of the Holocaust, and the strained but loving relationship between a survivor and her son.

“After Steven Spielberg released his epic film ‘Schindler’s List,’ Holocaust survivors would approach the director and tell him, ‘That’s a great movie, but let me tell you my story.’ That anecdote came to mind when reading the new book by Stanley A. Goldman, Left to the Mercy of a Rude Stream... Goldman, a professor at Loyola Law School who founded its Center for the Study of Law and Genocide, deftly mixes his personal experiences growing up the son of a survivor and the events surrounding the crash of Hitler’s 1,000-year Reich.”—Jewish Journal

“The son of a Holocaust survivor rehearses the horrors of his mother’s captivity, the improbability of her survival, and the deleterious lingering effects on her—and him… Her dark memories never left her, and Goldman describes his own difficulties dealing with her as she aged and struggled. The author works hard to maintain a scholar’s tone in his text, but throughout, he also shows us the blood of millions seeping through his pages. A welcome excavation of an obscure corner of Holocaust history.”—Kirkus Review

“This powerful book is a spellbinding narrative of the horrors his mother endured during the Holocaust, the amazing secret of her survival, and the residual results this had on her and her son.”—Desert Star Weekly

“This is a well-written page-turner for any reader wanting a different perspective on Nazi atrocities. The author effortlessly moves from the general to the particular and back as he puts his mother’s plight in context… it is well-documented history, but it’s more than that. I can understand why Mr. Goldman felt he had to tell his mother’s story. It is a compelling one, and every reader who pretends to understand this dark era in human history should read it.”—Bookpleasures.com

“Left to the Mercy of a Rude Stream certainly succeeds in telling a Holocaust survivor’s story within that enormous historical context…Stan Goldman tells us through the story of his mother’s harrowing survival that there are still millions of more stories about the Holocaust, and there should be a never ending quest to bring out these stories for future generations to become more aware of such an unspeakable tragedy, and continually end the ignorance so that it could never happen again.”—Montreal Times

New to our #collection – 'Left to the Mercy of a Rude Stream' by Stanley A. Goldman @LeftRude. This amazing, little-known story uncovers a piece of history about the undermining of the Nazi regime & women of the Holocaust. Available in our #ReadingRoom: https://t.co/yUfLJEoQ0t pic.twitter.com/wwAno8tdj7

Author Stanley A. Goldman, whose recent book, “Left to the Mercy of a Rude Stream” tells of his mother’s experiences as a Holocaust survivor, on today’s Breaking It Down 2pm EST 103.9-FM LI News Radio, or online, all info – https://t.co/RAqLBEHhmW pic.twitter.com/QyobpZzMYv

ICYMI: Prof Stanley Goldman discussed his book "Left to the Mercy of a Rude Stream: The Bargain That Broke Adolf Hitler and Saved My Mother" w/ @WGNRadio. Listen as he unravels the mystery of his mother's improbable release from a WWII concentration camp. https://t.co/PawudlUQHW pic.twitter.com/MjJPwh6kes

Tomorrow! Meet Stanley A. Goldman at Downtown Central Library. He will discuss his memoir "Left To The Mercy Of A Rude Stream." For more info on event visit https://t.co/XQOcbfqysU pic.twitter.com/l70J8j2sbU

#Books #Reviews Left to the Mercy of a Rude Stream by Stan Goldman book review: On April 21, 1945, as Nazi Germany was about to collapse thanks to the rapidly advancing Allied armies of Russia, the U.S. and Britain to Berlin that would conclude with… https://t.co/q7NS4diney

In "Left to the Mercy of a Rude Stream: The Bargain That Broke Adolf Hitler and Saved My Mother," @LoyolaLawSchool Prof Stanley Goldman documents the release of his mother from the #Nazi #concentrationcamp at Ravensbrück, Germanyhttps://t.co/dcKp6DPYZc pic.twitter.com/A1qHnS8kSJ

A Word from the Author: 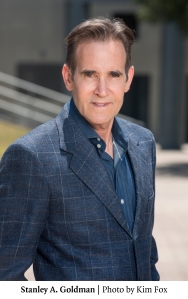 Within a couple of weeks of publication I was invited on the podcast Writer’s Block. The hosts informed me that in their years of interviewing authors, mine was one of only two nonfiction books they had ever covered. Their reason, as I would hear from many others who have reached out to me, was that the book read more like a novel than any recent nonfiction they had come across. I had managed, they said, to piece together and tell so dramatic and improbable a story of survival and rescue that those reading it could justifiably assume it must be fiction. Similarly, an English literature professor who read the book assigned it in a course reserved for the study of novels. I accepted her invitation to speak to her generation-Z university undergrads, who expressed gratitude for having made accessible to them a history that they had previously known little about, and also wanted to know if there were any “tricks” I could impart as to how they might similarly translate actual events to the written page. I gave a simple answer— start with an amazing story you just have to tell and be prepared to keep reworking until hopefully your descriptions do justice to the truth.