The following is a book trailer and an excerpt from The Mysterious Sofía by Stephen J. C. Andes (December 2019), the newest addition of the The Mexican Experience series.

As the Mexican Revolution developed, Sofía del Valle spent her remaining formative years in Europe, alternating between Villaviciosa, Asturias (Spain), her father’s hometown, and Lausanne, Switzerland. In Lausanne Sofía encountered a cosmopolitan world; in school she met students from various parts of Europe. She learned to command French and English and developed friendships with girls from diverse religious traditions, especially Jewish émigrés to the city. Sofía recounted, “We had contact with young people from different European countries and different religions. This helped us to expand our view of life, to under-stand better what the world is and more than once, to get some good little lesson helpful for the future.” These lessons came not only through her studies at the Catholic Institute of Lausanne, which she attended every morning, but also through her studies at a Jewish school called “Bonne Brise.” There she recalled a friendship with a young Jewish girl who challenged her character: “I find that your judgments in general are very quick; you don’t wait to have all the necessary information before airing them. I recommend this phrase that has helped me in life: D’abord comprendre et ensuite juger” (First understand and then judge).

Sofía recalled that her friend’s words affected her deeply. Speaking her mind was never a problem for the young Sofía. But, even as a young woman, she realized her judgments had to be based in real facts. Sofía later remembered her friend was not just recommending the adage, “think before you speak.” She was telling Sofía to understand. For Sofía, that meant education, reading, consultation, introspection, and investigation. Sofía came to believe her opinions were only as good as her preparation.

But how close to that ideal did she come in her younger years? Certainly as an old woman she looked back on the incident as significant, a “good little lesson helpful for the future.” Perhaps over time she came to develop a reserve in airing her opinions in the pursuit of a just appraisal of people and circumstances. And yet the experience of failure to keep an ideal is a painful teacher. Sofía, to at least one young Jewish girl, was not only quick to make judgments, but also unafraid to voice unfounded opinions. We don’t know what the interaction entailed. Was Sofía brash? Was it simply teenage arrogance? Backbiting? Gossip? Or was it religiously motivated, fueled by awkward misunderstandings and prejudices between a Jewish girl and a Catholic one? At any rate, this didn’t seem to be the first time Sofía’s judgments and opinions had caused conflict with those around her. Sofía often had strong words with her sisters. She could be short with them—even in later years members of the del Valle family would remember Sofía’s clashes with her younger siblings. Sofía, in her late teens and early twenties, was a young woman with a sharp mind and, at times, a sharp tongue. She believed her opinions should be heard, even when the demands of deference recommended silence.

Sofía’s years in Europe tell us also about Sofía as a developing woman: her emerging understanding of femininity and sexuality. The ideal of feminine beauty was in flux when Sofía arrived in Lausanne in 1907. The Victorian era had been all about tiny waists, large busts, and still larger behinds—an illusion kept up, quite literally, through corsets, bustles, and crinoline underskirts. By the first decade of the 1900s more slender silhouettes appeared, still with accentuated bust and hips, but more statuesque. Dresses became slightly more functional and bell shaped. In America the new look was called the Gibson Girl. The Gibson Girl ideal encompassed both a new fashion sense and a new sense of free-dom. She was athletic, flirty, independent—a woman with a larger say in her sexual choices. Women’s hairstyles were swept up in bouffant, pompadour style or worn as loose curls piled atop the head. Shirtwaist blouses hung over cinched waistlines. Suit jackets for women fitted over skirts that exposed shoes and even showed some ankle. Hats expanded.

The real, shocking change was in undergarments as designers began dispensing with corsets. Female bust support needed a new garment. It was called the bandeaux, the bust extender, the bust supporter, the bust shaper, and most commonly, the bust bodice or the Soutien-gorge. Finally, by the onset of World War I, “brassiere” became the conventional name.

Hats, hairdos, and “bras” defined the changes in fashion Sofía encountered through her own emergence into early womanhood. The hats and hairdos are easily identified in photographs of Sofía from the era; the undergarments, less so. In one picture, Sofía appears with her schoolmates shortly after her arrival in Lausanne. It was probably taken around 1908. She would’ve been seventeen. Sofía and the other young women have big hair, puffed and curled and back brushed to achieve the bouffant, pompadour style. Some of the younger girls still have braided hair; they wear sailor suits indicative of styles for children. But not Sofía. She wears a shirtwaist blouse, billowing over a belted waist. Whether she wore a bust bodice or simple corset is unclear. But her silhouette is certainly not the exaggerated S-curve of the late Victorian era.

Another photograph shows Sofía and her sister, Matilde, a few years later, probably between 1910 and 1912. She would’ve been around twenty. Their silhouettes are straighter, their suit jackets tailored, but without the severely cinched waist of a few years earlier. Their hats and hairdos are still big. They were clearly within the fashion stream of their day, but in a comfortable mainstream. They weren’t pushing the boundaries of acceptable wear for respectable young women, nor were they lagging behind. 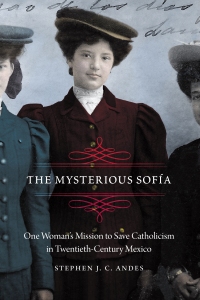 Hats, hairdos, guesses about undergarments—what do these tell us about Sofía as a young woman? They signal class and social status. She was firmly in the upper crust of society. Her family had the means to educate Sofía at good schools. Sofía had the resources to pay attention to fashion trends and to wear fashionable clothes, even selectively. Yet Sofía was also a Catholic young woman. She wasn’t at the avant-garde of fashion fads; her manner of dress wasn’t scandalizing to her parents. Still, she paid attention to beauty, to presenting herself as distinctly feminine within the conventions of feminine beauty at the time. She wasn’t a liberated bon vivant of the Belle Époque. But neither was she a homely schoolmarm- in- training; she wasn’t prudish and unconcerned with worldly beauty. The stereotypes don’t fit Sofía—liberated or repressed. She was probably a better representation of a young woman of her class and religion than either of the two extremes.

Choices about fashion and beauty call to mind other choices Sofía made as a young woman: choices about sexuality.

The question assumes the stereotypes of Sofía’s own day: that an eligible young lady would surely want to marry. Catholicism in that era urged either marriage or the convent. But Sofía seemed unafraid to postpone a decision on the issue. She remembered vividly how her father, when the family lived in Lausanne, received an offer of marriage for Sofía from a distant family relative. Because Sofía was just sixteen, her father didn’t believe she was ready for an engagement and politely refused the proposal. Later he humorously recounted the proposal to his daughter. Sofía herself was relieved; romantic attachment was not on her mind at the time.

It seems reasonable enough that Sofía, at sixteen, didn’t want an engagement to a distant relative. The situation, however, does speak volumes about Francisco del Valle. He appeared cognizant of what his daughter might want or not want in the matter, instead of being overbearing. What he sought for his children was a good education. Francisco was in the habit of saying, Sofía recalled, “I am not going to leave my children money, because money can be robbed from any-one, or someone could marry one of my daughters for it, whatever it might be . . . no . . . I will leave my children education.” Education for daughters was not a foregone conclusion in 1910. Sofía’s father valued the development of his daughters’ minds, not as a function of attracting a mate, but as an asset they might hold for whatever the future would bring.

What, if anything, do we learn of Sofía’s choices about sexuality?

Apart from this early proposal, Sofía never spoke about any romantic attachments, potential or otherwise. Her later interviews are silent on the issue, other than to say she didn’t feel a call to marriage. Sofía’s letters make no allusion to a boyfriend or to young infatuation. On the other side of the spectrum, Sofía never expressed a desire to be a nun, to join a religious order like her sisters Hortensia and Consuelo. In fact, she made sure to distinguish herself from the consecrated life, often taking offense at the suggestion that she was a nun, as she later traveled alone, as a single woman past the age when most women had already married. When faced with the conventional choices of a Catholic young woman—marriage or the convent—she would end up choosing neither. What she chose was celibacy, to live a celibate life of service.

Although modern readers may suspect otherwise, Sofía’s celibacy didn’t cover for something else, whether it be homosexual attraction, an asexual orientation, or a negative view of married, heterosexual intercourse. Her choice for celibacy was a sign of her power to decide. Past generations of young women might’ve become nuns to experience a life free from the responsibilities of marriage and children. Sofía didn’t have to make that choice. Society was shifting. Women went to university. They became doctors, lawyers, teachers, and office workers. Women, especially single ones from well-established families, could become professionals. The church, for its part, gradually and over time accepted the role of young single women as activists.

The life of a single woman had its benefits. Nuns were free from family responsibility, but were the object of tighter scrutiny, more surveillance, than laywomen. They rarely, for instance, were allowed to travel alone. Although the church desired young women to see themselves as mothers-in-the-making, male clergy could be pragmatic too. Single laywomen, argued an increasing number of churchmen, were needed to speak in public defense of the church, even to devote all their activities to the effort. The church needed women, and this opened a space for them to take up leadership roles. But there was a caveat: Sofía’s independence, as a lay celibate woman, was bounded by the recognition of her parents’ authority—which she always foregrounded—as well as by the close relationships she formed with Mexican clergy. She nodded to the spiritual direction of prominent bishops and priests. She always finished her letters to spiritual leaders by signing off as “una hija en el Señor” (a daughter in the Lord). Sofía’s choice for celibacy, although not without its Catholic limitations, empowered her unlike her married and consecrated sisters.