Book Birthdays celebrate one year of a book’s life in tweets, reviews, and more. This month we’re saying Happy First Book Birthday to Dream Like a Champion: Wins, Losses, and Leadership the Nebraska Volleyball Way (Nebraska, 2017).

Since becoming the Nebraska women’s volleyball coach in 2000, John Cook has led the team to four national championships, seven NCAA semifinal appearances, and the nation’s top winning percentage in women’s volleyball. In Dream Like a Champion Cook shares the coaching and leadership philosophy that has enabled him to become one of the game’s winningest coaches.

Growing up in San Diego, Cook acquired his coaching philosophy from his experiences first as a football coach, then as a student of the sport of volleyball on the beaches of Southern California. After a stint as an assistant volleyball coach at Nebraska, he returned to Nebraska as head coach in 2000 and won the national championship in his first season. Even with a bar set so high, Cook saw at Nebraska’s tradition-rich program the potential for even greater growth and success. He decided to focus on higher expectations, training, motivation, goal setting, and other ways to build the strongest teams possible. 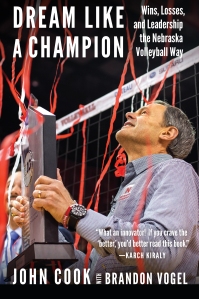 With co-author Brandon Vogel, Cook shares the philosophy behind Nebraska’s culture of success and reveals how he’s had to learn, evolve, and be coached himself, even in his fifth decade as a coach. With openness and candor he delivers insights about his methods and passes along lessons that can be used by leaders in any field. Cook also shares behind-the-scenes anecdotes about Nebraska volleyball moments and players—and how he coaches and teaches his players about life beyond the court.

“If you’re a Nebraska volleyball fan you should own this book.”—Jon Johnston, Corn Nation blog

“For all coaches and people who bleed Husker red, this a great read. . . . Cook admires the special qualities that can come from a small-town Nebraska athlete; other coaches across the state have taken notice, too. These athletes are generally family oriented, hardworking, and possess good qualities that help lead to championship cultures. That’s the Nebraska way, and John Cook reveals how he understands the value these athletes can bring to his program.”—Nicole Venditte, Great Plains Quarterly

Husker volleyball coach, @jcook2 doing an outstanding job of delivering his signature speech, "Dream Big, Dream Like a Champion!" at two @BASF events in NE. Contact MSB today to hear John share his philosophies and stories on teamwork, culture, and what it takes to be a champion! pic.twitter.com/zvnZl5k3qD

John Cook's book, "Dream Like A Champion," is available for preorder at: https://t.co/1i1RNhSb0y It is excellent. pic.twitter.com/re2wO114bV

John Cook is a two-time winner of the American Volleyball Coaches Association National Coach of the Year award and was inducted into the American Volleyball Coaches Association Hall of Fame in 2017. Brandon Vogel is the managing editor of Hail Varsity magazine and has covered University of Nebraska athletics since 2011. His sportswriting has been featured by FoxSports.com, the Guardian, and CBSSports.com.

A word from Brandon Vogel:

I learned at your birthday party that I deal better with my own aging than yours. I expect to get older each year, but I was surprised to learn you had as well. Maybe that’s because you don’t look a day over pub date. Maybe it’s because I don’t want to admit it. The knowledge you contain is still relevant, Nebraska volleyball coach John Cook continues to win games, and I think you’re pretty timeless.

But continuing to hear from people about you has helped on that front. It puts a spring in your step. College volleyball coaches, contemporaries of Coach Cook, have sent their praise, but your reach far exceeds that of the sport you’re about. High school speech and football coaches are finding things they need here, too. That’s what we hoped for you a year ago and to still hear it now never gets old.

Thanks, book. Wishing you many more years of steady readers.

The celebrations can continue with the paperback edition of Dream Like a Champion that includes a new chapter on the 2017 NCAA Championship season—now available!